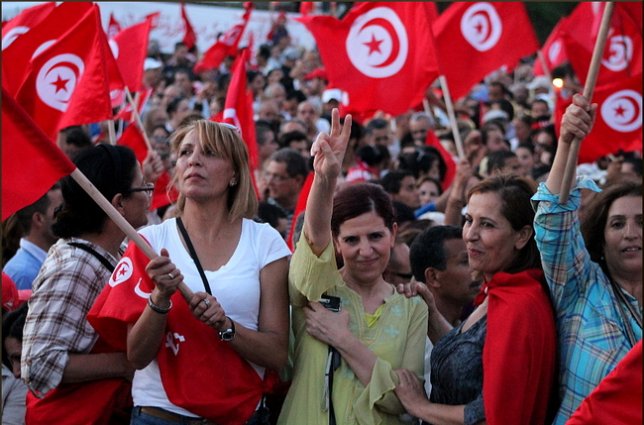 Gender Equality in Tunisia: Still A Long Way to Go

August 13, is a milestone in the history of women’s emancipation in Tunisia. In 1956 and just a few months after the independence of the country, the new government promulgated the code of personal status that abolished polygamy, set up a judicial procedure for divorce and required that marriage would be performed only through mutual consent. Also, since the 1960’s Tunisian has been providing health access for women and it was the first Muslim country to legalize abortion, two years before its legalization in France.

After the January 14, 2011 uprising, Tunisian women occupied public spaces, rallying and protesting to resist the first Islamist –led government attempt to degrade her status and to ask for much more deserved rights, so as to reach for total gender equality. Is the game worth the candle?

First, the 2014 New Constitution stipulates that the State is committed to protect women’s established rights and ought to strengthen and develop them. Besides, article 20 clearly states that all male and female citizens have the same rights and duties. “They are equal without discrimination,” it clarified.

Another significant achievement. In 2017, Tunisian Parliament adopted a law meant to eliminate violence against women, a law that combines prevention of violence, criminalization of offenders and assistance for victims. Compared to other countries in the region, Tunisia is much advanced in terms of women’s rights. However, despite important progress towards gender equality since the independence of the country, much remains to be done.

One problem is the rise of conservatism. Abortion was legalized in 1973 and was a part of Bourguiba’s strategy, not only to promote women’s rights but also, to enhance family planning. This has led to an important decline in fertility and maternal mortality. Nowadays, more and more voices, within the medical profession, are being raised against the act, arguing that a child is “a gift of god” and “killing a fetus at whatever month of its growth is a crime.” This is both unfair and dangerous, as refusing abortion is not only denying a moral right of a woman to decide what to do with her body, but also it puts her life at risk as she might resort to illegal abortionists.

The battle for equality in inheritance is another challenge. The current interpretation of the Quran, based on the traditional idea that the man is the head of the family, entitles him to inherit twice what the woman gets. Bourguiba, though considered as a pioneer of women’s rights, was unwilling to take the risk of opposing conservatives both in Tunisia and in the Muslim world and take a step in that direction.

The Special Commission appointed by former President Caid Essebsi in 2017 was tasked with giving suggestions on how to promote individual freedom and equality. The report it published suggested, among other things, equal inheritance between men and women. Should the draft law pass in the Assembly of People’s Representatives (APR), it would set a precedent in the Islamic world and Tunisia would be the first Arab country to approve gender equality in inheritance.

However, opposition came this time, not only from conservative groups, but surprisingly from other secular parties, which for purely political reasons do not like to “offend” the traditional people’s beliefs. Some other secularists gave a lip service to the draft law without any concrete action to support it.

In formal politics, women have not yet shattered the glass ceiling. Although their participation has increased since 2011 thanks to considerable pressure from civil society, a pressure that led to the introduction of gender parity in electoral lists, only 16% of women are heading them in the coming elections. Besides, women are still excluded from most executive leadership. According to the Ministry of Women, Family and Children Affairs, women who occupy decision-making positions represent only 4%.

Equal pay is another hard-fought issue. According to the National Institute of Statistics, women are 25.4% less paid than men in the private sector and the unequal pay could reach -44.4% in the industrial sector.

Complicating things further, multinational manufacturing companies, encouraged since the 1970’s by government facilities and the removal of customs barriers have most of their workers women, who are usually deprived of permanent contracts and fear joining trade unions. Once these companies feel that the working climate becomes tense, they usually move to other countries where social and environmental standards are neglected.

The government seems to be aware of the gender gap and has established a plan to ensure 35% of women in the labor force by 2020, through providing facilities such as kindergarten and nurseries so as to provide women with more time for paid work and investment credits for young women to start their own businesses. In short, economic empowerment is a sine qua non condition to women empowerment.

“And therein lies the rub.” Without being economically disenfranchised, women have no incentive to get their rights and their economic independence is at stake. Female rate unemployment is almost the double that of men (22.5 to 12.4%), according to the World Bank, and it is higher, especially in southern and western underprivileged parts of the country. Worse still, the more educated she is, the less chance the woman has to get a job. That’s because most required jobs for young women (and youths in general) are low quality and do not require many skills.

How can we overcome this disparity between the Constitution that guarantees gender equality in all fields and the narrow political calculations of parties?

To my mind, a resilient and sharp Tunisian civil society has still a lot of work ahead. One should remember that for the last decades, it has proven to be effective and efficient in dealing with every human rights issue and one may dare say that even political parties would not have such substantial freedom today without the role that has been played by civil society.

Beyond the celebration of the giant steps taken by “state feminism” decades ago and beyond the general acknowledgement of the role played by women before, during and after the Tunisian uprising, especially in the drafting of the constitution, it is high time to take effective actions to full equality, including that of equal inheritance.

Messaoud Romdhani is a regular contributor to the Alternatives International Journal. He is a Tunisian human rights activist and member of Euromed Rights.