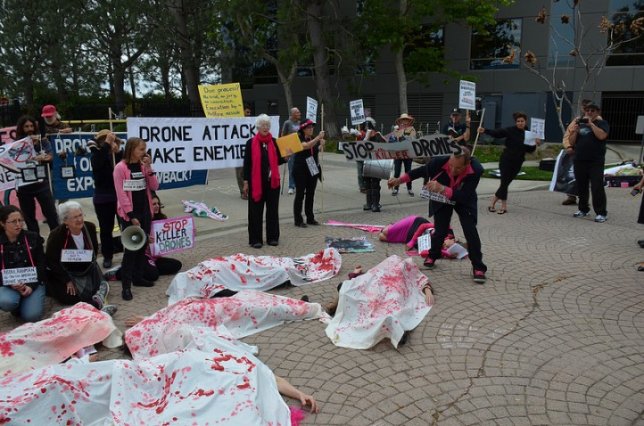 Drone Victims Come Out of the Shadows

New films, reports, and media coverage are finally giving the American public a taste of the personal tragedies involved in the U.S. drone war.

At each of the over 200 cities I’ve traveled to this past year with my book Drone Warfare: Killing by Remote Control, I ask the audience an easy question: Have they ever seen or heard from drone strike victims in the mainstream U.S. press? Not one hand has ever gone up. This is an obvious indication that the media has failed to do its job of humanizing the civilian casualties that accompany President Obama’s deadly drone program.

This has started to change, with new films, reports, and media coverage finally giving the American public a taste of the personal tragedies involved.

On October 29, the Rehman family—a father with his two children—came all the way from the Pakistani tribal territory of North Waziristan to the U.S. Capitol to tell the heart-wrenching story of the death of the children’s beloved 67-year-old grandmother. And while the briefing, organized by Congressman Alan Grayson, was only attended by four other congresspeople, it was packed with media.

Watching the beautiful 9-year-old Nabila relate how her grandmother was blown to bits while outside picking okra softened the hearts of even the most hardened DC politicos. From the congressmen to the translator to the media, tears flowed. Even the satirical journalist Dana Milbank, who normally pokes fun at everything and everyone in his Washington Post column, covered the family’s tragedy with genuine sympathy.

The visit by the Rehman family was timed for the release of the groundbreaking new documentary Unmanned: America’s Drone Wars by Robert Greenwald of Brave New Foundation. The emotion-packed film is filled with victims’ stories, including that of 16-year-old Tariq Aziz, a peace-loving, soccer-playing teenager obliterated three days after attending an anti-drone conference in Islamabad. Lawyers in the film pose the critical question: If Tariq was a threat, why didn’t they capture him at the meeting and give him the right to a fair trial? Another just released documentary is Wounds of Waziristan, a well-crafted, 20-minute piece by Pakistani filmmaker Madiha Tahir that explains how drone attacks rip apart communities and terrorize entire populations.

Just as the visit and the films have put real faces on drone victims, a plethora of new reports by prestigious institutions—five in total—have exposed new dimensions of the drone wars.

On October 22, Human Rights Watch issued a report on drone strikes in Yemen and Amnesty International issued another on drone strikes in Pakistan. While not calling for an end to all drone strikes, the reports detail cases of civilian casualties and criticize the U.S. government for considering itself above the rule of law and accountability. A third report, License to Kill, released by the Geneva-based group Al Karama, is much more damning of U.S. policy. While Amnesty and Human Rights Watch say drones are lawful under certain circumstances and mainly push for transparency, Al Karama asserts that the U.S. drone war is a clear violation of international law. It calls for an end to extrajudicial executions and targeted killings; complete reparations to victims; and a resolution by the UN Human Rights Council opposing the U.S. practice of extrajudicial executions.

Adding to these well-researched reports by non-governmental organizations are two documents commissioned by the United Nations. One is by Christof Heyns, the UN’s special rapporteur on extrajudicial, summary, or arbitrary executions. The other is by Ben Emmerson, the special rapporteur on human rights and counter-terrorism. Heyns warns that while drones may be more targeted than other weapons, they are easier to use and may “lower social barriers against the use of lethal force.” He said that a “drones only” approach risks ignoring peaceful approaches such as individual arrests and trial, negotiations and building alliances.

Emmerson said states have the obligation to capture terrorist suspects, when feasible, and should only use force as a last resort. He blasted the U.S. lack of transparency, calling it the single greatest obstacle to an evaluation of the civilian impact of drone strikes. He said states must be transparent about the acquisition and use of drones, the legal basis and criteria for targeting, and their impact. “National security does not justify keeping secret the statistical and methodological data about the use of drones,” he claimed.

But perhaps more impactful than the UN reports themselves was the debate they engendered on the floor of the UN General Assembly. On October 26, for the first time ever, representatives from a broad swath of nations waited their turn to denounce the U.S. drone policy. Venezuela called drones “flagrantly illegal” and said they were a form of “collective punishment.” Brazil pushed the UN rapporteurs to take an even stronger stand. China called drones a “blank space in international law” and insisted that nations “respect the principles of UN charters, the sovereignty of states, and the legitimate rights of the citizens of all countries.”

The representative of Pakistan tried to put to rest press reports that the Pakistani government secretly approved of the strikes. He stated that drones put all Pakistanis at risk and radicalize more people, and called for “an immediate cessation of drone strikes within the territorial boundaries of Pakistan.” This was the same sentiment expressed by Pakistani Prime Minister Nawaz Sharif in his October 23 meeting with President Obama.

The U.S. government is feeling the pressure. It has taken steps to reduce civilian casualties and has reduced the actual number of strikes, but certainly not eliminated them. In fact, there was a drone strike in Somalia on October 28 and another one in Pakistan on October 31 that killed Taliban leader Hakimullah Mahsoud, who was about to engage in peace talks with the Pakistan government.

While the reduction in the number of strikes is a partial victory, it cannot erase the hundreds of innocent lives lost over the years. Also, with the global proliferation of drones (thanks to the easing of restrictions on overseas sales and the introduction of domestic drones into U.S. skies by September 2015), their usage will inevitably increase. A mobilized global community is the only force that can serve as a restraining factor.

It is also best way to honor the Rehman family and other victims. As 13-year-old Zubair Rehman testified, “I hope that by telling you about my village and death of my grandmother, I can convince you that drones are not the answer. I hope I can return home to tell my community that Americans listened and are trying to help us solve the many problems we face. And maybe, just maybe, America may soon stop the drones.”

Responding to this call is the Global Drone Summit November 16-17 in Washington DC, where hundreds of people from around the world will gather to strategize and to organize a global network. They will also announce campaigns to pressure the U.S. government to release the legal memos justifying drone strikes, and create a compensation fund for civilian victims. Check here to register for the summit or watch the live stream.

Medea Benjamin is cofounder of CODEPINK and the human rights organization Global Exchange. She is the author of Drone Warfare: Killing by Remote Control.