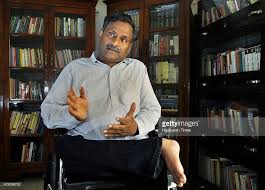 Concern for Life of a Disabled Political Prisoner

G.N. Saibaba, Professor of English at Delhi University and convener of an open organisation called Revolutionary Democratic Front, was arrested from the Indian capital, Delhi, on 9 May 2014 and imprisoned in a jail in the western Indian state of Maharashtra. Although he is 90 per cent physically handicapped, the state opposed his bail repeatedly claiming he would pose a grave danger to its security. He got a “temporary bail” from the Bombay High Court on 30 June 2015 on health grounds but had to surrender in December and was sent back to jail. The Supreme Court of India gave him an unconditional bail in April 2016. But his trial continued and finally, he was convicted under the Unlawful Activities (Prevention) Act and sentenced to life imprisonment by a court in Maharashtra’s Gadchiroli. His co-accused, student activist Hem Mishta, journalist Prashant Rahi and tribal activists Mahesh Tirke and Pandu Narote also received life sentences. Another tribal activist, Vijay Tirke, got a 10-year imprisonment. All of them were accused of being Maoists.

G.N. Saibaba is disabled from the waist down from an attack of polio which he had suffered early in life. He cannot move without a wheelchair. But it was not provided to him in jail for several months. He was kept in an “anda” (egg-shaped) cell isolated from other prisoners. Later, seeing his suffering, some of the prisoners tried to attend to his needs as far as possible. But the prolonged incarceration without proper medical care made him the target of a number of ailments. He now has diseases in his heart, kidneys and gall bladder. Worse still, he can hardly move his left hand, which was all right before he went to jail.

In a letter to his wife Vasantha Kumari dated 17 October received on 25 October 2017, Saibaba writes:

"I am frightened to think of coming winter. Already I am shivering with continuous fever. I do not have a blanket. I do not have a sweater/jacket. As temperature goes down excruciating pain continuously in my legs and left hand increases. It is impossible for me to survive here during the winter that starts from November. I am living here like an animal taking its last breaths. Somehow 8 months I managed to survive. But I am not going to survive in the coming winter. I am sure. It is of no use to write about my health any longer."

We are deeply concerned about the life of G.N. Saibaba and call upon you to appeal for his release so that he can receive the much needed medical attention and facilities that a disabled person like him deserves. We also urge you to demand the release of all his co-accused, who, even if we accept the charges brought by the prosecution, have committed no crime other than believing in an ideology.

Please mail your appeals to: