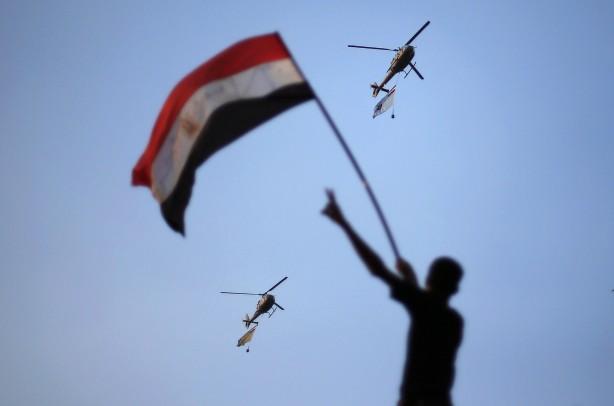 Celebrations and Dangers for Egypt’s Revolutions

There are similarities. Like in 2011, the military’s move against the sitting president was calculated as a response to massive popular protests—the military then and now claim to be operating on behalf of the Egyptian people. In 2011 people in Tahrir Square reached out with flowers to soldiers climbing down from their tanks. Yesterday the throngs crowding Tahrir Square cheered the military helicopters flying over the square.

But there are serious differences, and major dangers. This time, the sitting president was not a U.S.-backed military dictator kept in power by U.S. funding and political support. This time, the deposed president was Egypt’s first democratically and popularly elected president in several generations. This time, when the military deployed armored personnel carriers in the streets of certain neighbourhoods of Cairo, it was only, apparently, in areas known as strongholds of former President Morsi and the Muslim Brotherhood-based party he represents.

Whether or not the military’s removal of the president constitutes a coup, the removal of a president by force, by the military, doesn’t bode well for Egypt’s fragile, incomplete and already flawed democracy. Where has that ever succeeded? For people’s movements, the take-over by the military of implementation of the street’s demand that Morsi must go, doesn’t bode well for the future of that movement. The situation remains fraught.

Certainly the military did some things right. The announcement by General al-Sisi, the army commander, of the military’s "roadmap" for the post-Morsi period, was quickly followed by statements of agreement and support for the military by a broadly representative group of leaders of key Egyptian constituencies.

They included the head of the Coptic (Christian) church in Egypt; the imam of Al-Ahzar, the thousand-year-old institution known as the centre of Islamic thought in Egypt; Mohamed el-Baradei, the leader of one of the largest opposition movements and former head of the UN’s International Atomic Energy Agency; and crucially, a spokesperson for the youth-led tamarrud, or Rebel, movement that had initiated the call for these recent days’ protests.

Even the al-Nour party, rooted in Egypt’s most extreme Salafi movements, which had been Morsi’s key coalition partner, participated in the parade of voices heralding the new military-led post-Morsi order.

General al-Sisi called for a technocratic cabinet to be formed, to govern the country and to review the constitution, which he suspended. He said there would be a new election law drafted for parliamentary elections, and that an"ethical charter" would be drafted to guarantee freedom of expression and free media.

And he said that all measures would be taken "to empower the youth to take part in state institutions and to be key players in the process." The general claimed that the military does not want to play a political role or to rule Egypt—and on some level that’s probably true. But of course the military said that last time too, and yet continued to rule (quite brutally, by all accounts) for more than another year until President Morsi managed to send them back to their barracks.

He said that the military was responding to the Egyptian people’s "call for help," and that he did not intend to hold on to the reins of power but to "make good the demands of the revolution." The roadmap included anointing the chief justice of the Supreme Constitutional Court as interim president, with the power to rule by decree. But the Constitutional Court is hardly an independent institution, let alone one representing the revolutionary process that began in Tahrir Square in 2011.

Every judge in that court was appointed by the Mubarak regime; Adly Mansour, the chief judge and now interim president, has been on the court since 1992, and while he was chosen chief justice only a couple of months ago, he remains a hold-over from the Mubarak dictatorship—hardly a representative of "the revolution."

President Morsi had made huge mistakes. Not only did he fail (as almost any new president taking power after decades of dictatorship and entrenched neoliberal economic catastrophe would have failed) to improve the lives of ordinary Egyptians with jobs, electricity, water, security, etc., but Morsi and the Muslim Brotherhood that backed his party moved to strengthen the Brotherhood’s power and influence across Egyptian politics.

Moves away from women’s rights and towards more conservative Islamist-oriented rules began to emerge. He consolidated his own power, rewriting key constitutional provisions while the Mubarak-era judges undermined the elected parliament. The democracy—the real democracy, not simply the election—fought for in Tahrir Square remained largely out of reach of the citizens of Egypt.

So the breadth of the anti-Morsi protests was understandable, and the mobilisation of recent months incredibly impressive. The Tamarrud movement, led by an informal group of young activists, captured the increasing anger with an unprecedented petition campaign calling for Morsi to step down—exaggerated or not, the iconic claim is that they achieved 22 million signatures.

But what happens now? The military is once again the centre of power in Egypt. Armoured personnel carriers are once again visible on the streets. Morsi’s whereabouts are unknown, although he is rumoured to be in the Cairo headquarters of the Republican Guards—whether he is free to leave is unclear. There are reports of 300 warrants having been issued for the arrest of Muslim Brotherhood activists.

What will happen if the supporters of former President Morsi, supporters of the Muslim Brotherhood and its political party, remain in the streets? The pro-Morsi demonstrations were way smaller than those calling for his ouster; but there are still hundreds of thousands in the squares.

The students at Cairo University, known as a pro-Morsi stronghold, are outraged at the APCs surrounding their campus. The threat of violence remains sky-high. At the main pro-morsi mobilisation site in Cairo’s Nasr City, Morsi managed to get a message to the crowd via a scratchy cell phone.

The song that followed his cri du coeur that he would never step down, was a well-known Egyptian militant song whose refrain says something like "keep your weapons close." Egypt remains as polarised as perhaps any country but Syria in the entire region—the threat of civil war is not out of the question.

And beyond the threat of violence in the streets, having the military in control means that U.S. influence is much greater—because the Egyptian military is thoroughly dependent on the U.S. for economic support and access to weapons. After the overthrow of Mubarak, the U.S. promised around a billion dollars in economic and development aid for the"new Egypt."

But less than a quarter of that has actually been sent. On the other hand, the $1.3bn the Egyptian military receives in U.S. tax dollars every year has continued to flow in full and on time. (It’s not clear whether military aid to Egypt even faced any sequester-based reduction, since the Pentagon has a lot more flexibility in its accounts than domestic programs do.)

Eighty percent of all Egyptian arms purchases are enabled by U.S. tax dollars, and the U.S. (along with the UK on a much smaller scale) continues to provide training for the Egyptian officer corps. However they choose to use it, the Obama administration and the Pentagon hold enormous potential capacity to influence the military’s trajectory. And that too bodes badly for the Egyptian people’s ability to realise the goals of what they still call their revolution.

It remains unclear what the impact of Morsi’s overthrow will be in the region. Certainly Morsi’s recent move towards a stronger level of support for the Syrian rebel opposition, and parallel consolidation of his government’s ties with Saudi Arabia, Turkey, and Qatar in the context of the regionalisation of the Syrian civil war, fuelled his opponents’ anger. He was perceived as pulling Egypt further into not only a regional war, but a sectarian one as well, and Christian, secular and even many Muslim Egyptians were not happy. What role, if any, the military and the military-backed interim government will play in Syria remains unclear.

For those of us in the U.S., the most important point should be to stop greater U.S. intervention in Egypt. As it did in 2011, the Obama administration is vacillating on its Egypt position. As the Washington Post described it:

"Just two weeks ago, the U.S. ambassador in Cairo said Washington supported the Muslim Brotherhood-led government and felt it would be unwise for Egyptians to think ‘street action will produce better results than elections’… After voicing support for Morsi, the Obama administration appeared to distance itself from him this week. Hours before Egypt’s generals announced that they were appointing a temporary government to replace Mohamed Morsi, however, U.S. officials signalled that they understood and shared the concerns that sparked a rebellion against the Islamist leader."

Part of the reason U.S. officials will likely resist identifying the military’s action as a coup, is that officially, if not always in practice, coups have consequences in U.S. foreign policy. U.S. law prohibits sending aid to a government which comes to power by removing an elected government by force. We can expect to hear a lot of synonyms, and not too many overt uses of the word "coup."

For the moment, U.S. military aid will probably continue to flow—the Chairman of the Joint Chiefs of Staff implied that it would be how the military runs things, not the act of removing an elected leader that will determine Washington’s position. "At the end of the day it’s their country and they will find their way," General Dempsey said, "but there will consequences if it is badly handled."

For now, our main hope should be for a tamping down of the violence, and a rapid end to military governance. Egyptian society had been divided almost down the middle between supporters and opponents of Morsi, although the recent protests may well indicate that even many of his supporters, disillusioned, have moved to the other side.