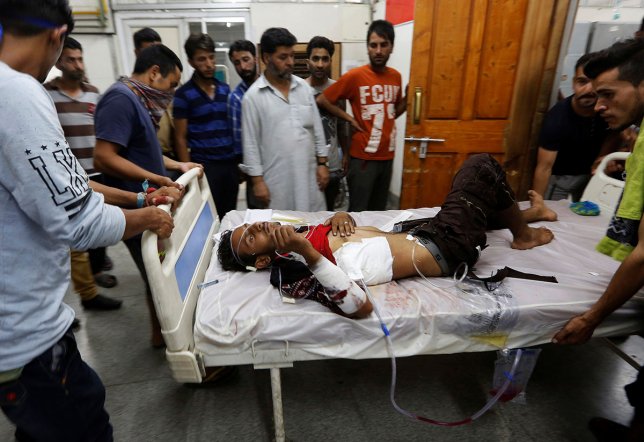 Bangkok-Dhaka-Geneva-Madurai-Paris-Quezon City, 26 October 2016 – The High Court in Jammu and Kashmir has again prolonged the arbitrary detention of Kashmiri human rights defender Mr. Khurram Parvez, who has already spent 40 days in jail. Our organisations call on the Indian authorities to release him immediately.

On 25 October 2016, the Jammu and Kashmir High Court heard the case against Mr. Parvez filed under the Public Safety Act. Mr. Parvez’s family had filed a petition on 13 October 2016 challenging his detention, to which the State failed to respond. However, instead of releasing Mr. Parvez, the High Court granted the State another three weeks to respond, sending Mr. Parvez back to Jammu’s Kot Balwal Jail, 300 kilometres away from his home, family, and legal counsel in Srinagar. The Court has set the next hearing date for 14 November, meaning that Mr. Parvez risks spending at least 20 more days in arbitrary detention.

On 14 September 2016 Mr. Parvez was stopped from travelling to Geneva to participate in the United Nations Human Rights Council on orders from the Intelligence Bureau, and was arrested 2 days later at his home in Kashmir under Sections 107 and 151 of the Criminal Procedure Code[1] and denied access to legal counsel.[2]

A judge from The High Court in Srinagar Districtissued an order for Mr. Parvez’s release on 20 September, but police promptly re-arrested him under the preventive detention provisions of the Public Safety Act (PSA). He has remained arbitrarily detained since, along with hundreds of others individuals detained under the ambiguous and oft-manipulated PSA.

Our organisations denounce this abuse of the PSA by the Indian authorities to silence human rights defenders and dissidents under the guise of national security. Almost 800 people have been arrested in central Kashmir since protests broke out in July 2016, with at least 80 of them booked under the PSA.

On 19 October 2016, several United Nations experts called on the Government of India to release Mr. Parvez, and expressed their concerns regarding the arbitrary application of the PSA against human rights defenders.[3] Nevertheless, the Indian authorities have ignored this call and their obligations under international law by continuing to hold Mr. Parvez in arbitrary detention.

Our organisations condemn the arbitrary use of the Public Safety Act to unlawfully detain Mr. Parvez and call for his immediate and unconditional release. Additionally, we demand an end to the harassment of human rights defenders and that the Indian government remove all legal and administrative barriers that impede their legitimate work. We also call on the international community, notably the other members of the United Nations Human Rights Council of which India is currently a member, to insist that India comply with its human rights obligations, including by allowing Indian human rights defenders to freely engage in their work and to enjoy their rights to free expression, peaceful assembly, and association.

The Observatory for the Protection of Human Rights Defenders (The Observatory) was created in 1997 by FIDH and OMCT. The objective of this programme is to intervene to prevent or remedy situations of repression against human rights defenders. FIDH and OMCT are both members of ProtectDefenders.eu, the European Union Human Rights Defenders Mechanism implemented by international civil society.

The Asian Federation Against Involuntary Disappearances (AFAD)is a federation of human rights organizations working directly on the issue of involuntary disappearances in Asia. Envisioning a world without desaparecidos, AFAD was founded on June 4, 1998 in Manila, Philippines.

The Asian Human Rights Commission (AHRC) works towards the radical rethinking and fundamental redesigning of justice institutions in order to protect and promote human rights in Asia. Established in 1984, the Hong Kong based organisation is a Laureate of the Right Livelihood Award 2014.

FORUM-ASIAis a regional human rights group with 58 member organisations in 19 countries across Asia. FORUM-ASIA addresses key areas of human rights violations in the region, including freedoms of expression, assembly and association, human rights defenders, and democratisation. FORUM-ASIA operates through its offices in Bangkok, Jakarta, Geneva and Kathmandu.

The International Coalition Against Enforced Disappearances (ICAED)is a network of 42 member organisations concerned with the issue of human rights and the struggle against enforced disappearances. The principal objective of ICAED is maximising impact of the activities carried out by its members in favour of an early ratification and effective implementation of the Convention for the Protection of all Persons from Enforced Disappearances.

Odhikar, a human rights organisation based in Dhaka, Bangladesh, was founded in 1994 with the aim to create a wider monitoring and awareness raising system on the abuse of civil and political rights.

[1] Section 107 and 151 of the Criminal Procedure Code allow the police to exercise preventive custody of individuals only when there is an imminent danger to the peace or likelihood of breach of peace in a given area. Such arrests can be made only when it appears to the concerned police officer that the commission of such crimes cannot be prevented otherwise. [2] For more information on Mr. Parvez’s arrest see https://www.fidh.org/en/issues/human-rights-defenders/kashmiri-human-rights-defender-khurram-parvez-arbitrarily-arrested [3] OHCHR, http://www.ohchr.org/EN/NewsEvents/Pages/DisplayNews.aspx?NewsID=20697&LangID=E