Accueil > English > AI and the WSF > Assembly of Social Movements on Climate Change Kicks Off With a Bang (...) 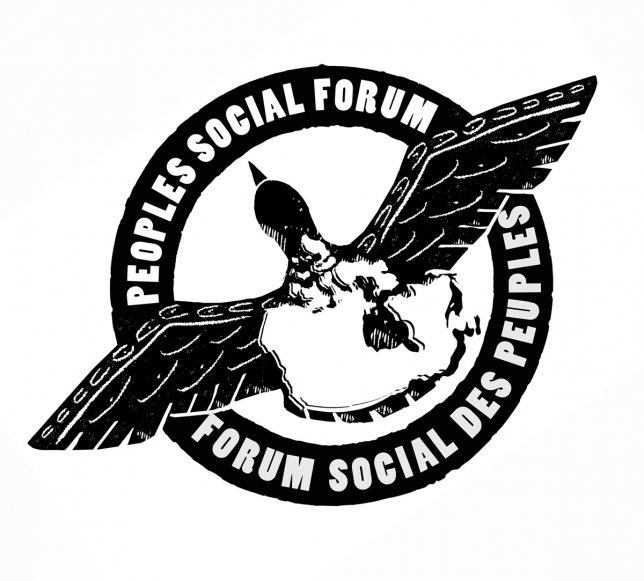 Assembly of Social Movements on Climate Change Kicks Off With a Bang !

More than sixty people were in Montreal on June 6th for the first ever Assembly of Social Movements on Climate Change, under the umbrella of the Peoples’ Social Forum, taking place in August 2014. This preparatory meeting of the larger Assembly to take place on August 23rd gathered representatives from environmental groups, citizen movements, First Nations communities, as well as labour union representatives, women’s groups and student associations, giving credence to the notion that the climate change issue is crossing over into seemingly dissociated sectors. British Columbia, Alberta, Ontario, Quebec and eight Native communities and groups were represented.

The meeting was held in cooperation with the passing of the Peoples’ Walk for Mother Earth in Montreal, a 700-km journey from Cacouna to Kanesatake aiming to raise awareness among local communities who will be affected by both the Line 9 and Energy East pipeline projects.

An unprecedented willingness to work together

The call was initially made by Alternatives and the Council of Canadians, and successfully mobilized over fifteen groups just for the organization of the June 6 meeting. Respecting the autonomy and specific agendas of each other, the participants appreciated the opportunity and the urgency of working together in solidarity, complimenting each others work to obtain significant achievements against the pro-hydrocarbon and anti-climate policies of the present federal government. This initial meeting held discussions to build consensus at three levels.

The Assembly wishes to achieve more together than as a sum of all its parts. Activist art, direct action and civil disobedience are the main tactics that were agreed upon, along with disinvestment campaigns, training camps and common declarations

The Assembly of Social Movements on Climate Change, unlike the extractive industry, aims to be a sustainable and a lasting process ! Its structure will be inclusive, horizontal and participative, based on the Peoples’ Social Forum Charter in order to debate and put forth common plans of action.

At the Peoples’ Social Forum, and beyond

More than 10 000 people are expected to attend the Peoples’ Social Forum in Ottawa from August 21st to 24th 2014. It will be a historic event : the very first time that many activists and progressives from French and English Canada as well as First Nations will come together to discuss the future we want to work towards. The issue of how we protect our environment will be of fundamental importance.

The Assembly of Social Movements wishes to halt climate change. Regardless of who will govern the country as of 2015, we know that the policies and actions of our government and the oil industry are responsible for the current situation, and the Parliamentary opposition offers far too few significant alternatives and changes. By joining forces from across the Canadian territory, including environmental and First Nations groups, citizens’ movements, youth, scientists, workers, students and more, the Assembly wishes to leverage social justice movements through the climate change issue, giving new breath to current and historic struggles of civil society in favour of climate and social justice.

Michel Lambert is the Executive Director of Alternatives