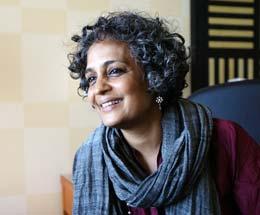 Indian political activist Arundhati Roy was recently in Vancouver for a speaking engagement. The acclaimed author, who won the 1998 Man Booker Prize for fiction with her inaugural novel The God of Small Things, has spent the last 15+ years investing her energy into a number of human rights and environmental causes across the subcontinent.

South Asian Post editor Jagdeesh Mann caught up with Roy for a discussion about India’s increasing corporatization, it’s upcoming election, and the author’s perception of the trajectory of her infamously coined ‘love laws’.

Jagdeesh Mann: Welcome to Vancouver. Since the publication of ‘The God of Small Things’, your critique of capitalism has been sharp and consistent. Do you feel the economic liberalization of India’s economy has brought any positive changes to that country?

Arundhati Roy: Obviously, there’s nothing that’s completely black and completely white. Underneath the bleakness of what it has wrought in the environment, in the economy, in the violence, in the militarization, obviously, there are positive things. Yet those positive things come at too high a price. While this massive rush for infrastructure development and so on displaces hundreds of thousands of people, perhaps the people who pay the greatest price for it are women. Women, as a result, are at the forefront of resistance movements. As a result of being at the forefront of those movements, something changes in their lives. Is that a positive thing or not? I can’t say. Ultimately, you have to respect what they are resisting. If you were to come to India now, the energy that is being a new thing that is happening and that too is faced with a lot of violence is the new young, urban Indian woman, who’s in some ways been freed, but in some ways been violated because that freedom is seen as such a threat from traditional society. Let it be said that all this is happening in a climate where 100 people own 25 percent of the GDP, 800 million people are living on 20 rupees a day, and rivers, mountains, and forests are disappearing.

Jagdeesh: Economic wealth distribution is a very important issue, including here in North America. I saw a statistic that in the United States, there are 400 individuals who own 50 percent of all wealth. Do you feel that that is the single most important economic issue facing whether it be India or other world economies?

Arundhati: In India, the most important issue is that the privatization of everything has created a situation in which you have a few corporations who have this cross ownership of businesses. You have corporations like Reliance or Tata. It’s not just that they’re big mining mafias or that they’re big automobile people. They own automobile businesses. They own petrochemical. They own textile. They own hospitals. They own water distribution, power distribution. They run educational institutions. They sell vegetables. They manufacture salt. In a way, they can shut the country down whenever they want. Then they run the media, and now the media runs the government. That is a very, extremely dangerous situation. Whether you’re a capitalist, a communist, a socialist, a farmer, or a student, you have to believe that this kind of conflict of interest can only run us aground.

Jagdeesh: There are parallels again here in North America to the point you illustrate. Reliance, Tata, and others sprawl far beyond India’s borders, no different than how Shell and IBM sprawl far beyond our own. Given the dominance of the multinational corporation, to what extent are traditional governments even relevant?

Arundhati: The point is that increasingly, they are the government. These corporations are the government. They, in places, are even running the police and running the courts. They have hollowed out every institution. They can buy out anything. The elections that are happening now are really being run by the corporations. I suppose what happens is that the economy in the whole world is becoming globalized, but the coercive powers of controlling people remain localized within the borders. As I’m saying, in order to push through these policies that are friendly to the corporations, that can only be done if the state becomes more and more militarized. For example, whether it’s BJP, Congress, or whoever is in power, they are talking about a situation in which 70 percent of India lives in cities, which would mean social engineering of a scale which no one’s ever seen, where you have some 500 million people being moved. How do you do that unless you find excuses to militarize more and more and more and more, which is what is happening there?

Jagdeesh: It sounds like history repeating itself with the enclosure movement of common pasture lands as took place in England’s own industrial revolution.

Arundhati: This is the taking over of the commons. But in this era, it’s even more. There’s a sort of digitizing of the commons, where everybody is being reduced to a unique identity card. Then you can be controlled in ways. The point is that the scale of operation in India is so huge: 500 million people. What it going to happened? Of course, all of it is underpinned by the idea of caste, which is alien to other societies, but we have it.

Jagdeesh: You recently wrote an introduction to a book about Dr. Ambedkar. In it, you refer to Mahatma Gandhi and his shortcomings concerning caste. I know it’s very difficult, in your country in particular, to criticize him because he’s so deified. What was your critique?

Jagdeesh: Recently, you have also been critical of Anna Hazare’s movement, because you feel it’s was co opted by corporate powers behind the scenes. To what extent do you feel there was a parallel in Gandhi’s own activities?

Arundhati: Anna Hazare is just a pawn. He’s not worth even thinking too much about. He just really made a fool of himself. He calls himself a Gandhian, but then has many of the same prejudices that Gandhi had. Gandhi was a phenomenon, and he continues to be thought of as one. It’s not just about the Birlas backing him. Of course, they backed him, from the time he came back from South Africa, right up to the very end. It’s just the cunningness with which he played the political game. At the turn of the century, between the 19th and 20th century, the idea of empire, where you could ride into Delhi and take the throne, turned into the idea of the nation. Then came the idea of representation. Then came the questions of who represents who, and how does the Congress, which is also the upper caste, claim to represent the Muslims or the Dalits, who are then called "untouchables?" Gandhi just tried to hold this all together, and it just blew apart. He tried to thwart Ambedkar all the time. Ambedkar’s point was simply that the untouchables, who have been repressed, despised, shunned for thousands of years, must now develop into a political community, with its own representatives. Gandhi just couldn’t abide that idea. He just wanted them to remain like servants in the big house.

Arundhati: I don’t want to blame Gandhi for everything, but certainly it is there in his idea of coming back to India and holding aloft the Bhagavad Gita for the believing Hindus, and doing this missionary work among who he called the "Harijan," the people of God, who were the Dalits. That term infantilizes them to some extent, by calling them "Children of God."

Fusing religion into politics, and declaring that he was a Hindu, and yet represented Muslims, as well as the untouchables… it was all hubris of a kind. All sold as some kind of holy man’s sacrifice.

Jagdeesh: This fusion of religion and politics in India, do you believe this has had an influence in the way the ‘love laws’ of that country have been played out – the term "love laws" alluding to the reference you made in your book The God of Small Things?

Arundhati: Those are ancient. When I wrote about the "love laws," I was talking about the caste system, which is thousands of years old. It precedes democratic politics. It precedes the fusion of religion and politics, and all of that. In ‘The Doctor and the Saint’, I show that caste has just been entrenched and modernized by corporate capital and by democracy.

That’s true, but look at the caste that control things. Who runs the bureaucracy? Who runs the judiciary? Who teaches in the universities? Who are the journalists? Who runs the media? Who runs the corporations? You’ll see the caste system playing out as it was set out in the way that was.

Jagdeesh: Your critique of capitalism has been acute, and also the corporatization of everything, from literary festivals to politics and ‘grassroots movements’. What are one or two things you feel that must happen, in order for real change to occur?

Arundhati: You create a structure, in which the media can function, where it cannot be entirely owned by corporations. It has to declare its interests, and everybody has to know what’s going on. That will be one really major step.

These things aren’t going to happen without war, without resistance and all that. The battles that are being fought by people are really profound ones, now. This kind of ravaging of the environment, by giving away whole rivers, whole mountains, whole forests to corporations must stop.

All this secrecy must stop. You find that the World Bank and IMF, their projects of transparency come with their own interests, which is to allow direct access of international capital to the grass roots. They have their own agenda for rule of law, provided they are making the laws. Transparency is crucial so that the world becomes a level playing field for international capital. These are, I think, the big things.