Accueil > English > NEWS AND ANALYSIS > Alternatives does not support the idea of holding a WSF 2015 in (...) 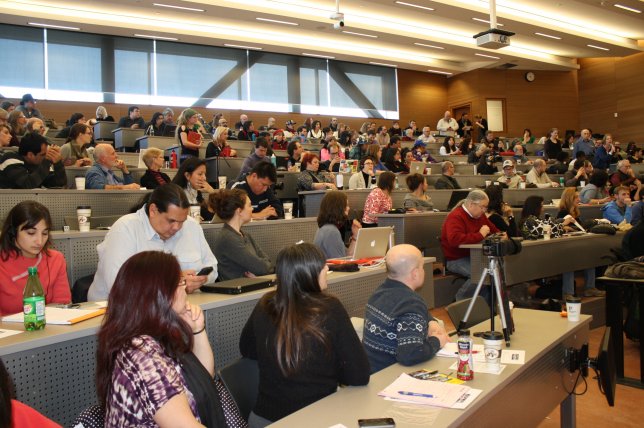 At its last meeting in October 2013, the Board of Alternatives, after a debate that allowed all views to be expressed, agreed, unequivocally, not to support the draft World Social Forum (WSF) in Montreal in 2015. While expressing support for the idea of eventually holding a WSF in Montreal, the Board considers it essential to build a prior consensus within social movements and civil society organizations here before submitting such a project at the International Council of the World Social Forum.

Alternatives and many other organizations including labour unions have been engaged since the past two years to achieve such a consensus on holding a People’s Social Forum which is now scheduled for August 21 to 24, 2014. The organization has committed a lot of energy to create the conditions for its success through a democratic process with technical, financial and organizational inputs. This commitment is made, inter alia, through the establishment of the first expansion commission in Montreal, Ottawa, Toronto, Vancouver and participation in various coalitions across Canada. These discussions helped to build a consensus within the Quebec caucus. On 19 and 20 October, a meeting of indigenous caucus confirmed their “historical support” (these are their words) to work with the project of Peoples Social Forum. Meetings are being held this week in Calgary and Vancouver. Others are in the pipeline.

It will be recalled that in 2011, after an unsuccessful exploration to advance the idea of holding the 2013 World Social Forum in Montreal, the opinion and perspectives of a number of organizations in Quebec were considered and the importance of holding the first ever Canada/Quebec/First Nations was promoted. This is the project that is currently being developed as the Peoples Social Forum (PSF).

The democratic process of PSF has matured to the point where two general assemblies of a large number of organizations have been held. One was the founding assembly held in January this year in Ottawa and the other was held in July in Edmonton where we elaborated on establishment of organizational structures and functioning. In addition to commissions for regional expansion, caucuses (indigenous, labor, people of color and soon women) were created and played leading roles in this process.

The reality of this project is an important constraint to the holding of a successful WSF in 2015 in Montreal given the proximity of dates and particularly in terms of finances.

Build a united movement for the PSF 2014

The board called upon activists who want to hold a World Social Forum in Montreal, to ensure the success of the People’s Social Forum 2014 in order to create the necessary conditions for a credible WSF thereafter with the support of all social movements in Quebec, First Nations and Canada. The Board calls on all organizations to make PSF 2014 a real political success.