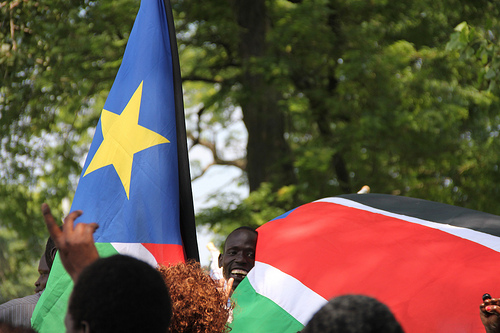 After Years of Struggle, South Sudan Becomes a New Nation

JUBA, South Sudan — The celebrations erupted at midnight. Thousands of revelers poured into Juba’s steamy streets in the predawn hours on Saturday, hoisting enormous flags, singing, dancing and leaping on the back of cars. “Freedom!” they screamed. A new nation was being born in what used to be a forlorn, war-racked patch of Africa, and to many it seemed nothing short of miraculous.

After more than five decades of an underdog, guerrilla struggle and two million lives lost, the Republic of South Sudan, Africa’s 54th state, was about to declare its independence in front of a who’s who of Africa, including the president of the country letting it go: Omar Hassan al-Bashir of Sudan, a war-crimes suspect.

Many of those who turned out to celebrate, overcome with emotion, spoke of their fathers, mothers, sons and daughters killed in the long struggle to break free from the Arab-dominated north.