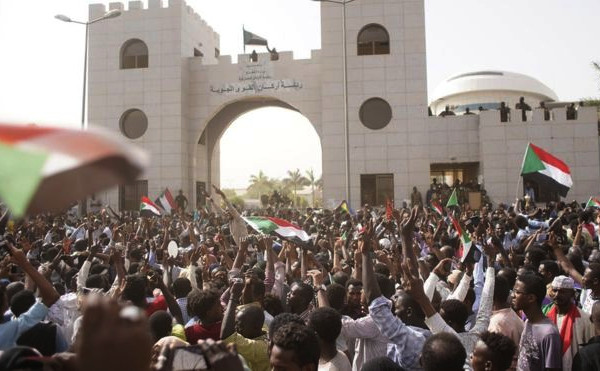 A First Victory for the Sudanese Revolution

Will the People be Able to Override the “Orderly Transition”?

Omar al Bashir, the 30-year long dictator of Sudan, the perpetrator of the massacre of hundreds of thousands of civilians in the Darfour and South Sudan wars, the enemy of the working class and the poor of Sudan, the ally of the Muslim Brothers (the Ihwan), the collaborator of Recep Tayyip Erdogan and the AKP of Turkey, has been ousted. This is a result of the power and resilience displayed by the popular movement, the revolutionary struggle that has lasted for four and a half months. Blessings to the peoples of the Middle East and Africa! We owe a debt of gratitude to the people of Sudan for having demonstrated once again that despots are not stronger than a people in action. Our hearts beat for the success of the Sudanese revolution.

This is the most important aspect of what occurred in Sudan on 11th April 2019. The revolutionary people of this Arab country bordering sub-Saharan Africa has been fighting for months to bring down Omar al Bashir, the National Congress Party, his instrument for power, and the whole governmental system that supported him with immense sacrifices, chanting “Taskut bas!” (“Just fall, that is all!”). Game over! Mission accomplished! Or nearly. Whatever complications are in store for the future, this is a victory for the revolution. Even the military coup has been successful thanks to the power of the people.

The people marched to the headquarters of the General Staff in Khartoum on Saturday, 6th April, a demonstration carefully planned for weeks. Since then, there has been a sit-in in front of the headquarters of the armed forces bringing together hundreds of thousands of people. There has also been supporting action in the other states of the country.

It is this impressive revolutionary resolution that has made it imperative for the ruling classes of Sudan and for imperialism to dispense with the dictator. This we must never forget.

From Rebellion into a Revolution

At RedMed we tried to follow the Sudanese revolution carefully from day one (See for instance “2018: year of the resurgence of the third wave of world revolution”). When Omar al Bashir declared a state of emergency at the end of February in order to stop the tide of the popular uprising that had already lasted two full months, we wrote that this was one of the final moves of the counter-revolution in the face of the transformation of the people’s rebellion into a revolution. But we added that the counter-revolution had its spare instruments. We pointed out that the most probable scenario was recourse to an “orderly transition,” which was the most common instrument used in the Arab revolutions of 2011-2013 (most conspicuously in Egypt and Yemen) with the intervention of the United States. We stressed that there could be different scenarios in the case of an intervention by the armed forces, among which the most reactionary would be a coup d’état by Salah Abdallah Gosh, head of the powerful National Intelligence and Security Service (NISS) and a man of confidence for U.S. imperialism as well as for Egypt and Saudi Arabia.

Now, Awad Mohamed Ahmed Ibn Auf, First Vice-President and Defence Minister of al Bashir has declared that power has been taken over by a military council, that Omar al Bashir himself has been put under house arrest along with certain of his ministers, of high-level officials of the National Congress Party, and of certain high-ranking members of the Ihwan, that the constitution has been suspended and a state of emergency has been declared for three months, that the military council will govern the country for a period of two years. It is evident that these decisions have been made so as to implement the strategy of “orderly transition” through a “palace coup.” But no one knows what will happen next. No one should conclude, “a coup d’état has taken place in Sudan and there is nothing more to expect.”

It should not be forgotten that when Hosni Mubarak was brought down in Egypt on 11th February 2011, the administration of the country was taken over by a certain Supreme Military Council. For the next two years the Egyptian revolution stormed through the Middle East at the head of a number of revolutions in the Arab world!

Let us reiterate that no one may be certain where the present orderly transition will take Sudan. Let us rapidly go through some of the most probable scenarios:

The Egypt 2011 scenario: This is the most probable scenario. The revolution continues. This time the people turn their anger toward the Military Council. What will be decisive, among many other factors, is how the people organize, the strategy of the leadership, whether the working class will follow an independent line and thus assume the hegemonic direction of the revolutionary classes and strata. The dynamics of the Sudanese revolution are very strong. What made it possible for hundreds of thousands of people to camp in front of the headquarters of the army for five days and nights was the fact that certain groups of officers, non-commissioned officers and soldiers joined the crowds and protected them with volleys against the attacks of the NISS and the police. This shows that a tremendous revolutionary fervour has seized Sudanese society at large. Unfortunately, however, not much is to be expected from the existing leaderships. The Sudanese Professional Associations should be congratulated for having undertaken the leadership of the movement with audacity and resolution. But to the extent that their transition formula is a “technocratic government,” the possibility that they may collaborate with the more progressive wing of the military and thus extinguish the fire of the revolution is very real. As for working class leadership, the powerful Communist Party of Sudan, limiting itself to a programme of “national democratic revolution” will, in all probability, tail-end the petty-bourgeoisie. Nonetheless, as long as the revolution continues, it is possible that it should throw up new political forces from its bosom. The fundamental tasks of Sudanese Marxists will be to organize within the working class through trade unions and to penetrate within the rank and file soldiers.

The Egypt 1952 scenario: There have been news leaks regarding diverse juntas engaging in a power fight within the process that brought down Bashir. No one can rule out the possibility that a more radical group of officers take over from Awad Mohamed Ahmed ?bn Auf, who seems to be firmly in control for the moment. This may lead to a situation similar to the Egyptian revolution of 1952-54, where ultimately Gamal Nassertook power. We cannot dwell for long on this prospect without a grasp of the inner divisions within the Sudanese armed forces. If this happens, Sudanese Marxists need to take into consideration the dynamics of permanent revolution born in the Portuguese revolution of 1974, fighting for the political independence of the working class and trying to organize rank and file committees among the radicalized soldiers and officers. This scenario is the one with the lowest probability.

The Egypt 2013 scenario: It is a well-known fact that even if large masses take a revolutionary path, the likelihood of losing the struggle is high unless the leadership of the movement rises to the tasks of the historic moment. In the wake of a mobilization in Egypt at the end of June 2013, 30 million people in defiance of the Ihwan government that was laying the basis for a despotic form of government, a Bonapartist move by Abdelfettah al Sisi, the Chief of the Army Staff, in a context of stalemate between the two camps of the masses and Ihwan gained him power and brought the victory of the counter-revolution (see our “Bonapartist coup in Egypt!”). We have stressed the powerful nature of the dynamics of the Sudanese revolution. But the Egyptian revolution itself relied on one of the strongest social movements in modern history. The absence of a well-organized leadership brought defeat. This may happen immediately in Sudan. In particular, let us remember that Salah Abdallah Gosh, head of the powerful and redoubtable NISS, was, in all probability, among the four heads of the Sudan security forces who visited Omar al Bashir in the small hours of the morning of 11th April to inform him that he had come to the end of the road. Should Gosh be able to grab the reins, and now that al Bashir is gone he is probably the strongest man in Sudan, that will mean that counter-revolution has gained. There is only one road to take for Sudan’s Marxists in this case: to resist arm in arm with the entire spectrum of forces on the side of the Sudanese revolution. If this initial struggle is lost and Gosh consolidates his dictatorial powers, it will be very difficult for the mass movement to recover, unless a new revolutionary wave sweeps over the entire Arab world.

The Second Spell of the Arab Revolution of the 21st Century has Begun!

In 2011, the 23-year long dictator Ben Ali was ousted in Tunisia and the 30-year long dictator Hosni Mubarak in Egypt was brought down within the time span of only one month. This opened up a revolutionary hurricane all over the Arab world, one that lasted for two full years. Unfortunately, this first Arab revolution ended with the victory of the counter-revolution.

We wound up our article of 25th February on the Sudanese revolution with the prediction that the Arab revolution was rising once again. Now, in the space of a mere fortnight, two strongmen, one Bouteflika, the 20-year long ruler of Algeria, and the other Omar al Bashir, the 30-year long ruthless dictator of Sudan, have been brought down. The second spell of the Arab revolution of the 21st century has begun!

Sungur Savran is based in Istanbul and is one of the editors of the newspaper Gercek (Truth) and the theoretical journal Devrimci Marksizm (Revolutionary Marxism), both published in Turkish, and of the web site RedMed.