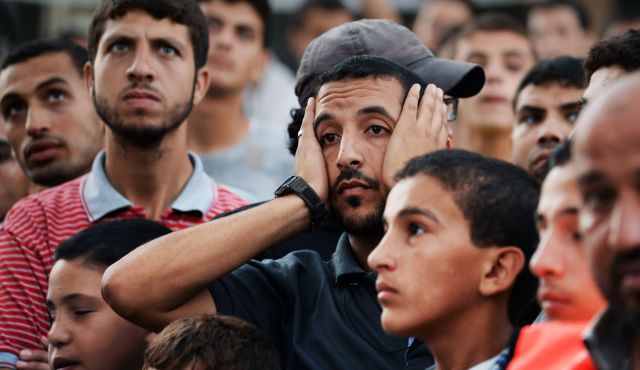 A European Green Light To Kill, Destroy And Pulverize Gaza

If the security of Jews in the Mideast were of real interest to European countries like Germany and Austria, they wouldn’t continue subsidizing the Israeli occupation.

In its ongoing silence, official Germany is collaborating with Israel on its journey of destruction and death, waged against the Palestinian people in Gaza. Germany isn’t alone – Austria’s silence is also deafening.

Actually, why single out these two countries? On the second or third day of the war, Chancellor Angela Merkel wasn’t the only one to declare that she stood beside Israel. The entire European Union supported Israel and its right “to defend itself.”

Yes, France and Britain did some squirming last week, making a few feeble sounds of protest. But the EU’s original stance, stated on July 22, still resounds. It accused the side under prolonged Israeli siege of causing the escalation. This is the side that, despite all the European declarations on its right to self-determination and an independent state in the West Bank and Gaza, is still under Israeli occupation after 47 years.

EU member states and, obviously, the United States, gave Israel a green light to kill, destroy and pulverize. They placed the brunt of the blame on the people launching the rockets, the Palestinians. The rockets are disrupting the “order” and the “quiet,” endangering the security of Israel, which is so weak and vulnerable, always attacked for no reason whatsoever.

Basically, the United States and Europe are endorsing the status quo under which the Gaza Strip is severed from the West Bank. The Israeli siege of Gaza and the oppression of the Palestinian population in the West Bank are Israel’s quiet, order and security. Whoever dares to violate this must be punished. In their passionate declarations on Israel’s right to defend itself, EU officials fail to mention the Palestinians’ right to security or protection from the Israeli army.

Europe and the United States didn’t give Israel the green light to escalate — to destroy, kill and inflict suffering on an unprecedented scale — at the outbreak of the current hostilities. They already gave it back in 2006, when they spearheaded the boycott of the Hamas government, elected in a democratic vote.

Even then they chose to collectively punish the entire occupied Palestinian population while ignoring the main reason this organization had won a majority: the pet Palestinian regime that Europe had fostered — the Palestinian Authority. This regime remains tarnished by two evils – corruption and the failure of its diplomatic tactics to achieve independence.

The PA’s conduct has led to a situation in which negotiations, a willingness to reach a peace deal with Israel and even opposition to an armed struggle for moral and practical reasons have become synonymous with the enrichment of a small group — alongside its cynical disregard for the rights and conditions of most of the population.

Neither quiet nor order

One can understand that Israeli security experts repeatedly misread both open and subterranean currents coursing through Palestinian society, which again and again disrupt the “quiet.” Those experts’ brains aren’t programmed to understand that the quiet and order they’re supposed to preserve are neither quiet nor order.

Two weeks ago, Jacob Perry, the public’s darling and a key figure in the documentary “The Gatekeepers,” said he hoped the security establishment would be able to contain the latest wave of demonstrations in the West Bank.

“These demonstrations are bad for them and for us,” said the former head of the Shin Bet security service in a typically paternalistic manner. Indeed, the army, which did not wait for his advice, continues to kill demonstrators who do not endanger soldiers’ lives. They do this every week and wound dozens of others (two more were killed this weekend). Even after 47 years, security officials don’t get it that oppression does not lead to submission. At most it only postpones a much bloodier confrontation — as is now happening in Gaza.

But what of Europe’s experts, aid workers, diplomats and civilian and military advisers, and the lessons accumulated over the many years of colonialism? One would have thought that all these people and events would have prevented Europe from making such an egregious mistake in 2006, from which arose all the escalations soaked in Palestinian blood.

The boycott of Hamas, which in effect was a political boycott of the Palestinian people in the occupied territories, encouraged Fatah and PA President Mahmoud Abbas to overturn the election results by nondemocratic means. The boycott and Western contempt for the election result only goaded Hamas into extreme and desperate channels, turning it into a martyr and a respectable alternative in the public mind.

In fact, this wasn’t a “mistake” but rather a conscious decision. European countries and the United States are willing to invest billions of dollars in the Palestinian territories for the reconstruction of rubble created using American, and probably European, arms. These dollars address humanitarian disasters caused by the Israeli occupation.

Europe and the United States are willing to fund tents, food and water in order to domesticate a leadership held captive by these donations. These leaders therefore promise not to disrupt the quiet and order. It’s not justice and the Palestinians’ rights that the West holds dear, it’s the maintaining of “stability.”

Germany and Austria are particularly noteworthy. Because of them there’s the impression that the European Union is so supportive of Israel due to guilt feelings over the murder of Europe’s Jews under German occupation, and due to a moral commitment to the direct offshoot of that chapter in history, the State of Israel.

Shielded by the Holocaust, there is no need to discuss Western interests, whether American or European. These include the continued control, through trusted agents, of oil and gas resources, the protection of markets and the safeguarding of the “security” of Israel as a Western power, perceived as a stable entity that can contain and counter the changes in the region.

If the security of Jews in the Middle East were of real interest to European countries, especially Germany and Austria, they would not continue subsidizing the Israeli occupation. They would not give Israel a permanent green light to kill and destroy.