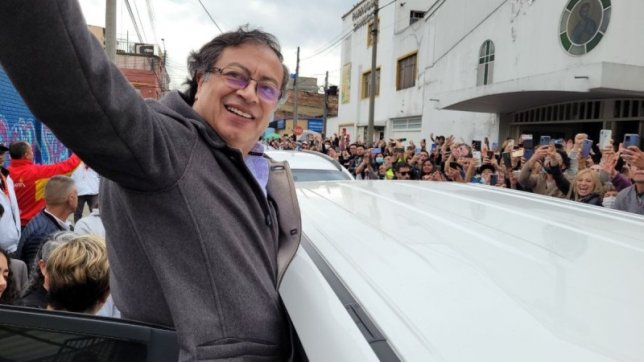 Gustavo Petro’s election victory in Colombia is a major blow to Justin Trudeau’s bid to bolster reactionary and pro-Washington governments in the hemisphere. Sunday’s historic presidential vote is also poised to strengthen the socialist and regional integrationist forces Ottawa has sought to undercut.

An ex-rebel fighter, Petro is widely considered Colombia’s first ever left wing leader. While the senator and former mayor of Bogota has moderated his politics over the years, Petro’s running mate rose to prominence as an activist challenging mining companies. Francia Márquez will also be the first Black woman to hold the position of vice-president.

Ottawa would have preferred Petro’s multi-millionaire opponent, Rodolfo Hernández, given the Liberals’ longstanding support for current hard-right President Iván Duque. After Duque won a close election marred by fraud allegations, then Foreign Minister Chrystia Freeland congratulated him and said, “Canada and Colombia share a commitment to democracy and human rights.”

During a national strike last year in which security forces killed 50 people, Trudeau stayed quiet about the repression. After numerous Canadian rallies were held in solidarity with protesters in Colombia, Foreign Minister Marc Garneau released a statement ten days into the strike. Garneau criticized the security forces’ deadly violence in equal measure to protestors’ purported vandalism and also praised the Duque government, which had issued several menacing statements.

As I detailed in previous article for Canadian Dimension, Ottawa’s support for repressive Colombian governments is longstanding. Over the past three decades Canada has retained close diplomatic ties to Latin America’s most repressive state and has promoted capitalist policies that have contributed to Colombia’s extreme inequality.

Even with a sizeable share of seats in congress, Petro will face many obstacles (paramilitaries, narcos, military and oligarchy) to fulfilling his reformist agenda. But the regional political climate is fortuitous. In October, Luiz Inácio Lula da Silva is expected to trounce Jair Bolsonaro in the Brazilian presidential election. Since Andrés Manuel López Obrador won the Mexican presidency in mid-2018, left wing candidates have racked up many victories across the region. In October 2019 Alberto Fernández defeated wealthy businessman Mauricio Macri in Argentina while Pedro Castillo won the Peruvian presidency in June 2021. In December Xiomara Castro and Gabriel Boric won the presidencies in Honduras and Chile, respectively. In each of these countries the Trudeau government preferred the election loser.

From the start of his mandate Trudeau sought to bolster governments that undercut the socialistic, regional integration efforts that shaped Latin America between 2005 and 2015. Concurrently, the Liberals have sought to overthrow leftist governments in Venezuela, Nicaragua and Bolivia. But those governments remain, and if Lula wins in October the six biggest economies in Latin America will be governed by left or centre-left parties.

In November Daniel Ortega was re-elected president of Nicaragua. Two and a half years ago Ottawa severed aid and sanctioned officials from a government former US National Security Adviser John Bolton listed as part of a “troika of tyranny” (Venezuela, Cuba and Nicaragua).

For three and a half years Ottawa has claimed a marginal opposition politician was the legitimate president of Venezuela. In response to protesters throwing chairs at the self-proclaimed president last week, Foreign Affairs Minister Mélanie Joly tweeted, “we are deeply concerned by yesterday’s attack on interim President Juan Guaidó. We condemn all forms of violence and call for a prompt investigation so that the perpetrators of this heinous attack are brought to justice.”

All but a handful of countries have given up on the Guaidó fantasy. But not the Liberals. At the start of the month Joly met Guaidó’s foreign affairs minister in Ottawa (oddly, she subsequently deleted her tweet about the meeting.)

In a bid to elicit “regime change,” Ottawa has worked to isolate Caracas, imposed illegal sanctions, took that government to the International Criminal Court and financed an often-unsavoury opposition. They also launched the Lima Group of countries opposed to the Venezuelan government. But a number of the new left wing governments have formally withdrawn from the alliance and the Lima Group hasn’t met for over a year and a half.

Meanwhile, the Community of Latin American and Caribbean States (CELAC) has been revived, meeting twice recently. CELAC was established 12 years ago to weaken North American domination of the region and eventually replace the Washington-based Organization of American States (OAS). Ottawa is excluded from CELAC.

Recently Canada’s paper of record even recognized that Trudeau’s Latin American strategy had collapsed. In a Globe and Mail column titled “Canada’s flawed Latin America policy demands a reset—and distance from the US,” Dalhousie University professor John Kirk pointed out that Ottawa’s coup efforts have failed while its pro-US and corporate allies have faced a string of electoral losses to socialist, and regional integrationist, politicians.

The victory of the left in Colombia’s election is a further blow to Ottawa’s policies. Canada is becoming more and more isolated from the people and governments of this hemisphere.

Yves Engler has been dubbed “one of the most important voices on the Canadian Left today” (Briarpatch), “in the mould of I.F. Stone” (Globe and Mail), and “part of that rare but growing group of social critics unafraid to confront Canada’s self-satisfied myths” (Quill & Quire). He has published nine books.