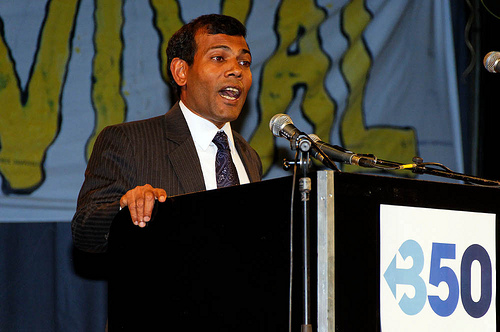 Mohammed Nasheed, the Maldives’ first democratically elected president, was ousted from the government in an alleged coup d’etat last week. The legitimacy of the presidential takeover and the events leading up to it are currently under investigation.

In an op-ed for the New York Times earlier this month, Nasheed described his decision to have Abdullah Mohamed, chief judge of the criminal court, arrested. This was the action that spurred protests that lasted weeks and eventually resulted in Nasheed being removed from government.

Nasheed believed Mohamed to have a strong political bias toward former president Maumoon Abdul Gayoom, who has been accused of corruption, embezzlement and human rights crimes. He also believed Mohamed responsible for corrupting the judicial system with this bias.

After Nasheed’s decision to have Mohamed arrested, Gayoom’s supporters—both civilians and government officials—began violent protests. Nasheed has claimed that protesters eventually forced him to resign at gunpoint, a statement has been dismissed by the new government, which states that Nasheed stepped down voluntarily.

“No, I had no involvement at all. I had no personal involvement in anything like a coup organised by myself,” Gayoom said according to AFP reports, “(Nasheed) resigned on his own.”

However, Nasheed holds that police and army officers were planning to assassinate him up till his decision to step down.

He and his officials have alleged that the former president and his supporters engineered the protests, and not the general public.

“I believe if I continue as the president of the Maldives, the people of the country would suffer more,” Nasheed said in a resignation statement published on his website. “I wish the Maldives would have a consolidated democracy. I wish for justice to be established. My wish is for the progress and prosperity of the people.”

Vice President Mohammed Waheed Hassan replaced Nasheed as president, according to the Maldivian Constitution. Nasheed is seeking Hassan’s resignation and early elections instead of an undemocratic takeover. He has also called Maldivians to civil disobedience if Hassan does not resign and opt for an early election.

“Fresh elections are our bottom line and we are not relying on the international community for that, we are relying on the people of the Maldives,” Nasheed told reporters. “The medicine here is on the streets, in strength.”

The new government has issued an arrest warrant against Nasheed for his attempt to arrest Mohamed, but this warrant has not been carried out yet. Waheed told the press that he was attempting to ensure that Nasheed not be put behind bars, but that this requires greater cooperation between the former president and law enforcement agencies.

Hassan has refused the idea of early elections, stating that the police, elections commissions are not yet sufficiently prepared for a free and fair election. Instead, Hassan has voiced his desire to form a National Unity Government with Nasheed’s Democratic Party joining Hassan’s Cabinet.

Nasheed has rejected this proposal, despite the idea having been backed by the United Nations and the United States. U.N. Assistant Secretary-General for Political Affairs Oscar Fernandez-Taranco called on all parties to come together “on the principle of inclusiveness and national unity, and reach a consensus on the way forward.’’

Member countries of the Commonwealth Ministerial Action Group (CMAG) including the UK, Germany and Australia have expressed concerns over the legitimacy of the Maldives’ transition of power, highlighting the need for independent investigation into the matter.

Following this, Waheed invited member countries to visit the Maldives and conduct their investigations. If the existence of foulplay is determined, the Maldives will face removal from the CMAG.

In the meantime, human rights organizations such as the UK conservative Party’s Human Rights Commission have voiced concerns over securing Nasheed’s security, liberty along with that of his supporters.

Nasheed, a human rights campaigner, has gained global recognition for his activism for global warming in particular. He has worked to create greater awareness of climate change, bringing people of lower socio-economic backgrounds and their human rights more prominently into the debate around global warming. His work has earned him awarded including the United Nations’ Champions of the Earth prize in 2010, in recognition of his attempts at achieving global climate neutrality.

Take action to help Nasheed by signing this petition.