Home > English > NEWS AND ANALYSIS > In Memory of Asma Jahangir 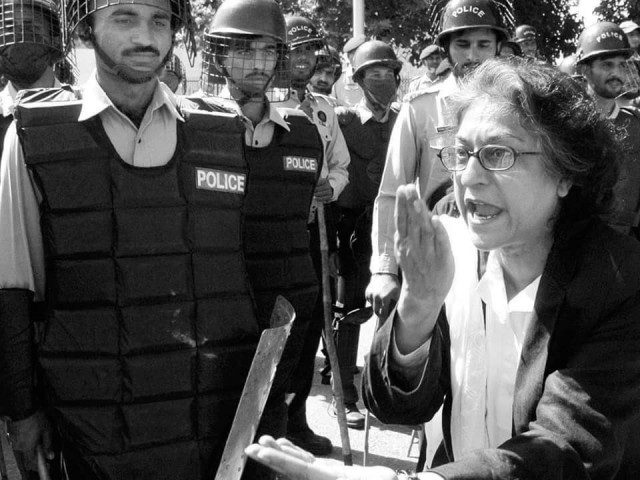 In Memory of Asma Jahangir

Geneva, 16 March 2018: Asma Jahangir was known for speaking up when many others feared doing so. And I apologise in advance, as no speech can do justice to her profound investment to the cause.

Asma Jahangir stood up to oppression and discrimination since her youngest age; and the woman once nicknamed ‘little heroine’ was to grow into a fierce human rights defender and an example for all of us fighting to make this world a little bit better.

At first committed to using the law to protect the human rights of all persons, she set up, together with her sister and fellow activists, the first law firm established by women in Pakistan. She defended the rights of the most vulnerable and the issues closest to her heart such as women’s rights, minority rights and children’s rights. Long before her active engagement at the international level, she invested her time as a lawyer, as a civil society activist, and as a founder, board member and member of a large number of NGOs. In each of these positions, she has followed the same exigence: to make sure that what we do is useful for the people whose rights are being violated.

Acutely aware of the issue of blasphemy offences and sensitive to the rights of ethnic and religious minorities, she was appointed Special Rapporteur on freedom of religion and belief in 2004 – enabling her work and her voice to gain international acknowledgment. She was widely respected by governments and was able to engage them even on politically sensitive national issues. She denounced the increasing religious intolerance worldwide as well as the large scale impunity among those who commit crimes in the name of religion. In delivering the Amartya Sen lecture last year, she also warned that ‘one should be careful while bringing religion into legislation, because the law itself can become an instrument of persecution’.

As an unwavering support to the fight for human rights, civil society organisations and the UN, she was later on appointed Special Rapporteur on the human rights situation in Iran. In a career already filled with fighting for justice to improve the lives of women and minorities in her country of origin, this was an additional challenge she took on with grace and tact. The smear campaigns and hurdles placed by the Iranian government to thwart the work of her mandate did not stop her from engaging on the key issues. The substantive report on the human rights situation in Iran we have been discussing at the Human Rights Council this past week, and the plans for meetings and consultations with a previously reluctant Iranian delegation, are all hallmarks of her great achievements for improving the lives of Iranians. Her mandate on Iran was short, but it was long enough to familiarize a community of Iranian human rights defenders on the magnitude of her work and might.

This, in essence, encapsulates both the humanity and perseverance of a woman who took on power and injustice in some of the most difficult situations.

In many ways, Asma’s life as a human rights advocate is reflective of many courageous defenders living in any corner of the world. She has encountered successes and she has encountered failures, but she never did stop fighting. She has been placed under house arrest, she has been the subject of death threats, and she has been vilified through smear campaigns, but she did never surrender. She demonstrated what it really takes to defend human dignity - from standing up for the most vulnerable people on the ground to defending international law in senior UN roles.

She was a woman of many causes. The cause of women, the cause of ethnic and religious minorities, in Pakistan and elsewhere, the respect for due process and fair trial safeguards, the rejection of death penalty, and – very importantly for her – the intolerance for undemocratic ruling. When offered to become a judge in the mid-1990s, she replied, ‘It would be a hypocrisy to be a judge, and to defend a law I don’t believe in.’ She was a passionate defender of the rights, freedom and dignity of all in Pakistan throughout her life, in Iran in the past couple of years and across the world for the past decades.

For those of us who knew her, she was blunt, she was exigent, she was passionate, she was tremendously courageous, and she was uncompromising with her principles. Pakistan is lucky to count a woman like her as one of their nationals. And the human rights community has been lucky to have someone like her as a leading figure. Her passing represents a terrible loss, and all of us who fight for human rights would have needed her compassion, her inspiration, and her courage to be around for decades to come. She will remain a source of inspiration for us all, including for the young generation of human rights defenders, and a source of energy to continue the collective endeavor she has so generously contributed to.