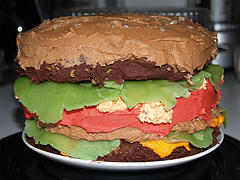 Happy birthday, Canada! And what better way to celebrate than throwing a $1 billion dollar birthday party. Curious, though, that most of it was spent on keeping people away from the festivities and that there were rubber bullets in the goodie-bags.

Curious too that, between bites of caviar-stuffed lobster wrapped in sirloins of Kobe beef braised with gold dust flecked foie gras, we lectured guests on the joys of austerity. I exaggerate a smidge, of course. Opinion without exaggeration is like conservatism without hypocrisy— an impossibility by definition and, if missing, is not nearly as gratifying.

But I digress. Back to the table. Here’s some— ahem— food for thought. Food stops thought. Try thinking after a big meal. Name one great thinker who was fat. Epicurus you say? Not with those cheek bones if millennia-old busts are anything to go by. Buddha? Likewise. And even if one were to defer to those pot-bellied statuettes of his, it doesn’t count; he was a vegetarian for the most part so I suspect the weight was thyroid related.

Or, some thinkers may have become rotund later in life by dining out on svelte glories past, after the motivation to produce— the infamous lash of hunger— ceased, but the rule holds. Is it a coincidence that those countries now considered to be the most dynamic and innovative, those same countries with politically astute and active populations, consume fewer calories per sitting than those of us from lethargic countries with an apathetic citizenry of glorified herd animals who graze without a thought that runs past the next mouthful?

Is it a coincidence that nothing remotely brilliant has ever come from any international summit with a banquet hall? Therein, Dear Reader, lays my proposition. Withhold food from our leaders. It will both stimulate their minds and reduce our budgets. It may even help them to relate to some of the hardships of the world. No more Angus for Stephen Harper? DING. Global warming cooled and taxes placed on financial transactions. No more bangers and mash for David Cameron? DING. London’s markets tethered and, with them, the world’s. No more poi for Barack Obama? DING. We transcend to a world of peace.

And I haven’t even mentioned the best part yet, my pièce de résistance if you will. DING. DING. DING. Uh-oh, my lunch is ready.