Home > English > NEWS AND ANALYSIS > What Next For Gaza After Current Ceasefire? 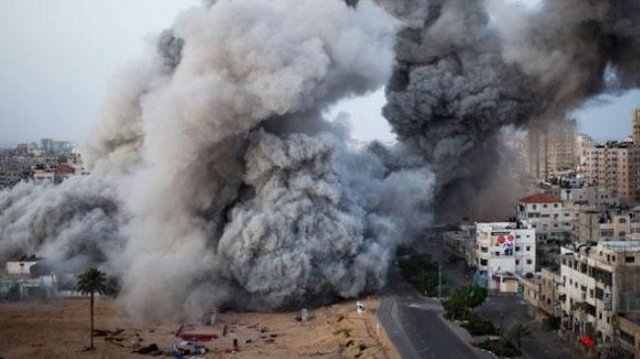 What Next For Gaza After Current Ceasefire?

Israel and Hamas agreed to a 72 hour ceasefire as of Tuesday morning, and negotiations continue for a longer-term solution. What comes now for Gaza and are the results of Israel’s military operation and victory of the Palestinian resistance a game changer?

Israel announced the withdrawal of its military forces from the Gaza Strip as a 72-hour ceasefire between Israel and the Palestinian resistance came into effect Tuesday morning. Shortly before the truce began at 8am local time, the Israeli air force staged at least five raids on Gaza.

Netanyahu issued a statement after the troops retreated on Tuesday, recognizing that Israel failed to meet its objectives in the offensive, claiming “there is no guarantee of 100 percent success, but we did everything to achieve the maximum”.

The current ceasefire is the second time in four days that the two sides attempt to observe a 72-hour humanitarian truce deal, with the last attempt on August 1 shattering in an explosion of violence within just 90 minutes. The breakthrough emerged in Cairo, where Palestinian and Egyptian mediators had been discussing a ceasefire with Palestinian representatives. Israel was not present at the discussion, although an official said Tuesday that a team was on its way to Cairo.

The Israeli security cabinet met on Tuesday night to discuss the negotiations in Cairo to put together a more lasting arrangement. Israel demands that Gaza be demilitarized and requires a mechanism to ensure that no arms will be provided to the Palestinian resistance.

The resistance demands an end to the siege on Gaza and honoring the deal that led to the release of Gilad Shalit by releasing all prisoners liberated in the deal who were re-arrested in June.

Sources close to Hamas claimed the Egyptians have rejected several of the demands presented by the Palestinian delegation a few days ago, including the reopening of the Rafah border crossing and the airport in the southern Gaza Strip, as well as the construction of a seaport.

Israel agreed to halt the offensive while attempting to make political achievements in Cairo after it failed to defeat the resistance.

According to Israel’s Channel 2, the army estimates that defeating the resistance would require a price the Israeli society is not ready to pay. According to the army, in such a scenario hundreds of soldiers will be killed and a number of others kidnapped, dead or alive. Moreover, the army added that an operation to “cleanse” the Gaza Strip after the defeat of the resistance would take five years.

Nonetheless, Israeli officers continue to threaten that the army is ready to reopen the offensive.

"If Hamas violates the truce it will be making a serious mistake," OC Southern Command Maj.-Gen. Sami Turgeman said Tuesday after the ceasefire started.

The southern command chief added that the coming days will shed light on whether Hamas will hold its fire, adding that its military wing had sustained "very serious damage."

It is reported that in Cairo, Israel will agree to the rebuilding of the Gaza Strip in exchange for demilitarization of the coastal area.

The Israeli offensive on Gaza caused the death of more than 1,800 Palestinians, the majority of them civilians. Sixty-four Israeli soldiers and three civilians were killed.