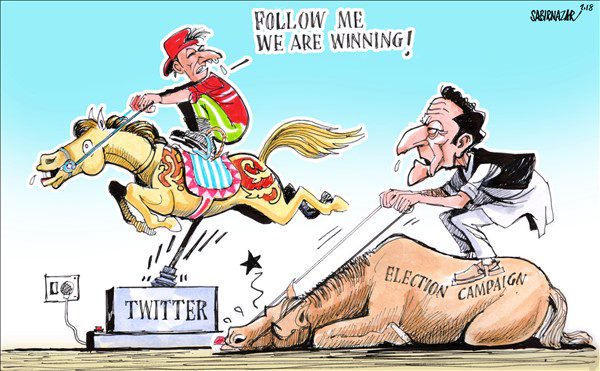 The ECP claims that “the Remote Transmission System (RTS) broke down, hence the announcement of results was delayed by a few hours.” Was the RTS deliberately glitched because the Agriculture Department panicked when the opposition began to weigh in and something had to be done to get things back on track? Even if it was an unforeseen breakdown, this does not explain why the polling agents were kicked out while the votes were being tabulated or why such lengthy delays ensued.

In the next year or so, we should expect scores of petitions to be filed wherever the margin of PTI’s victory is less than 10,000 or thereabouts. Thousands of bags will be opened and hundreds of thousands of ballots recounted and thumbprints matched. Thousands of Form 45 will be scrutinized. But none of this huffing and puffing will bring Imran Khan’s house down because he is protected and propped up by the Miltablishment.

Imran Khan will be Prime Minister, he will choose the next President of Pakistan and the PTI will rule in Islamabad, KP and possibly even in Punjab while mounting stiff opposition to the PPP in Sindh. Why was such a sweeping victory required of it? What should we expect in the new Pakistan?

To be fair, Imran Khan cannot be denied his fair share of the voter, especially among the new youth, urbanising white-collar middle-class and rich. His prospects became brighter after he started to enroll “electables” regardless of the colour of their money or character. Equally, the PMLN, whatever its self-righteous claims or principles, was well and truly on a suicidal path. But electoral engineering on such a large scale was still necessary to provide legitimacy for a constitutional and political overhaul. What’s on the cards?

A State of Emergency could be imposed under the garb of financial necessity pinned to the alleged misdeeds of the previous regimes. The numbers in parliament will not be too difficult to get. Such an Emergency would restrict fundamental rights and pave the way for a witch hunt of political and media opponents in order to satisfy the bloodlust of the winners (IK has said he won’t do that), protect them from any potential buffeting by a disgruntled opposition and detract criticism from unpopular policy decisions or incompetent and corrupt mismanagement. If that happens, we should expect NAB, FIA, FBR and IB to get hyper active after all state institutions are brought on the same page.

The constitution may also be targeted for amendment. The 18th Amendment, for starters, has become irksome because it shaves the federal pool — which is required to pay for increasing defense expenditures and pensions— by devolving financial resources to the provinces. A need may also be felt to reduce the size and strength of Punjab in the scheme of things, especially since the development of a critical fissure in the historical pro-Miltablishment character of the province. Plans remain on the anvil to carve it up into three or more “units” that are politically more “manageable”.

But the “new dream team” that is lining up to run the “new Pakistan” will not find it easy going. The economy needs more than a shot in the arm. Hard times are upon us and the very middle-classes and rich that have catapulted Imran Khan to office will have to pay the price of their convictions. The value of their rupee is going to fall, so their everyday needs will become expensive; they will have to pay more indirect taxes and duties; and IMF structural reforms will dampen infrastructural growth and employment. This will give grist to the opposition, media and judiciary to stand up and create hurdles in his path.

Admittedly, the Miltablishment has stitched up an extraordinary political dispensation in difficult times. But, unlike Nawaz, the person they have chosen to lead it is strong-willed and unpredictable. In fact, Nawaz was eminently pliant. Yet, after a while, he felt compelled, given the nature of power, to try and be his own man. But this was unacceptable and he had to pay the price for even thinking such rash thoughts. Imran Khan, on the other hand, is a different kettle of fish. He may have embraced the Miltablishment as a tactical move but sooner rather than later he will begin to challenge the conventional wisdom of the national security state handed down to him. That’s when all bets will be off.

Meanwhile, let us not spoil their honeymoon with grudging digs and pin pricks.