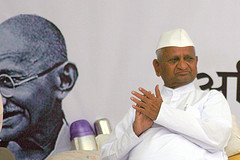 Yet Mr. Hazare, 74, has emerged as the unlikely face of an impassioned people’s movement in India, a public outpouring that has coalesced around fighting corruption but has also tapped into deeper anxieties in a society buffeted by change.