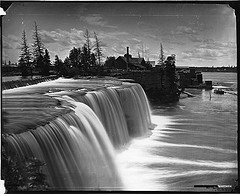 Aid Falls on the Rideau

On 8 September 2000, following a three day Millennium Summit of world leaders at the headquarters of the United Nations, the General Assembly adopted the Millennium Declaration. The Declaration of 2000 reminds us that without intervention from the world’s wealthiest, increasingly large numbers of people would face destitution.

This process provided the Canadian government with the political rationale to increase development budgets to the approval of both Canadian voters and the international community and after almost a decade of decline, Canadian Official Development Assistance rose from C$2.6 billion in 2000-2001 to C$4.1 billion in 2004-2005. This corresponded to the UN Millennium Development Goal aimed towards allocating 0.7 percent of gross national income to foreign aid.

The problem is that while the Millennium Goals were used as the political rationale for increased aid spending, in practice the Millennium Goals are no longer the only target: observers such as University of Ottawa professor Stephen Brown remark that as Canada’s official development assistance budget expanded, so did things like ‘interdepartmental coordination’ and as the Canadian International Development Agency gained importance, its autonomy to achieve its mandate declined: resources were captured by parties more interested in Canada’s own security, diplomatic or commercial interests.

Two years ago, Canada passed its own Development Assistance Accountability Act, also known as the Better Aid Bill, Bill C-293. The bill was designed to ensure the transparency and accountability of Canada’s aid spending. Aid spending was also supposed to be used for the clear purpose of poverty reduction, as per the Millennium Goals and as per where Canadian taxpayers believed their aid money should be going: doing things like taking into account the perspectives of the poor in a manner consistent with Canadian values, foreign policy and international human rights standards. There were three exceptions, though: when official development assistance goes to ‘natural disasters’ or ‘artificial disasters’ or other ‘international emergencies’.

The exceptions mentioned in the Better Aid Bill became all-important and as perhaps an ‘artificial disaster region’, Afghanistan remained the lead recipient of Canadian Official Development Assistance – by far – to the point that most of Canada’s Official Development Assistance increases over the last three years went directly there. It was difficult for CIDA to establish its mandate in Afghanistan. Security considerations meant that Canada’s Department of National Defence, not CIDA, called much of the shots and much of CIDA’s budget was handed over to the World Bank, various United Nations Agencies and the Asian Development Bank.

The end result is that today, Canadian assistance rarely serves to facilitate marginalized populations in finding their own solutions to poverty. Professionals still committed to the Millennium goals found themselves shut out of the Canada’s new aid picture. Only 32% of Canadian aid in 2004 was made available to community organizations in poor countries to implement their own development strategies, down from 39% in 2000. Development aid administered in cooperation with Canadian civil society organizations has been dropping correspondingly: in the five years up to 2004-2005, the proportion of CIDA aid resources managed by Canadian non-governmental organizations declined from just under 30% to less than 20%.

More recently, strenuous efforts on the part of civil society organizations and Ministries such as CIDA to renew the role of the grassroots for poverty alleviation in development led to High Level Forums in Accra, Ghana in September of 2008. But today, civil society organizations still in operation are finding working conditions near impossible, funding delays exorbitant and bureaucracy slow to the extent that it precludes adequate planning. In addition, a number of non-governmental development experts most critical of what’s happened to Canada’s assistance programs have found themselves audited and evaluated to no end, demonized in the press, and unemployed.

Now with an economic crises, the Millennium Goals receding into the distance and CIDA’s reputation ruined, the government has announced a freeze on future aid budgets. According to recently-released OECD data, Canada provides the 16th lowest percentage of Gross National Income to aid amongst the world’s 22 richest nations, 0.32%. Its aid allocation in 2007 was even lower than its contribution in 1969.

Get ready for it – like the 0.7% promise of a generation before- the Millennium Development Goals are set to become yet another promise to the world’s poor that was not kept.

This article was written by Vanessa Gordon, a former internship program officer for Alternatives and editorial board member of Alternatives International Journal. She holds an MA in Comparative Ethnic Conflict, and is a Professor at Dawson College.