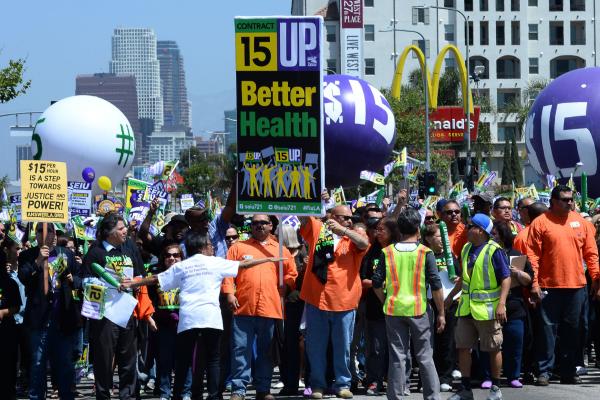 The Fight for $15: A National Cry for Workers’ Rights in the United States

As Iowans gathered on February 1st to endorse party nominees for the American presidential election, thousands of fast-food, home-care and child workers in Des Moines staged Iowa’s first fast-food labour strike to voice their demands for a $15 per hour minimum-wage and the right to unionize.

The Iowan fast-food labour strike is no isolated protest — an American social movement dubbed the ‘Fight for 15’ has grown steadily since 2012, when fast-food workers in New York striked in what became one of the first mass-scale labour actions in 21st century America. The New York workers called for some of America’s largest corporations, fast-food chains, to pay workers $15 per hour, and insisted corporations begin conversations with labour unions to improve job safety, security, and sustainability.

All this against the bleak Midwest backdrop: since the early to mid-2000s, state legislation in the American Midwest has sought to squash labour unions and workers’ rights movements. Republican leaders have slashed collective bargaining rights for public sector workers (such as Wisconsin’s 2011 freedom-to-work bill), considered passing state legislation against unions (in Missouri, New Mexico, Kentucky, Illinois and numerous other states), and issued executive orders unions barring non-union workers from paying union fees (in Illinois, for example). Federal law already permits workers to opt out of unions, and the American right-wing continues to bolster state-level anti-labour policies.

The Fight for 15, which began in New York in 2012 with the “Fast Food Forward” worker’s campaign (backed by the Service Employees International Union) and quickly gained traction in states throughout the United States, is based on a simple yet systemic issue: American workers just cannot survive on the current minimum-wage standards. The National Employment Law Project reports that over four in ten American workers earn less than $15 per hour. American food services make up the vast majority, that is, 96 per cent, of ultra- low wage earners. $15/hour is the bare minimum needed to live decently anywhere in the country. Even the most enticing meritocracy-myth (read: the American Dream) cannot compete with the stark inequity of the statistics.

The movement has also garnered support in Canada — Canadian solidarity movements in the Fight for 15 reveal the broader scope of issues regarding wages and labor standards, as the movement has sought to reach global support. The spread of solidarity for the movement demonstrates how mass communication in the age of the Internet can prove to be a powerful tool in the fight for grassroots social justice movements, especially regarding issues that impact large portions of the population. President of SEIU Local 1, Sharleen Stewart, has expressed that the union focuses on corporations like McDonald’s that offer little to their low-level employees. The SEIU has organized the McDonald’s protests, which have taken place outside of several McDonald’s restaurants across Canada, as well as the McDonald’s Canada headquarters in Toronto.

As with the Fight for $15 in the United States, the Canadian movements have expanded to represent other low-wage laborers. The success of direct action initiatives in the United States and Canada reveal the power of civil disobedience for urging politicians to change their policies to represent the needs of the people. In Canada, the Fight for Fairness and 15 has drawn attention to much needed legislative changes, as the Ontario government has launched the Employment Standards and Labour Relations review in order to amend loopholes in the Employment Standards Act.

Despite the relative success of these movements in North America to put pressure on legislative reform, political activists have warned against construing the North American Fight for 15 as distinct from calls for broader socio-economic change. The success of the movement is rooted in its ability to impact policy, however, the Fight for 15 cannot be won simply by passing legislation that balances workers’ wages with the cost of living.

According to an article published by National Employment Law Project (NELP), the low wages driving the movement point to the structural oppression built into the labour force, and while “policies to raise hourly pay have drawn populist energy, they will not directly improve the lot of workers stuck in the informal economy, undocumented laborers, people who are part-time and erratically employed, or those trapped in jobs where wage theft and overtime violations are rife.”

In short, raising the minimum wage will not solve the numerous other issues that exacerbate income inequality in the United States. Moreover, raising the minimum wage is not enough to confront complex, overlapping systems of oppression: the Fight for 15 must be part of a broader call for social, economic, and political alternatives to neoliberalism. And the movement, though it has a long way to go, has made the effort to link the labour movement to other social-justice issues in America.

The Fight for 15 must align with other social-justice issues not only in content, but in form. The movement must certainly wage its fight in formal political and legislative arenas, but if labour is to generate systemic economic change, workers must continue to channel their energy in direct action initiatives and civil disobedience.

When cries can be heard through the streets, the voices can be unified under a common cause that might otherwise get sifted through the holes of convoluted bureaucracy. The struggle now is to bridge the gaps between different social movements, in order to strengthen the power of the people in the fight for social justice. The Fight for 15 points to the capacity and the need for such movements to build strong coalitions, in order to unify specific problems under the umbrella of broader structural problems within the North American neoliberal system.

The power of mass communication has proven over the years to be a successful avenue for the unification of otherwise disjointed movements. The capacity for the Fight for 15 protests to put pressure on politicians to push for legislative reform demonstrates that the strength of these movements can only grow. Civil disobedience will continue to be necessary for maintaining social justice, and movements like the Fight for 15 provide avenues for citizens to organize, unify, and demand change.