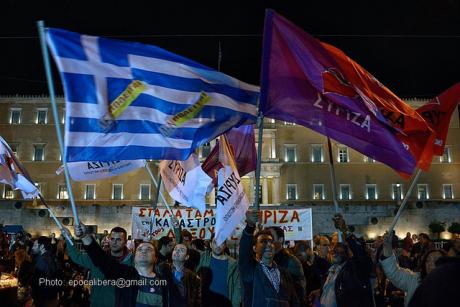 The 2015 Greek elections mark the beginning of the end of a cycle that started in 1989 with the fall of the Berlin Wall. We are now witnessing the end of the "end of history" metanarrative.

According to an oft-repeated cliché, the recent Syriza victory has historic significance. Its place in history books as the first elected left government in Europe is assured. But its importance goes further. The Syriza victory is an important marker in three historical periods or concentric cycles that started in 1949, 1968 and 1989.

The year 1949 symbolises the beginning of the Cold War. The Greek civil war ended with the defeat of the left. In the long period afterwards, which culminated in the 1967-1974 Colonels dictatorship, the people who formed the backbone of resistance to the Nazi occupation were persecuted, exiled and imprisoned. A strong right-left divide was established with the right dominant and the left accepting its political defeat and retreating to trade union activism and theoretical utopianism.

This historical and ideological divide was shaken in the many acts of resistance against austerity and in the 2011 occupation of Syntagma square by the Greekindignados. Unlike other instances of the Occupy movement, Syntagma attracted people from all social classes, historical and ideological traditions including many who had never participated in a protest. People from antagonistic positions found themselves together and realised that an unemployed rightist and leftist suffer the same, that a religious patriot and an atheist internationalist resent equally the humiliation in the hands of European and domestic elites.

When the resisting multitudes became the voting people, they chose Syriza. The small protest party of 4% in 2009 rose to 27% in 2012 and 36% in 2015. The 9% victory margin was largely due to the direct transfer of votes from right to left. The New Democracy government sensed the sea-change and tried to resurrect the ghosts of the past in its ill-conceived election campaign. Greece under Syriza will go communist and become like North Korea stated former PM Samaras. We will protect “by all means necessary” what our fathers won with armed struggle, added a senior Minister. But this attempt to bring old ghosts to life did not work. The old ideological divide collapsed allowing the left to move through its electoral glass ceiling.

In this sense, the election marked the end of the post-civil war period and perhaps the second end of the Cold War. The Syriza coalition, with the small patriotic Independent Greeks party, confirms this view. The DNA of the left lies in its militant support for immigrants, gay and lesbians, Roma, ethnic and religious minorities. It remains intact. Tassia Christodoulopoulou, a well known lawyer and campaigner for minority rights, was appointed Minister for Immigration. She immediately announced legislation to give citizenship to immigrants who had their basic schooling in Greece, a provision missing from many European legal systems.

The 2015 elections are also the beginning of the end of a cycle that started in 1989 with the fall of the Berlin wall. The “end of history” and the “new world order”, proclaimed by Francis Fukuyama and President Bush, presented liberal capitalism as the last stage in humanity’s progress.

But this is the economic system in which 50% of world wealth belongs to 1% of super-rich, according to a recent Oxfam report. The Syriza victory rejects this catastrophic orthodoxy and, in a small way, puts history back on the road. The government’s immediate adoption of a tranche of measures aimed at helping the most vulnerable attracted a positive response from European politicians and citizens across the political spectrum.

If the elections bring the periods starting in 1949 and 1989 to an end, they re-start the 1968 cycle. May ’68 symbolises the counter-cultural revolution by young people all over the world. In the period since the fight against discrimination and for the rights of minorities and the environment has been successful but blunted.

The 68ers holds the reins of power in governments, business and the media. Human rights, the toleration of difference and the rhetorical condemnation of discrimination have become part of the ruling vernacular but have not changed the balance of forces. Human rights replaced the struggle for social justice and ‘humanitarian’ wars became the logical extension of turning every political campaign into a question of rights. The centrality of the individual gives capitalism a human face but does not challenge growing injustice.

Greece joined the cultural revolution after the 1973 Polytechnic uprising and the fall of the dictatorship. The Polytechnic generation ruled the country for the last forty years. It accepted some of the May values but twisted them towards individualism and freedom of consumer choice.

The new government is called to reintegrate the values of difference and dignity in the struggle for social justice. The left horizon of equality and democracy must take on the rainbow colours. There is no blueprint or textbook and the new government will be tested every step along the way. It is a tall order for a small country and party. But if the Greek spring succeeds – it is a big if - it will mark the beginning of a new type of democratic socialism for the 21st century.