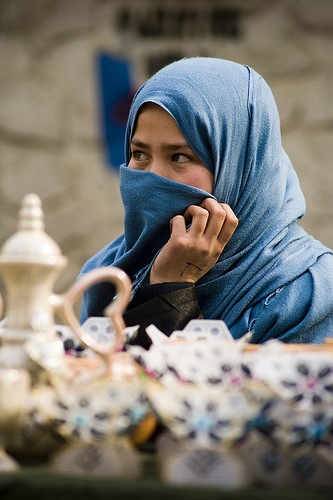 I met Abada on the set of Afghanistan’s first TV soap opera, “The Secrets of This House,” produced for Tolo TV. She has a small role as the good wife who comes back from America and is adapting to her new life in Kabul. Abada earns $100 an episode. It sounds lucrative, but there is no guarantee how long her character, and thus her job, will survive. She still teaches too, and had just returned from giving lessons, her daughter in tow. The show’s set was a three-story house in a residential neighborhood in Kabul that Tolo was renting.

At the age of 27, after 14 years of marriage, with seven children and a husband 30 years older than she was, a husband who was addicted to opium, who once deprived her of food because she gave birth to a girl and not a boy, who beat her when she took too long to conceive, who pulled out her hair and knocked out her teeth to make her too ugly to remarry, who beat her again when he couldn’t find money for opium because he had spent it on phone cards for the mobile to call his lovers — after 14 years, Abada had had enough. She cried, screamed, pulled out her hair, desperate to die. She put her littlest daughter outside the room where she cooked. She turned on the gas and waited for peace.

This life had never been hers anyway. From the time her father died and her mother remarried, she was deposited in someone else’s idea of life. First the stingy stepfather, who saw her as nothing more than a financial burden. Then the marriage at 13 to the 43-year-old addict. Then the mothering. Her first children were twins, and she found the will to live for her babies. One of them had a liver disease they called black tongue, and there was no one to buy her medicines but Abada. She began giving private lessons to the children in her neighborhood, teaching Dari, math, Koranic studies. And though the old addict insisted Abada stop her own studies, she and her mother devised a secret scheme for her to take exams at odd times, with the collusion of her teachers. She finished high school, then paid her way through college and earned a degree in education. Under the Taliban, when schooling for girls was illegal, she went on giving lessons. She gave birth to five more children, and her financial burden grew along with her husband’s irrationality.