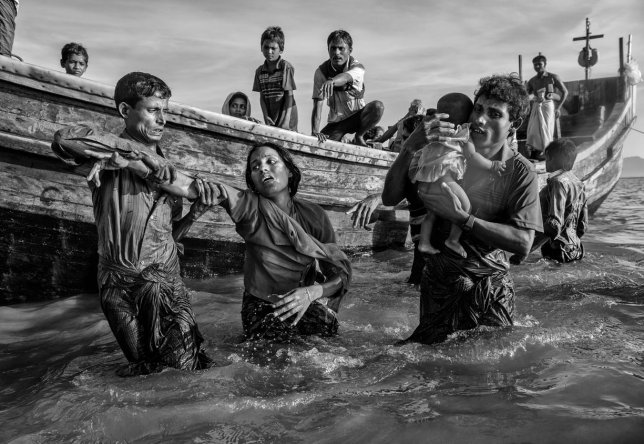 Rohingyas: Pawns in the Geopolitical Chessboard

The protracted Rohingya refugee crisis and in particular the latest cycle of hundreds of thousands of Rohingya people fleeing the massive military crackdown on an un-armed minority community should not be viewed as an isolated event. It should be examined in the context of the rivalry between China and the US, the West and India for control over Myanmar’s economic and mineral resources. In September 2017, Nikki Haley, the US Ambassador to the UN, did not mince her words in condemning the Myanmar military’s brutal crackdown that had forced Rohingya Muslim refugees to stream across the international border of Myanmar’s Rakhine state into neighboring Bangladesh. In her speech she had said, “The time for well-meaning diplomatic words” had passed and that “we must now consider action against Burmese [Myanmar] security forces who are implicated in abuses and stoking hatred among their fellow citizens.” She also called on Myanmar to “immediately remove and prosecute those accused of abuses.”

More than a year has passed. The USA and the West and the United Nations have done little more than, issue stronger words of condemnation and donate a few million dollars for housing and feeding the Rohingya refugees in Bangladesh. Despite the recent statement of United Nations Special Advisor on Genocide that the intent of the Myanmar army “was to cleanse northern Rakhine of the existence of Rohingya, possible even to destroy the Rohingya as such, which if proven would constitute Genocide” and his call for “immediate action”, it is extremely unlikely that the international community will initiate punitive action against Myanmar.

While the West had criticized Myanmar, China had praised Myanmar’s army for its tough and prompt actions for maintaining stability in Rakhine state. It is interesting to note that while the US Secretary of State labeled the military actions against Rohingyas as “ethnic cleansing”, India, USA’s strategic partner in South Asia, was on the same page with China, when it defended Myanmar military’s crackdown against the Rohingya as war against “terrorism”.

We are told that it is the fear that China might take advantage of this humanitarian crisis and regain its influence over Myanmar which the US and the West has been trying to lessen since the re-establishment of so-called democratic governance in Myanmar. Indian Prime Minister, Narendra Modi during his visit to Myanmar in September 2017 used the USA’s grand narrative of “War on Terror” in an attempt to link the so-called concerted attack by ARSA on 30 border police stations with “Islamic Terror”. Seeing a link between Myanmar military and the Bamar-Buddhist terrorist attacks on Rohingyas with the US and West sponsored global campaign against Islamic terrorism, will seem farfetched today, yet looking at India’s support of the ruthless Myanmar army, which has been leading genocidal attacks on the Rohingyas and the virulent anti Muslim propaganda by the Barmar-Buddhists, describing Muslims as dogs, one wonders whether keeping this region, and particularly Rakhine, in turmoil, is in the interest of the US and the West, which is keen to contain China’s growing economic and strategic influence in this region.

The right-wing Hindu government of India exposed itself when in a sudden volte face it singled out the forty thousand Rohingya refugees living in India for more than a decade for deportation on the ground that they were a potential threat to its nation security. The Indian government asserts that the Rohingya refugees are connected with “terrorist” organisations and claims that it is in possession of secret intelligence information on links with ISIS and Pakistani militants. No evidence has been produced. Many Indian and international analysts believe that Indian government’s treatment of the Rohingya stems from the ruling BJP’s “Islamophobia” as well as domestic political calculations that a tough line on Muslim refugees will play well with the party’s Hindu nationalist base. Clearly, the religion of the Rohingya is the main reason for India’s precipitate decision,

The silence that has greeted the global condemnation of Myanmar’s mass killing and eviction of Rohingyas, reflects the fact that there is zero support for direct action in Myanmar. The silence is not accidental. It is strategic. The international community, particularly the USA after having used its superior military powers under the doctrine of “responsibility to protect” in Kosovo, Sierra Leone and East Timor and later in Afghanistan, Iraq, Libya and Syria seem to have given up its self-defined “moral and humanitarian” responsibility.

About 870,000 Rohingya have been forced to flee to Bangladesh and up to 10,000 people have been killed so far by Myanmar army and marauding gangs of Buddhist fanatics. It also appears that Myanmar government is directly culpable. The 2005 UN Global Summit attended by 170 heads of States had intended to prevent such a situation. It promised that if and when such crises occurred, member states would take “timely and decisive action, in accordance with the UN charter”. This promise now lies in tatters. Lack of political will to implement the decision of the 2005 UN Global Summit that empowered the international community to act to prevent the most serious violations of international human rights and humanitarian law, is guided by the political and geo-strategic interests of the powerful nations.

In 1988, when the US, EU and Japan had imposed sanctions to isolate the then ruling military regime of Myanmar from the global community, China moved in with counterbalancing official aid, military sales and trade agreements. The heavy dependence on China was becoming uncomfortable for Myanmar’s ruling elite, and in order to break from that, the military rulers had introduced a so-called more pluralistic political system in 2010. A military backed party was brought to power through rigged elections. This sham of political reform had provided the fig leaf for the USA and the West to lift sanctions and begin ‘normalization’ of relations with Myanmar. The US President, Obama visited Myanmar in 2012.

China’s alignment with Pakistan and deepening relations with other South Asian countries represents a significant challenge to India’s position in the region, which New Delhi has dominated for decades. Indian Prime minister Mr. Narendra Modi’s September 2017 visit to Myanmar is evidence of the level of alignment of India’s foreign policy with the USA in South Asian region. During his visit he defended Myanmar’s right to fight against terrorism and linked the massive military crackdown against the Rohingya in Rakhine to the reported attack by ARSA on 30 border police stations. He did not raise the issue of violence against the Rohingya minority community in Rakhine. Modi also offered development projects in Rakhine province, where China already has an ambitious investment and infrastructure construction plans in Rakhine state worth $7.3 billion. The deep sea port that China is developing in Rakhine state fits into the Chinese mega Belt Road Initiative under which it is pumping huge sums of money into India’s periphery. Many analysts believe that during his visit to Myanmar Modi pursued the hardcore Hindu nationalist organisation, the Rashtriya Swamsevak Sangh’s vision of a “Hindu-Buddhist peace zone” in South Asia to confront China-Pakistan axis. This fits neatly into the strategy of the US and Western nations.

While most countries of South Asia and South East Asia have joined the ’One Belt One Road’ initiative, India has remained aloof. India has shown concern about Chinese investment in Gawdar (Pakistan) and Hambantota (Sri Lanka) and even tried to derail investments in Nepal and forced Bangladesh not to allow Chinese investments in Sonadihi and Chittagong ports. To thwart China’s advances in the region, India has built a strategic alliance with the United States. To the ruling Hindu right-wing government of India, it represents the best way to meet the challenge of China’s rise, because the United States is the only power that is stronger than China. New Delhi and Washington share a common interest in balancing Beijing.

Parallel to this, within India, there has been a hostile propaganda campaign against the thousands of Rohingya refugees who have found shelter here since 2012. Local Indian politicians in particular have been whipping up fears about illegal immigration and the resulting security consequences. Prime Minister Modi’s silence on the Rohingya issue during his first bilateral visit to Myanmar last September, is in line with India’s long-held tendency to put strategic concerns above rights considerations.

China made a conciliatory move through the “three-stage plan”. It mediated between Bangladesh and Myanmar to resolve the protracted Rohingya crisis. The plan was formally presented in Dhaka on 19 November by Chinese Foreign Minister. China also influenced Myanmar to sign the agreement to accept returning displaced persons from Rakhine state with Bangladesh on 23 November. It is clear for a poor country like Bangladesh, virtually abandoned by the global community in its hour of crisis, it was the only tangible option. However, the agreement has clearly redrawn the ethnic boundaries of the Rohingya heartland in the northern Rakhine state, with virtually no possibility for the Rohingyas to return voluntarily. The process of verification of the identity of the Rohingyas could potentially remain a source of dispute that may not only delay, as is already evident, but lead to complete collapse of the entire process.

Though the UN was not a party to this Chinese sponsored bilateral agreement for repatriation, it has accepted it. It has come as a face saving device for the global community as it seemingly provides a pathway for the UN High Commissioner for Refugees (UNHCR) and international development partners to be involved in the process of return and resettlement of the forcibly evicted Rohingya population. But the question that remains unanswered whether Myanmar is willing to recognise the Rohingya as citizens of the state. Without international intervention there is no possibility of the Rohingyas gaining citizenship of Myanmar. Otherwise, the Rohingyas will not be on any dignified path to citizenship.

Concerned with radicalizing of the Rohingya refugees, last year, Bangladesh government banned three Islamic charities — Muslim Aid, Islamic Relief and the Bangladesh-based Allama Fazlullah Foundation — from working in the Rohingya refugee camps. Bangladesh’s non-belligerent approach to this crisis has successfully avoided armed conflict situations. But it has come at a huge cost. Bangladesh’s current Awami League government has been cooperating with India on critical security issues and opening up its territory for transit to its remote north-eastern parts. India’s indifference to Bangladesh’s call for support for an international investigation in Myanmar military’s role in the massacre of Rohingyas in Rakhine and India’s support to Myanmar regime has hurt Bangladesh and strengthened Bangladesh who disagree with Awami League’s pro-India policies. China too refrained from supporting Bangladesh on multilateral

What the global community in general and India and other South East Asian countries in particular need to realise that leaving the entire burden of the nearly Rohingya refugees on Bangladesh may be convenient, but it is not safe. China trying to benefit from this gigantic human tragedy and the USA and the West issuing only empty threats, it appears that Myanmar’s military may be able to escape any punishment. The losers, of course, will be the refugees driven out of Myanmar into inhospitable camps in Bangladesh, where they may be stuck for years to come. The November 2017 bilateral agreement between Bangladesh and Myanmar is doomed to collapse. The Rohingyas will remain a pawn in the geopolitical chessboard.

The stateless Rohingyas have no country to return. Plainly, the Palestine effect of the Rohingya crisis is emerging as a stark possibility. The cumulative effect of Rohingya politics will surely transform internal politics in Bangladesh. A million people, tortured, raped, killed, forcefully evicted from their homes and abandoned by the global community, is more powerful that any nuclear weapon. When and how it will explode is any body’s guess. When the camps become hotbeds of militancy, the region will become an even more hotbed of geopolitical competition, destabilizing the established governments, giving greater opportunities to the ongoing disparate ethnic self-determination movements in Bangladesh, Myanmar, India and Thailand and possible balkanization of the region.