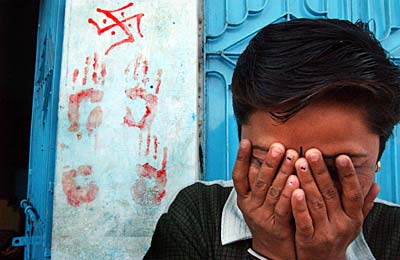 Resist Bigotry, Recover Solidarity: Say No to “Hindus for Trump”

February 12, 2018: We, the members of India Civil Watch (ICW) reject unequivocally the rank opportunism of “Hindus for Trump” (henceforth HFT) that leads them to offer to pay for President Trump’s proposed wall at the Mexican border as long as it will facilitate their own presumed ability to stay in the U.S.

The enthusiastic support of HFT’s members - immigrants or children of immigrants themselves - for Trump’s racist anti-immigration policies is the worst kind of political expediency. Supporting thus the bigoted and vindictive policies of an administration that openly expresses racist contempt against immigrants, minorities, and non-white populations of the world is an affront to South Asian communities in the U.S., a diverse population in terms of class, caste and status, which often shares with other Americans of color their struggles for dignity and a stable livelihood, and aspirations for lives free of racist and sexist discrimination.

HFT’s demands for exceptional treatment in the immigration process are based in ’model minority’ rhetoric, and an expectation that their class status should grant them immunity from America’s social hierarchies and legal regimes. They would however do well to heed Dalip Singh Saund, the first Asian-American elected representative in U.S. Congress, who compared caste in India with race in the U.S. while demanding civil rights for all.

HFT’s support for Trump’s “merit-based” immigration system is consistent with their opposition to affirmative action (known as “reservations”) in India, designed to provide access to jobs and educational opportunities to those suffering from centuries of oppression under India’s caste system. A large proportion of Indian immigrants are from communities of privilege that have benefited from caste hierarchy, which denied economic and social opportunities to generations of those consigned to so-called "lower caste” communities. It is not surprising that HFT is an avid supporter of the Islamophobic and casteist policies of Indian Prime Minister Modi, who, inspired by Hindu Supremacist ideology (known as “Hindutva") sees non-Hindus and oppressed castes as permanent second-class citizens.

HFT’s embrace of white supremacist rhetoric about immigration is particularly contradictory given the discrimination and exploitation that Indian workers historically faced in the U.S. It was barely a hundred years ago that Punjabi farm workers laboring in the fields of California made common cause and built community with Mexican immigrants working alongside them, navigating exclusionary laws around land ownership and civil rights, but also drawing hope in the commonality of their lived experiences.

ICW believes that our political work should be based on relationships of solidarity and a recognition of shared histories of neocolonial exploitation as seen in the shining example of the drivers from the New York Taxi Workers’ Alliance who staged an impromptu strike at JFK to protest against Trump’s Muslim ban. We list below a brief sampling of statements from South Asian and Indian groups fighting for labor, immigrant, and minority rights that have explicitly dissented from groups like HFT that support Trump’s bigoted policies.

A community that has produced a Ravi Ragbir who stands for the rights of the undocumented, should not have to settle for a Shalli Kumar (founder of ‘Hindus for Trump’), who seeks to ingratiate himself to white supremacists for a shameful seat at the table of injustice. Indian Americans can draw inspiration and take pride in a Kshama Sawant who fights for working people, instead of being embarrassed globally by a Nikki Haley who serves the dangerously militaristic foreign policies of the Trump administration. ICW calls on Indian communities in the U.S. to actively participate in anti-racist, anti-caste and and anti-colonial politics, both in the U.S. and in India.

List of Statements: • Statement by Sadhana, Coalition of Progressive Hindus about Hindus for Trump: https://www.facebook.com/sadhanaprogressivehindus/ • Indian-American lawmakers respond to the Republican Hindu Coalition (also founded by Shalli Kumar)’s support for Trump’s ‘Muslim ban’ and orders against refugees from anywhere: https://economictimes.indiatimes.com/nri/nris-in-news/indian-american-lawmakers-slam-republican-hindu-coalition-for-backing-donald-trumps-immigration-ban/articleshow/56906924.cms • Statement by SAALT about the rise in Xenophobia and hate crimes since Trump’s rise, documented in their report, “Communities On Fire”: http://saalt.org/wp-content/uploads/2018/01/Communities-on-Fire.pdf

India Civil Watch is a collective of Indian-Americans committed to furthering progressive politics in the USA and India. For more information, please write to indiacivilwatch@gmail.com