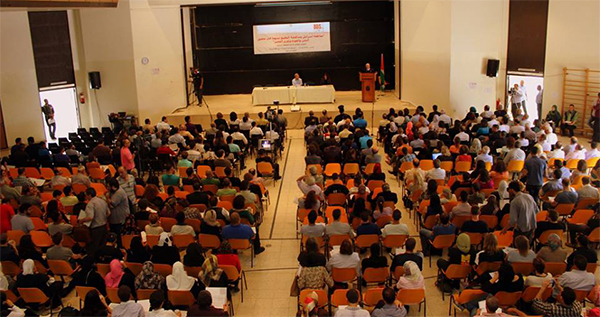 On 8 June 2013 the Palestinian BDS National Committee (BNC)[1] organized its “Fourth National BDS Conference” at Bethlehem University, under the slogan: “Boycotting Israel and opposing normalization contribute to Liberation, Return of Refugees, and Self-Determination.” With 700 participants, mostly representatives of the national committee member entities, including political parties, trade unions, women’s organizations, professional syndicates, youth and student groups, and other civil society organizations, the conference was hailed by several commentators as a “turning point” for the BDS movement’s local work. A substantial part of the credit goes to the selfless efforts of tens of — mainly youth — volunteers who worked for long weeks on organizing all aspects of the conference with dedication and aptitude.

Members of the Palestinian Legislative Council and the PLO Executive Committee also took part in the conference, underlining official recognition of the BDS Movement’s increasing clout and impact.

The conference aimed to promote and enable Palestinian society’s effective development of sector-based BDS campaigns with clear strategies and leadership teams. Recognizing how Israel is increasingly seeking Palestinian and other Arab “fig-leaves” to cover up its intensifying occupation, colonization and apartheid, one of the main themes addressed was the economic, academic, cultural, youth and IT sector normalization with Israel and ways of confronting it.

Following the National Anthem, Ms. Haitham Arar, Representative of the General Union of Palestinian Women to the BNC, introduced the guest speakers of the Opening Session, titled “Boycotting Israel: Rooted, Contemporary, Universal Resistance.” Brother Peter Bray, President of Bethlehem University, opened with a welcoming speech highlighting the importance of the BDS movement as an effective framework for nonviolent education and action that raises public awareness and empowers various sector of society to participate in the struggle for freedom and human rights. Mrs. Fadwa Barghouthi read a message of support from Marwan Barghouthi, a key Fatah leader and member of the Palestinian Legislative Council who is illegally incarcerated by Israel. Mrs. Abla Saadat then delivered a support message from Ahmad Saadat, the imprisoned Secretary General of the Popular Front for the Liberation of Palestine. The two messages confirmed the firm endorsement of BDS — as a main strategy of resistance and global solidarity with Palestinian rights — by leaders of the Palestinian national struggle.

Dr. Mustafa Barghouthi, Secretary General of the Palestinian National Initiative, delivered a speech on behalf of the National and Islamic Forces in Palestine, a main pillar of the BNC, in which he reiterated the firm conviction of Palestinian political parties of the futility of negotiations under the current imbalance of power and U.S. hegemony. Dr. Barghouthi emphasized that national unity, growing popular resistance, and effective international solidarity, particularly in the form of BDS, are the necessary components of a Palestinian strategy to end Israel’s occupation and apartheid, and to achieve self determination, the return of refugees and the establishment of an independent, sovereign Palestinian state with Jerusalem as its capital. He warmly saluted the BNC and the BDS movement, locally and internationally, for its recent spectacular successes and called for escalating the comprehensive boycott of Israel to isolate it as apartheid South Africa was.

South African Archbishop Desmond Tutu, one of the highest-profile supporters of BDS against Israel, addressed the conference via a recorded video message, saying he was “certain” that the Palestinian people will achieve their freedom one day, when they will walk tall with dignity in a free Palestine, drawing thunderous applause. This was followed by another recorded solidarity message from Roger Waters, a world celebrity and founder of Pink Floyd, in which he saluted the conference and reaffirmed his firm support for BDS until the Palestinians enjoy freedom, justice and equal rights.

The Opening Session was concluded by the main BNC speech, presented via videoconference by Dr. Haidar Eid, associate professor at Al-Aqsa University in the besieged Gaza Strip and Steering Committee member of the Palestinian Campaign for the Academic and Cultural Boycott of Israel (PACBI). Dr. Eid explained the BDS philosophy, strategies, South African inspiration, and some of its main successes. He also gave an overview of the multiple challenges, internal and external, facing the movement, highlighting some of the most important evidence of the movement’s impact on Israel’s system of occupation, colonization and apartheid.

Under the title “BDS Initiatives: Local, Arab and International,” the First Session started, chaired by Ms. Rif’a Abu-Reesh, representative of the Global Palestinian Right to Return Coalition, the largest alliance of Palestinian groups, inside and outside Palestine, advocating for the right of return for Palestinian refugees. It included a number of reports of actual boycott experiences and important lessons learned. Archbishop Attallah Hanna spoke about the experience of the “Kairos Palestine” group and its role in spreading BDS among churches worldwide. Dr. Samah Idriss, a well-known Lebanese publisher and author, spoke via videoconference from Beirut about the pioneering Lebanese experience in boycotting corporations that are complicit in Israel’s occupation and violations of international law. Dr. Tayseer Maray introduced the special forms of boycott adopted in the occupied Syrian Golan Heights in spite of the siege and isolation imposed by Israel. Dr. Mohsen Abu Ramadan, representative of the Palestinian NGO Network (PNGO) to the BNC, spoke from Gaza about the boycott experiences there and its main successes.

Activist Yafa Jarrar, who lives in Toronto, Canada, presented a report on “Israeli Apartheid Week” the leading annual campus-based BDS activity. Activist and lawyer Nisreen Al-Haj Ahmad presented the main elements of the Arab BDS campaign against G4S and its strategy. Dr. Samia Botmeh, director of the Birzeit University Center for Development Studies and PACBI Steering Committee member, highlighted some of the main success stories in the academic and cultural boycott of Israel. Imad Temiza, the young and determined head of the Palestinian Postal Services Workers’ Union, presented his union’s strategy in promoting a boycott of Israel’s postal services. Activist Mazen Al-Azzeh, a Bethlehem leader of the Palestinian National Initiative, spoke about the most important features and successes of the local “Bader” Campaign for boycotting Israeli products. A youth leader from Salfit, Diaa’ Shtayyah, presented a campaign to declare Salfit free of Israeli goods. Amjad al-Kassis, an international law expert from the Badil Center in Bethlehem, tackled Israel’s systematic ethnic cleansing of Palestinian communities and the importance of sanctions in confronting it. Finally, Raja Zaatry, the head of the Haifa branch of the Israeli Communist Party, represented the newly-formed group, BDS48, explaining the main prospects and challenges facing the group in spreading BDS among Palestinian citizens of Israel.

The Second Session, titled “Forms of Normalization and combating it,” was headed by Mr. Rasem Obeidat from the Civic and National Commission in Occupied Jerusalem. Dr. Islah Jad, director of the Center for Women’s Studies at Birzeit University and Steering Committee member of PACBI, presented the principles and guidelines of the Normalization Definition document, which was adopted by representatives of the absolute majority of civil society at the First National BDS Conference in 2007. Then Mrs. Rania Elias, director of Yabous Cultural Center in Jerusalem and PACBI Steering Committee member, gave an overview of cultural normalization projects and some success stories of BDS activists thwarting such projects, especially in Jerusalem. Dr. Yousef Abd Al-Haq, a leading economist, tackled the issue of economic normalization which he argued was the most dangerous form. Dr. Abdul-Rahim Al-Shaikh presented a compelling argument against academic normalization, giving examples of how it undermines the struggle for self determination. The last paper in this session was presented by the youth activist Zaid Shuaibi, Networking and Outreach Officer at the BNC, on youth and student normalization and its role in occupying the minds and hindering the struggle for Palestinian rights.

At the end of the session a display screen was revealed, surprising the audience with a picture of the renowned Lebanese singer Marcel Khalifeh, who addressed the conference from Beirut, stressing the importance of “saying NO” and standing up to tyranny. He saluted the boycott movement, focusing on the role of cultural boycott in the Palestinian and Arab struggle for freedom and emancipation. Sustained, loud applause was the audience’s response.

Under the title, “Facing the Public: Palestinian Officials and Civil Society Representatives Answer Questions About Boycotting Israel and Countering Normalization,” the Third Session of the conference, and by far its stormiest, was headed by Nasfat Khuffash, representative of the National Institute of NGOs to the BNC Secretariat. He introduced the panel speakers: Dr. Taisir Khaled, member of PLO Executive Committee, Dr. Jawad Naji, Palestinian Minister of the National Economy, and Omar Barghouti, representing the BNC. This session provided a rare forum for democratic accountability and questioning of officials. A large number of critical questions and interventions were raised, some of which were hard-hitting, even angry, reflecting the Palestinian public’s general discontent with the PA’s and PLO’s performance as far as resisting the occupation and struggling for Palestinian rights go.

In spite of a verbal altercation between the PA minister and a member of the audience that created temporary chaos in the large hall and eventually resulted in the minister’s departure from the conference, this experience in popular democracy in itself underscored the importance of freedom of expression, respect for difference of opinion, and holding officials to account in everything related to citizens concerns, especially those pertaining to national rights and ways to defend them.

At the end of the conference the hundreds of participants split into concurrent sector-based workshops that culminated many preparatory workshops held in few months leading to the Fourth National BDS Conference. Effective sector-based, one-year BDS action plans were drawn and follow-up teams were formed in the 9 parallel workshops. It is worth mentioning that the General Union of the Palestinian Women was the most active member of the BNC in organizing preparatory workshops prior to the conference — it held 7 such workshops in the different governorates in the occupied West Bank and Gaza.

The Fourth National BDS Conference was by far the most successful BDS event to be held in Palestine. While there remains much to do, the BNC is hopeful that the conference will significantly contribute to enhancing grassroots BDS activism among Palestinians everywhere and setting the stage for the long-awaited take-off of BDS campaigning in the Arab world.