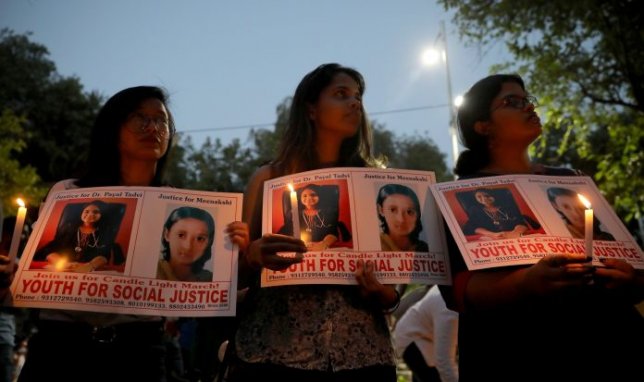 Public Statement on the Suicide of Dr Payal Tadvi in Mumbai

Dr Payal Tadvi, an Adivasi Muslim from one of the most backward tribes of India committed suicide on 22 May in her hostel room in a Mumbai hospital. She was a post-graduate resident doctor in the hospital. Many times before her suicide her mother and husband had given written representations to the hospital authorities about the harassment she had been facing from three of her seniors. According to these complaints her harassers were using casteist abuses and publicly humiliating her. However, the hospital took no administrative actions. After her death the hospital’s anti-ragging committee has reportedly found evidence of harassment, and according to some newspaper report the police have found evidence of derogatory casteist remarks.

Dr Payal Tadvi’s suicide immediately brings to mind the suicide by Rohith Vemula in 2015, a PhD scholar at the Hyderabad Central University. Rohith was a student activist. His organisation had been protesting against the HCU administration for months before his suicide. Even ministers of the BJP central government had enquired if his organisation had been adequately punished by the university administration after it was involved in a physical brawl with activists of the ABVP, the student organisation allied with the ruling party. If the context of Rohith’s suicide was institutional victimisation of radical dalit youth, Payal’s suicide throws open a window to the intimate cruelties suffered by the people of deprived backgrounds every day. According to her mother when Payal moved in the hospital hostel, the only cot in the room was already taken by one of her alleged harassers. Her room-mate, also a doctor would wipe her feet on the mattress on which Payal slept. Payal was a trained doctor. She had worked in a primary health center for a year. Yet her modern professional status could not shield her from what she had to go through. She narrated incidences of her humiliation only to her immediate family members. They complained to authorities when they felt she was under serious stress. She died alone, without leaving any suicide note.

Even seventy years after independence, and a constitution that promises a life of dignity to every citizen, Dalits, adivasis, and minorities in India continue to suffer multiple humiliations in their everyday lives. Appropriate legal provisions are in place. Institutional motivation to implement these provisions is woefully lacking, as shown in Payal’s case. However, even if institutional mechanisms were in place, these can play a role only after a dalit or an Adivasi has been humiliated, or suffered an assault. Indians need to identify and root out the conditions which make many of them abusers and haters of people from deprived backgrounds.

Indian society remains a deeply hierarchical and divided society. Its public sphere, in which people are supposed to be able to interact with each other without distinctions, is also stamped with hierarchy, so that there is little respect for a human being for just being a person. The normalcy of this public is dominated by people from privileged backgrounds. People from deprived backgrounds always feel marked in this sphere. Numerous writings by Dalit and Adivasi authors bring it out in painful detail. In educational institutions and work environments they are permanently stamped with the ‘reservation’ category tag. Most of them are first generation learners from poor families. They get to join these institutions and places of work after numerous hurdles, but their individual talents are little recognised. Increasingly, Muslims of our country are also being made to feel the same way.

Institutions of higher learning and government offices reek of a nefarious discourse on ‘merit’ of the ‘general’ category. This ‘merit’ is supposed to be measured by marks in entrance exams. But how does one compare the abilities of a dalit young woman from a rural landless family, who spent half her time on family chores, went to a dilapidated village school, and still got admission to an institution of higher learning, with another person whose upper middle class urban parents gave him/her education in expensive private schools, provided comfortable learning environment at home, and paid for extra tuitions and coaching? Why should only one of them be considered ‘meritorious’? Why cannot they interact freely in an environment of mutual respect?

The policy of reservation in jobs and educational institutions is often cited as the chief culprit, as if without this policy these places will be republics of merit. The drafting committee of India’s constitution under the leadership of Dr. Ambedkar adopted reservations as a policy of affirmative action after serious debate. Reservations have been continued and extended by democratically elected governments. Citizens have a right to criticize any government policy, or law. However, no one has a right to humiliate and abuse anyone, and any effort to show these as ‘reactions’ to a state policy is pure hypocrisy. These are acts of aggression and violence against people who are vulnerable due to their deprived backgrounds.

PADS calls upon the people of India to seriously question why so many of them are haters and abusers of people from deprived backgrounds. Why do people who abuse and commit hate crimes think they can get away with it? It is evident that the anti-caste movements have only partially succeeded in democratising India. The main reason is that the task of making India a democratic society has never been undertaken by the overwhelming majority of Indians. Until this happens India will continue to humiliate and harass people from deprived backgrounds, and destroy bright and sensitive men and women like Rohith and Payal.