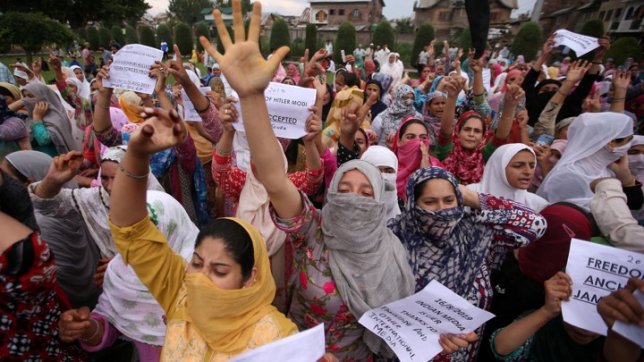 As August 5 this year marks the third anniversary of the reading down of the Article 370 and the partition of J&K, Pakistan India Peoples’ Forum for Peace & Democracy (PIPFPD) expressed solidarity with people of Jammu & Kashmir.

The PIPFPD Secretariat issued a comprehensive statement as well as a brief analytical report to highlight the nature of damage that has been done to the state after the revocation of Article 370.

The Forum demanded the Indian Government to:

1. End the regime of detention and incarceration of socio-political activists. We demand an immediate release of all political prisoners 2. Immediately stop the land grab unleashed on J&K by Indian government – ranging from the Srinagar Master Plan, the new land policy, the declaration of strategic areas and the mining bids being given away to non-locals. 3. Stop using the media and journalists as buffer in the conflict zone and allow free media. Indian government must stop terrorising the journalists and media houses. Put an end to all efforts at shutting down Kashmiri media houses, and taking over of press institutions 4. Restore statehood of Jammu & Kashmir 5. Immediately re-start political negotiations with J&K based political parties and groups and hold elections 6. Resume diplomatic dialogue with Pakistan, including on Kashmir issue, with a view to finding solutions and empowering peace over war 7. Stop terrorising civil society and human rights defenders of Jammu & Kashmir 8. Allow people-to-people dialogue to take place between the people of Kashmir on both sides. Issuing visas for divided families and people is an important step towards empowering people 9. Re-open the trade routes through Jammu & Kashmir, to save the local economy of J&K from a complete collapse 10. Allow free and effective functioning of all educational institutions – end occupation of educational spaces by the security forces 11. End the misuse of draconian, anti-democratic legislations like PSA and UAPA in J&K 12. Allow healthcare professionals, including doctors and nurses to do their job, without being terrorised by armed forces 13. Allow the courts to address the serious constitutional and fundamental rights questions raised before the Supreme Court of India and other courts in J&K.

According to the statement,

“The Indian parliament passed the J&K Re-organisation Act on August 5, 2019, de-operationalising Article 370, ending Jammu & Kashmir’s special status and partitioning the erstwhile state into two Union Territories of Ladakh and J&K. Soon after, Jammu & Kashmir’s political and geographical status was changed by imposing massive restrictions on the people of Jammu & Kashmir with several months under Section 144 of CrPC, curfew like situation and enhanced militarization, besides slapping the world’s most stringent and longest communication shut down. The Indian Prime Minister Narendra Modi justified the actions in the name of ending corruption and terrorism as also ushering in a new era of development, democracy, peace and equality. Three years since, it is important to assess whether the Indian government has been able to meet the tall claims it made.

Last month, Union Home Minister, Amit Shah, claimed that the J&K administration has been able to achieve a decisive upper hand over terrorism. However, the claims made are far from the ground reality in Kashmir, which appears to be tucked away beneath a veneer of silence and the propaganda of normalcy being created by the government and its loyalist media.

In reality, the former state of Jammu & Kashmir has become a more complex disputed conflict than before Aug 5th, 2019. Normalcy is being claimed on the basis of the number of militants killed in the last three years.

According to latest official data, since January 2019, at least 690 militants have been killed across J&K. During the same period, records show, 149 security personnel and 57 J&K Police personnel lost their lives.

At present, police records state that 129 active militants are present in the region. Statistical data on militancy and terrorism is neither indicative of any major change, nor does it take into account the new patterns of militancy related violence or the modus operandi of militant groups.

This statistical data does not take into account the increased incidents of militancy spreading from South Kashmir to other districts of Kashmir Valley and also to Chenab Valley and Rajouri-Poonch, where militancy had almost fully disappeared in the decade of 2000s.

It also does not take into account the rising cases of casualties of ordinary civilians including minority community members and non-J&K residents since 2019.

It is pertinent to point out that after 1991, barring four infamous massacres, killings of minority community members in Kashmir Valley were rare.

According to latest media reports, 24 civilians including 6 minority community members have been killed by armed militia in 2022 till July end. Media reports also pointed out that security officers are worried that tackling the new wave of militancy is becoming difficult in view of the fact that it is ‘faceless’, ‘leaderless’ and is attracting a large section of the young and vulnerable youth, many of them in their teens. They are difficult to be tracked and the arms availability a cause of great worry. A report in the Business Standard also pointed out to the new trend of Islamic State, for the first time, claiming responsibility for an act of arson.

The present escalation in militancy is alarming and has lead to increasing sense of insecurity and fear – both among the minorities and the majority, who face the dual wrath of the armed militants and the state security agencies.

The random arrests, routine crackdowns, raids by security forces and the NIA, slapping of anti-terror laws against civilians including academics, lawyers, businessmen, media-persons and social activists with little or no juridical remedies, have further added to the vulnerability of the common people.

Journalists like Aasif Sultan, Sajad Gul and Editor of news portal Kashmir Walla, Fahad Shah, continue to be incarcerated under the draconian provisions of the Public Safety Act even after they were granted bail by the courts.

Noted human rights defender, Khurram Parvez, who has tirelessly worked in the last two decades, raising his voice against human rights violations from all sides and for strengthening inter-community relations, is imprisoned in Delhi’s Tihar jail on fabricated charges of terror funding.

The civilians also face excesses in the form of daily instances of curfews, restrictions on movement, massive security drills, repeated internet and mobile phone shutdowns that impact their daily lives, their professional careers, business, economy, education and access to health-care.

Though tourism in 2022 has touched a new high, Kashmir Valley through the last three decades of strife has witnessed similar tourism rush off and on. Going by those inconsistencies and read along with the post-pandemic surge in people’s travel, tourism is not a considerable indicator of peace in the region.

The local economy has been adversely impacted by the seismic level alterations to land and development related laws that have reversed the gains of the land reforms and agrarian reforms of the 1950s and 70s respectively – which protected the individual’s right to their land holdings. The bid to woo investments by big business houses including in real estate has edged out the local investors, who are unable to compete.

Power generation projects owned by J&K government, minor minerals and precious mineral mines have been nationalised and transferred to central pool controlled by the Central government facilitating easy transfer of rights to non-J&K residents. New taxes include property taxes on rural and urban properties besides re-imposition of irrigation taxes are aimed at dis-empowering the people of J&K.

Besides huge tracts of state land and forest lands, apart from allowing conversion of agricultural lands, are being offered to big business lobbies from outside and state’s institutions at throw away prices, thus depriving locals of their resources and their land holdings, often with deleterious impact on the environment in this fragile Himalayan region.

Unfortunately, but deliberately so, these daily realities rarely make it to the public domain because all voices have been choked. Anyone, including media-persons, or socio-political activists or lawyers, critical of the Indian Government’s policies and actions, are targeted, intimidated and even jailed for raising their voices.

The media has been virtually silenced by choking the revenue of local newspapers writing critically, issuing police summons to journalists reporting fairly and professionally, by eliminating all spaces of solidarity like the shutting down of the Kashmir Press Club in January 2022 and by introducing a draconian Media Policy in 2022, which empowers an official to arbitrarily decide what is anti-national or fake news.

Politically, the state has been demoted to a union territory, no elections have been held and a delimitation of assembly constituencies has been done in a way that overlooks public convenience, demography and geography but offers a clear advantage to BJP.

All opposition voices have been silenced with state’s institutions like Enforcement Directorate and Anti-Corruption Bureau framing cases against political leaders and others who dare to speak out. The fact remains that Indian Government is administering Jammu & Kashmir as an occupied territory, where democracy and elections have become collateral damage.

While the entire situation defies the claims of normalcy being made and are in contravention of Indian democracy and international humanitarian laws, a serious crisis is emerging with excessive levels of frustration and desperation pushing young men towards the gun and religious radicalization.

This, in consonance with the external factors, of the worsening situation – both the western (India-Pakistan borders and the continuing ceasefire violations) and the northern frontiers (Chinese incursions into Ladakh) of the country warn us of the impending dangers to the security and peace of not just Jammu and Kashmir but entire South Asian.

In light of these facts, it is important that the Indian government undertakes a course correction by doing some serious (and honest) introspection about the negative impacts of its actions on the people, the ecology and the socio-cultural fabric of the region. Denial of the conflict and crisis will no longer help in negating the reality of the aggravation of the problem.”