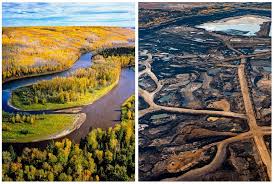 The construction of the Keystone pipeline and the exploitation of the Alberta oil sands mark a drastic change in Canadian environmental policy. Once an example of moral leadership on ozone, clean energy and sustainability matters, Canada is on it’s way to becoming a petro state.

Once a strong proponent of the Kyoto agreement, Canada shocked the world when it withdrew in 2012 under Stephen Harper, who described the agreement as “a socialist scheme”, and a “job-killing economy-destroying” accord. Canada’s growing dependence on petroleum has resulted in numerous environmental bills being killed, and existing environmental laws being dismantled. Anyone opposing the movement such as indigenous peoples and conservationists have been undermined and ignored.

In a controversial leaked document, the Harper administration wrote "To succeed we will need to pursue political relationships in tandem with economic interests even where political interests or values may not align." It would appear this new strategy is in full swing in regard to Canada’s oil deals with China.

Presently oil and gas count for a quarter of Canada’s export revenue, which is why the administration is so keen to silence any opponents. The government has stopped funding the Foundation for Climate and Atmospheric Sciences, dissolved the Environment Canada’s Adaptation to Climate Change Research Group, and fired the chief science advisor. Since 2008 the administration have blocked all media requests for the 23, 000 federal scientists.

When a government feels as though it must ignore and suppress scientific evidence opposing reliance on a notoriously volatile and unstable resource, citizens have reason to be concerned. Yet three quarters of Canadians support oil sand development. According to Foreign Policy’s Andrew Nikiforuk, this is because the Canadian government has spent $100 million on pro-oil ad campaigns convincing the public that exporting oil will lead to resource development. Furthermore the incentive of cheaper oil is a factor, as oil prices have increased five-fold over the past decade.

The Keystone XL pipeline is essential in achieving this goal. It will provide easy delivery to the United States, which is desperate for an oil-providing ally. However, the project, costing $5.5 billion, is estimated to increase carbon emissions by 935 million metric tons over a 50-year period.

On March 29 2013, Keystone XL faced one of what will certainly be many mishaps with an oil spill in Mayflower Arkansas. In this scenario access to the site was forbidden to journalist, and both the US and Canadian government have made efforts to hush up the incident.

While the oil revenue will undoubtedly boost Canada’s economy, it is time for the public to reflect on what they are willing to risk, and what kind of state they want to become.