Accueil > English > NEWS AND ANALYSIS > No Room To Say ‘No’ 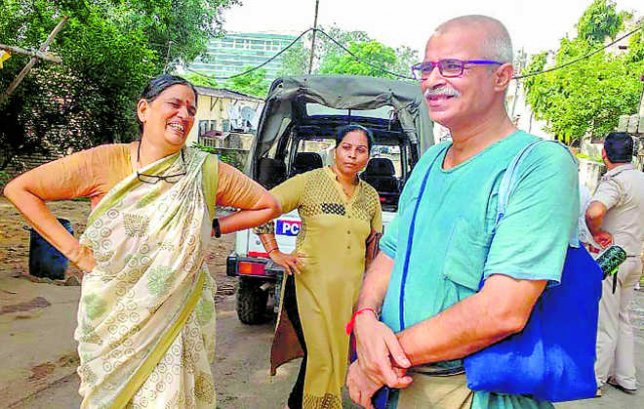 The coordinated action in many cities of India on August 28 to arrest rights activists marks a qualitative scaling up of attack on human rights and democracy. States all over the world dislike critics and dissidents because such dissenters bring to light many misdeeds of those who control and misuse power. The dissemination of knowledge about State’s misdeeds empowers those who are adversely affected by the actions of the State. Such empowerment is especially of critical importance in strengthening democracy in developing societies, where there is a significant cultural and educational gap between the rulers and the ruled. Rights defenders and democracy activists thus become intermediaries between the State and the powerless masses by siding with the masses.

The sporadic attacks on human rights, civil liberties and democracy have been a constant feature of the Indian republic but a systemic onslaught took place during the Emergency rule of Indira Gandhi. The latest crackdown will go down as the second most extensive attack on rights, although in intensity, the 1984 and the 2002 riots mark the darkest spots in the history of post-colonial India. The guilty have not been brought to book, and this impunity adds to the lurking dangers behind the August 28 arrests.

Among the arrested, the names of five individuals that have featured prominently are : Sudha Bharadwaj, a lawyer-cum-trade unionist ; Gautam Navlakha, a journalist and civil liberties activist ; Varavara Rao, a radical poet and intellectual ; Vernon Gonsalves, a rights lawyer, and Arun Ferreira, a rights activist and lawyer.

I know Sudha Bharadwaj and Gautam Navlakha ; have reviewed books by Varavara Rao, and have some knowledge, though limited, of the work of Gonsalves and Ferreira.

I know Sudha since her childhood. She is the daughter of the late Prof Krishna Bharadwaj, who was my research supervisor at JNU and the founder of JNU’s Centre for Economic Studies and Planning. Professor Bharadwaj was an internationally known historian of economic thought who worked at Cambridge University with Piero Sraffa, one of the most distinguished theoretical economists of the 20th century. Sudha was a school student when she would sometimes participate in the discussions between Prof Bharadwaj and me and make observations reflecting a sharp sensitivity to socio-economic issues. I had thought that she would also become an economist because she could easily get a scholarship for doctoral work at one of the leading universities in the Western world, but she decided to devote her talents to defend the workers’ rights by participating in trade union work and trained herself as a lawyer specialising in labour laws. She chose to work in Chhattisgarh, one of the most underdeveloped regions of India. A good society should be proud of such young people who choose to abandon the life of privilege and devote themselves to defending those who are the most vulnerable.

The big corporate interests want to have unquestioned access to exploit the human and rich natural resources of regions such as Chhattisgarh. The legal expertise and moral commitment of people like Sudha is a hurdle to the exploitative designs of corporate capital. To what extent the corporate capital can go to pursue its goals can be judged by the fact that Shankar Guha Niyogi, who founded the Chhattisgarh Mukti Morcha (CMM), a labour union, was killed in 1991. Sudha has been working with the CMM and defending Adivasis, Dalits and Christians in areas under attack from Hindutva activists. Her arrest is to terrorise activists like her who defend the defenceless and extend the space for assertion of democracy.

Gautam Navlakha has done sterling work on defending civil liberties. For years he has reported in Economic and Political Weekly, internationally the most respected social science journal from India, the results of his enquiries on rights violations in Kashmir and areas where the Adivasis have been resisting the encroachment of corporate capital. Prof David Harvey, Marxist geographer, has theorised this form of exploitation as ‘accumulation by dispossession’ where the original owners of the natural resources are dispossessed to enable corporate control of these resources. The role of violence facilitated by State power in this strategy leads to extensive rights violations. Attempt to silence the critics of such dispossession strategies is behind the arrest of Navlakha.

Varavara Rao, a popular Telugu poet, has been an inspiring figure in the struggle for the defence of the most exploited sections of society. He has also edited an excellent book on the struggles of nationalities in different regions of India. That a regime can fear even a poet, who is 77, to the extent that it decides to arrest him shows both the vulnerability and the meanness of the regime.

Both Gonsalves and Ferreira have been providing legal assistance to social and political activists. When a regime starts arresting even the lawyers defending political opponents of the State, it is a sign that it is entering a qualitatively new and higher level of repression of legal and democratic rights.

The attack on rights activists may further shrink the democratic space in India, but it is equally probable that it may provoke a backlash against the increasing authoritarian tendencies of this regime. Irrespective of the domestic response, internationally this crackdown on lawyers, journalists and poets will certainly further tarnish the image of this regime.