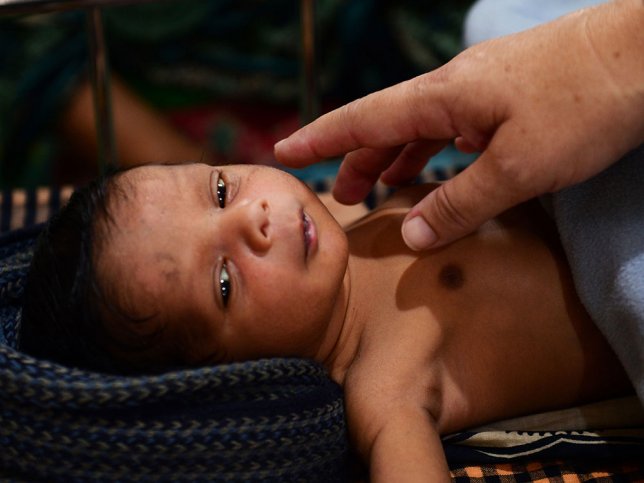 Nine months since the violent attacks of Aug. 25, 2017, the first of thousands of pregnancies as a result of rape are coming to term

Nine months since the violent attacks of Aug. 25, 2017, and thereafter forced 700,000 Rohingya to flee to neighbouring Bangladesh, the first of thousands of pregnancies as a result of rape are coming to term.

For these women and girls, the ongoing crisis is inescapably urgent. The imminent births won’t wait. Humanitarian organizations are exasperated by the inadequacy of responses to date. The foreseeable monsoon season is approaching and the already traumatized women and girls lack obstetric or gynecological care. Half of the refugee settlements still lack basic clinical services, so safe births of any kind present a challenge. There are concerns about possible infanticide as the conditions, suffering and implications overwhelm the refugees.

Safe births of any kind present a challenge

The problem is not limited to a handful of cases or to those from certain places. The cases of rape — often gang-rape by Myanmar soldiers — number in the many thousands and from across the Rohingya homeland. This was systematic and widespread. The resulting pregnancies, in addition to testimonies and remaining physical scars, provide the evidence.

The jarring report “Rape By Command” (Kaladan Press, 2018) sets out what happened according to victim testimonies from the camps. Even young girls were raped, some in front of parents, sometimes left for dead. The scale of sexual violence was obviously pursuant to a plan with unmistakable purpose. The matter has been addressed before the UN Security Council, and received widespread condemnation from the UN Secretary-General, governments and international civil society.

“Genocidal rape” or “rape as a weapon of genocide” is known from other situations, and has been internationally adjudicated, including the crime of “forced impregnation” which was, for example, a part of the strategy of dominance and conquest perpetrated by Serb forces in Bosnia-Herzegovina in the early 1990s. “Genocidal rape” was also committed in Rwanda in 1994 according to the International Criminal Tribunal for Rwanda. The character of the crime is especially heinous because of the uniquely lasting consequences — including children born of the attacks.

In this light, it is perplexing that the international community, including Canada, hesitates to name the crime. There is no shortage of evidence — testimonial, documentary and physical. Are we unsure what has happened or who is responsible? Are we unsure what is genocide?

It is perplexing that the international community, including Canada, hesitates to name the crime

At the time of the Holocaust, there was not yet a name for the crime or an international standard to apply. That changed with adoption of the 1948 Convention on the Prevention and Punishment of the Crime of Genocide, which Lester B. Pearson signed on behalf of Canada in 1949 (and Burma/Myanmar ratified in 1956). At least for the 149 parties to the convention, the law is clear.

“Genocide” is defined in Article 2 of the Convention as specified “acts committed with intent to destroy, in whole or in part, a national, ethnical, racial or religious group, as such” including: killings; causing serious bodily or mental harm; inflicting conditions of life calculated to bring about destruction of the group in whole or in part; preventing births; or forcibly transferring children of the group to another group.

Even a cursory review of the situation of the Rohingya makes clear that most if not all of the acts of genocide have occurred. And it is impossible for Myanmar to deny its own responsibility for the composite of its policies, laws, programs, practices, positions and statements that constitute the general and specific conduct that is the genocide. Myanmar has more than just failed to prevent or punish the acts proscribed under the Genocide Convention, but it has commissioned them by its laws and by the acts of its agents (primarily, but not exclusively, the military).

Matters of genocide demand clarity of mind, position and expression. We must know it when we see it and we must name it. That is the clear lesson of history. It is arguably the minimum of good faith for States Parties to the 1948 Convention, Canada included.

As a matter of general international law, the standard for naming genocide is “reasonable certainty.” Today there is abundant evidence, amounting to or surpassing reasonable certainty, establishing genocide committed by Myanmar against the Rohingya. We see it with our very eyes. It exists in part in the babies now being born in the Bangladeshi camps.

Myanmar is responsible — by its acts and omissions — for what has happened and is still happening. And only Myanmar can change its policies, laws and practices as well as its statements. But Canada and its allies should have no doubt that the now forcibly pregnant women and girls in the Bangladeshi camps are victims of genocide. We need to call this campaign of rape and slaughter what it is, and act accordingly.

John Packer is the Neuberger-Jesin professor of international conflict resolution at the University of Ottawa.