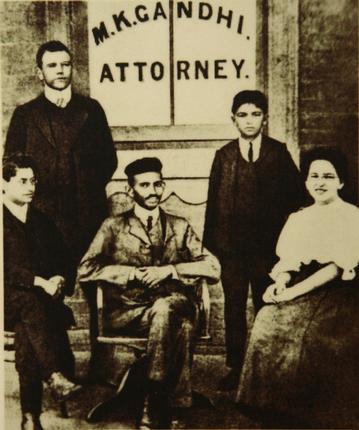 The popular legend of Gandhi in South Africa has a backstory, that of a man with fawning loyalty to the British.

There is a backstory to the legend of Mahatma Gandhi, enacted in South Africa, and told in large part in the glow of reverence that envelops him in nationalist historiography. Further embellishments were added since South Africa’s liberation from decades of white racist rule, when the bonds established by Gandhi’s supposedly unflinching commitment to equality, became the substratum of its diplomatic bonding with India.

It is an appealing story, but fails every basic test of authenticity. In The South African Gandhi: Stretcher-Bearer of Empire, Ashwin Desai and Goolam Vahed use, for the most part, their subject’s own locutions to establish a different persona. They do not have to delve very deep to lay bare Gandhi’s fawning loyalty to the British empire and his naive belief in its commitment to fair play. This fealty to the white man’s empire was inflected with a conspicuous sense of disdain towards the native African, whose supposed moral incapacity made him an undeserving claimant for equal rights.

These political attitudes would have swiftly been rendered irrelevant had Gandhi not rode the crest of colonial history. When the British empire collided with Boer nationalism, he volunteered as a loyal subject of the queen, to serve the war effort.

When Brit made peace with Boer, he lobbied unsuccessfully for parity in political rights for the Indian trader and professional. The native African and the indentured Indian remained peripheral to his vision. When the Zulu rose up against white settler expropriation of his homeland, Gandhi rushed to battle in the cause of the empire, reprising his Boer war role in the army ambulance corps. The British suffered few casualties, while the Zulus, who were killed in the thousands and herded in larger numbers into concentration camps, earned little of his sympathy.

Bitter disillusionment followed with British capital and Boer nationalism ceasing their hostilities to create a new union based on white supremacy and shared plunder of the land. It was in this interlude of disappointment that Gandhi wrote his anti-modernist manifesto, Hind Swaraj. Written in the frustration of defeat, Gandhi was to insist to his last days that Hind Swaraj was his most complete political testament.

An illusory triumph came when the British governor-general Lord Gladstone and Boer prime minister Jan Smuts sought to tighten the structures of white supremacy with extortionate taxes and oppressive restraints on Indian and native African alike. Imprisoned at an early stage in the agitation that followed, Gandhi acquired a certain mystique in the perception of both Indian and African, even as they took their protests in directions he would never have endorsed.

The burgeoning violence and unrest stirred anxieties in Delhi, the newly established viceregal capital of the British empire. Already perturbed by the turn towards violent resistance in India, the British viceroy urged a fair settlement. Seemingly delighted at the attention of the imperial masters, Gandhi caved in, managing to portray as a triumph a deal that left intact the foundations of a formal regime of racism.

Gandhi did not stay behind to experience at first-hand the consequences of his deal with Smuts. He had shed the vestments of the British barrister for the loincloth and tunic favoured by the indentured worker. That transformation was to be carried radically forward after his return to India. From then on, it was part of his personality to try and embody — in the sartorial, culinary and every other sense — the life and aspirations of the poorest Indian.

Could Gandhi’s subsequent political trajectory be linked with the arc traced in South Africa? Desai and Vahed show how his early moves since returning to India followed an established loyalist pattern. World War I saw him stepping up eagerly to volunteer for the British war effort, and when the empire was threatened with disintegration in 1918, he declared his willingness — to the dismay of pacifist European associates from South Africa — to bear arms for the imperial cause.

In 1958, the Marxist politician and theoretician EMS Namboodiripad published a pioneering assessment of Gandhi’s politics, titled The Mahatma and the Ism. ‘EMS’ as he was known, pointed out how, even after the Jallianwala Bagh massacre of 1919, Gandhi remained torn between his revulsion at the crimes of the empire and his belief in British fair play. He waffled and vacillated as mass discontent spread, only making up his mind when General Reginald Dyer, the commanding officer responsible for Jallianwala Bagh, was accorded an effusive public reaction on his return to Britain. It was then that he issued his famous diktat that any form of cooperation with the ‘satanic’ colonial regime was a mortal sin.

It was the beginning of successive waves of political unrest that unsettled the empire, leading to its final demise in 1947. Gandhi sought at every stage to stay on the right side of the public mood and contain it in a fashion that would maintain order. At various stages, he proved incapable of coping with the complexities of caste and community unleashed in the struggle. He seemed explicitly to repudiate early claims of Aryan descent that made the Indian a superior being, since the consequences of clinging to that bit of hokum would have been deeply alienating. Affect rather than reason or history would prove his main weapon in all struggles. And he was to suffer many more bitter disappointments, of greater proportions than those South Africa handed him. In all that he remained, as the British historian Judith Brown has aptly said, a “prisoner of hope”. That perhaps is his final legacy as an icon of national liberation.