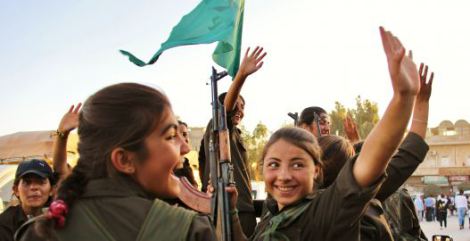 Kurds and Allies Demonstrate for the Rojava Revolution

On Sunday 1st November, on the day of Turkish elections and World Kobane Day, some sixty of us demonstrated in Phillips Square in solidarity with the Kurdish Freedom Movement and Syrian refugees. This demonstration was organized by the new organization Rojava Solidarity Montreal together with La Foundation kurde du Québec as well as some Vermonters. The Kurds are the biggest stateless population in the world, divided across Turkey, Iraq, Iran and Syria, and their history has been invariably plagued by oppression. Many have fled such conditions and some, such as the ones there on Sunday, now live in Montreal.

We had a magnificent demonstration, Kurds and non-Kurds standing together with flags and placards, dancing to Kurdish music and listening to megaphone speeches in full view of rue St. Catherine. We gave out leaflets and raised $317 for the reconstruction of the heroic, yet destroyed, city of Kobane. It was a day of joy in spite of the difficult issues it dealt with, especially on a day of Turkish elections whose disturbing outcome was that the megalomaniacal President Erdogan would further consolidate his power.

Why did we demonstrate? What is Kobane and what is the Rojava Revolution?

The world watched in horror last autumn as the ruthless Islamic State (commonly referred to as ISIS) marched on the strategic border city of Kobane in Kurdish-majority northern Syria (a region known as Rojava). No one expected the city to survive the attack. But it did. Democratic mixed-gender militias with small arms held one of the most feared armies in the world at bay. The smoke cleared, and Kobane still stood.

The militias who held the city were fighting for their lives and their land. But even more than that, they were fighting to defend their revolution: the Rojava Revolution. When the Assad regime began to fall, Kurds and other ethnic minorities in northern Syria carved out pockets of liberty and began to establish a new society. You wouldn’t know it from the headlines, but amidst the devastating fall of Syria has emerged one of the greatest social experiments the world has ever seen.

They have created an autonomous society free of any state control, based on decentralized grassroots democracy through local neighbourhood councils and cooperatives; there are no taxes or repressive police force and everything is run by direct democracy and citizen participation.

Furthermore, feminism is championed by enforcing gender parity in all leadership positions and allowing for women-only councils with veto power. That women have a significant role in every level of society is the legacy of a decades-long outspoken feminist current on the Kurdish Left.

This is also a diverse, secular revolution in a region famous for its mosaic of ethnicities, languages, and religions, many of which are very ancient or unique to the region. Kurds live in harmony with Arabs, Assyrians, Armenians and Turkmen, as do Muslims with Christians, Zoroastrians, Yezidis and atheists. Then there is the legendary rescue of the Yezidis; targeted by ISIS as a religious minority, they fled into the mountains where they were stranded, surrounded by ISIS and dying of thirst, hunger and cold, until they were rescued by Kurdish militias.

Where did these revolutionary values come from? For decades, the Kurdish Worker’s Party (PKK), the exemplar of Kurdish leftist and national liberation movements, pursued a rigid Marxist-Leninist dogma, unending violent warfare and the vision of attaining an independent Kurdish state. Stuck in an aporia, as has much of the authoritarian Left, it was a moment that urgently required rethinking. When the revered PKK leader, Abdullah Oçalan, was captured by Turkey and placed on a high-security island, he began to read. He was searching for new and more relevant ideas on the Left. Among others, he encountered the writings of Murray Bookchin, the US eco-anarchist and exceptional thinker who founded social ecology. Bookchin’s utopian ideas of Communalism inspired Oçalan’s program of Democratic Confederalism: anti-capitalism based on decentralized local citizen assemblies, feminism and diversity, values now being implemented in the Rojava Revolution.

It is these things which have inspired ’Rojava Solidarity Montreal’, a small and young though ambitious grouping of anti-authoritarians that admire and support the audacious and visionary, though precarious, Rojava Revolution. We have heard it described as the: "most important social strike in the world." We believe that Rojava is an example of a free society based on solidarity just as was the Spanish Revolution, where workers and peasants overthrew the rule of state and capital and instead self-managed industry and farms through egalitarian cooperatives.

Rojava Solidarity Montreal can be found as a group on Facebook or contacted at nathan@blackrosebooks.com.

This week, the new biography Oxford University Press biography of Murray Bookchin will be launched in Montreal. It will be three early evenings of events on Tuesday (6pm, Mcgill Leacock Room 232), Wednesday (5pm, the Urban Ecology Centre) and Thursday (5 pm, organised by GRIP-UQAM, with translation technology to French, at room N-M510). The book launches will be attended by the author Janet Biehl, a Vermonter who closely follows the Rojava Revolution at www.biehlonbookchin.com.