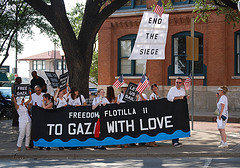 Israel has announced that its navy will attempt to stop two boats carrying pro-Palestinian activists bound for the Gaza Strip, in the latest attempt by activists to break the four-year Israeli blockade against the territory.

The Israeli military spokesman’s office said the country’s navy was "prepared to contact" the vessels and had "completed the necessary preparations in order to prevent them from reaching the Gaza Strip".

The Canadian boat Tahrir and the Irish boat MV Saoirse left the port of Fethiye in southwest Turkey on Wednesday after Turkish authorities gave them permission to sail to the Greek island of Rhodes.