Home > English > NEWS AND ANALYSIS > Is Israel Guilty of Genocide in Its Assault on Gaza? 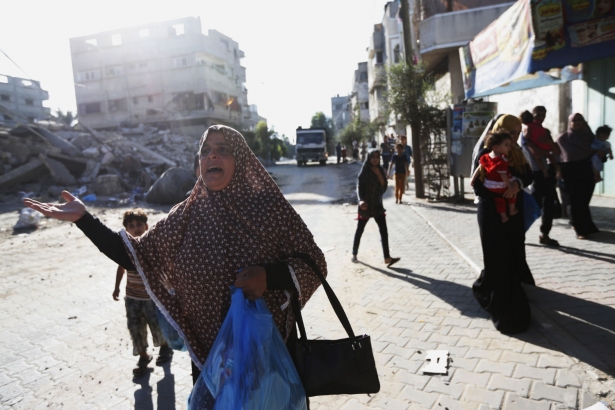 Is Israel Guilty of Genocide in Its Assault on Gaza?

The Russell Tribunal on Palestine, inspired by the 1967 inquiry into American war crimes in Vietnam, examined the case.

On September 24, a special session of the Russell Tribunal critically scrutinized Israel’s summer assault on Gaza, Operation Protective Edge, from the perspective of international law, including the core allegation of genocide. The process involved a series of testimonies by legal and weapons experts, health workers, journalists and others, some of whom directly experienced the fifty days of military assault.

A jury composed of prominent individuals from around the world, known for their moral engagement with issues of the day, assessed the evidence with the help of an expert legal team of volunteers that helped with the preparation of the findings and analysis for consideration by the jury, which deliberated and debated all the issues raised—above all, the question of how to respond to the charge of genocide.

The Russell Tribunal on Palestine was inspired by the original Russell Tribunal, which was held in 1967 at the height of the Vietnam War. Convened by the great English philosopher Bertrand Russell and presided over by Jean-Paul Sartre, those original sessions assessed charges of war crimes committed by the United States in Vietnam. Subsequent tribunals included the Russell Tribunal on Latin America, which investigated the military dictatorships in Argentina, Brazil and Chile. The first Russell Tribunal proceedings on Palestine, convened in the wake of Israel’s 2008–09 assault on Gaza, were held in four sessions, from 2010 to 2012.

It should be acknowledged that this latest undertaking was never intended to be a neutral inquiry without any predispositions. The tribunal was held because of the enormity of the devastation and the spectacle of horror associated with high-technology weaponry attacking the civilian population of Gaza, which was locked into a combat zone that left no place to hide. The tribunal was also a response to the failures of the international community to do more to stop the carnage, or even to condemn Israel’s disproportionate uses of force against an essentially helpless civilian population that included the targeting of a variety of legally forbidden targets, among them UN buildings used as shelters, residential neighborhoods, hospitals and clinics, and mosques.

Although the tribunal proceeded from the assumption that Israel was responsible for severe wrongdoing, it made every effort to be scrupulous in the presentation of evidence and the interpretation of applicable international law, and relied on testimony from people with established reputations for integrity and conscience. Among the highlights of the testimony were a report on damage to hospitals and clinics given by Dr. Mads Gilbert, a Norwegian doctor serving in a Gaza hospital during the attacks; Mohammed Omer, a widely respected Gazan journalist who daily reported from the combat zone; Max Blumenthal, a prize-winning journalist who was in Gaza throughout Protective Edge and analyzed for the jury the overall political design that appeared to explain the civilian targeting patterns; and David Sheen, who reported in agonizing detail on the racist hatred expressed by prominent Israelis during the assault, which was widely echoed by Israelis in the social media and never repudiated by the leadership in Jerusalem.

The jury had little difficulty concluding that the pattern of attack, as well as the targeting, amounted to a series of war crimes that were aggravated by the commission of crimes against humanity. These included the imposition of collective punishment upon the entire civilian population of Gaza, in flagrant and sustained violation of Article 33 of the Fourth Geneva Convention. A further notable legal finding was the rejection of the central Israeli claim that it was acting in self-defense against rocket attacks from Gaza. There are several reasons for reaching this conclusion: under international law, the claim of self-defense cannot be used in justifying response to resistance mounted by an occupied people, and from the perspective of international law, Gaza remains occupied due to persisting Israeli control despite Israel’s purported “disengagement” in 2005 (more properly characterized as a military redeployment). The rockets fired from Gaza were at least partly a response to prior Israeli unlawful provocations, including the mass detention of several hundred people loosely associated with Hamas in the West Bank and the incitement to violence against Palestinians as revenge for the murder of three kidnapped Israeli settler children. And finally, the minimal damage done by the rockets—seven civilian deaths over the entire period—is too small a security threat to qualify as an “armed attack,” as is required by the UN Charter to uphold a claim of self-defense. At the same time, the jury did not doubt that rocket fire by Palestinian militants into Israel was unlawful, as the rockets were incapable of distinguishing between military and civilian targets.

Much of the concern in the jury deliberations before and after the proceedings themselves was how to address the allegation of genocide, which has been described as “the crime of crimes.” The jury was sensitive to the differences between the popular and political uses of the word “genocide,” to describe various forms of collective violence directed at ethnic and religious minorities, and the more demanding legal definition of genocide, which requires compelling evidence of specific “intent to destroy.”

The testimony made this issue complex and sensitive. It produced a consensus on the jury that the evidence was sufficient to make it appropriate to give careful consideration as to whether the crime of genocide had actually been committed by Israel. This was itself an acknowledgment that there was a genocidal atmosphere in Israel, in which high-level officials made statements supporting the destruction or elimination of the Gazans as a people. Such inflammatory assertions were at no time repudiated by the leadership of Prime Minister Benjamin Netanyahu or subject to criminal investigation, let alone any other official proceedings. Furthermore, the sustained bombardment of Gaza, under circumstances where the population had no opportunity to leave or to seek sanctuary within the Gaza Strip, lent further credibility to the charge. The fact that Operation Protective Edge was the third large-scale, sustained military assault on this unlawfully blockaded, impoverished and endangered population also formed part of the larger genocidal context.

Despite these factors, there were legal doubts as to the crime itself. The political and military leaders of Israel never explicitly endorsed the pursuit of genocidal goals, and they purported to seek a ceasefire during the military campaign. The tribunal convincingly documented the government’s goal of intensifying the regime of collective punishment, but there was no clear official expression of intent to commit genocide. The presence of genocidal behavior and language, even if used in government circles, is not by itself sufficient to conclude that Protective Edge, despite its enormity, amounted to the commission of the crime of genocide.

What the jury did agree upon, however, was that some Israeli citizens and leaders appear to have been guilty in several instances of the separate crime of incitement to genocide, which is specified in Article 3(c) of the Genocide Convention. It also agreed that the additional duty of Israel and other parties to prevent genocide, especially the United States and Europe, was definitely engaged by Israeli behavior. In this regard, the Russell Tribunal is sending an incriminating message of warning to Israel and an appeal to the UN and the international community to uphold the Genocide Convention, and to prevent any further behavior by Israel that would cross the line.

Many will react to this assessment of Protective Edge as without legal authority and dismiss it as merely recording the predictable views of a “kangaroo court.” Those allegations have been directed at the Russell Tribunal ever since its founding nearly fifty years ago. Bertrand Russell called the original proceedings a stand of citizens of conscience “against the crime of silence.” This latest session of the tribunal has a similar mission in relation to Israel’s actions in Gaza, although less against silence than indifference. Such tribunals, created almost always in exceptional circumstances and in response to defiance of the most elemental constraints of international law, make crucial contributions to public awareness—especially when geopolitical realities preclude established institutional procedures, such as recourse to the International Criminal Court and the UN Security Council and General Assembly.

When the interests of the West are at stake, as in Ukraine, there is no need to activate unofficial international law initiatives. However, in the case of Israel-Palestine, when the US government and most of Western Europe stand fully behind whatever Israel chooses to do, the need for an accounting is particularly urgent, even if the prospects for accountability are minimal. The long-suffering people of Gaza have endured three criminal assaults in the past six years, which have left virtually the entire population, especially young children, traumatized by the experience.

The Russell Tribunal is filling a normative vacuum in the world. It does not pretend to be a court. In fact, among its recommendations is a call on the Palestinian Authority to join the International Criminal Court and present its grievance to the authorities in The Hague for their investigation and possible indictments. Even then, prosecution will be impossible, as Israel is not a party to the treaty establishing the ICC and would certainly refuse to honor any arrest warrants issued in The Hague. A trial could not proceed without the physical presence of those accused. It is notable that Hamas has joined in urging recourse to the ICC despite the distinct possibility that allegations against its rocket fire would also be investigated and its officials could be indicted for alleged war crimes.

As with the Nuremberg judgment, which documented Nazi criminality but excluded any consideration of the crimes committed by the victors in World War II, the Russell Tribunal process was flawed and can be criticized as one-sided. At the same time, I am confident that, on balance, this assessment of Israel’s behavior toward the people of Gaza will support the long struggle to make the rule of law applicable to the strong as well as the weak.