Home > English > NEWS AND ANALYSIS > In Tahrir Square the anger is growing again. Where is the revolution the (...) 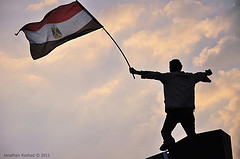 In Tahrir Square the anger is growing again. Where is the revolution the crowds fought for?

Mubarak may be gone, but the new order is floundering. In Cairo, Robert Fisk finds fury returning as people still demand change

Something has gone badly wrong with the Egyptian revolution. The ruling Supreme Council of the Armed Forces – just what the "Supreme" bit means is anyone’s guess – is toadying up to middle-aged Muslim Brothers and Salafists, the generals chatting to the pseudo-Islamists while the young, the liberal, poor and wealthy who brought down Hosni Mubarak are being ignored. The economy is collapsing. Anarchy creeps through the streets of Egyptian cities each night. Sectarianism flourishes in the darkness. The cops are going back to their dirty ways.

It really is that bad. You only have to walk the streets of Cairo to understand what’s gone wrong, to wander again across Tahrir Square and listen to those insisting on democracy and freedom as the old men of the Mubarak regime cling on as Prime Minister, under-ministers, in the very figure of Field Marshal Mohamed Tantawi, the head of that "supreme" council, childhood friend and Mubarak loyalist – even though he did force the old man to go. Tantawi’s equally elderly head is now framed in posters around Tahrir and the old January-February cry is back: "We want the end of the regime."