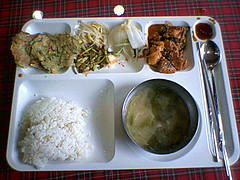 SEOUL, South Korea — Low turnout in South Korea’s first vote on a social policy on Wednesday left in place a Seoul program providing free lunches for 810,000 elementary and middle-school students, a victory for the liberal opposition, which had urged a boycott.

Though the voting, like the lunch program, was confined to the capital, it took on national proportions with all political parties joining the debate in a sign that, after decades of bickering over civil liberties, the economy and North Korea, they were now entering the unfamiliar field of social welfare.