Home > English > NEWS AND ANALYSIS > Hagia Sophia: From Museum to a Mosque-Times are a Changing 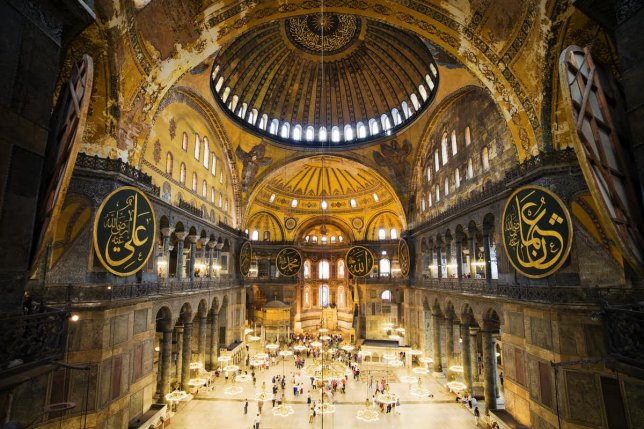 Hagia Sophia: From Museum to a Mosque-Times are a Changing

Last three decades have seen a drastic shift in the global political scenario. Earlier decades were marked by national liberation struggles; focus on the issues related to ‘this World’. Many a countries who came out from the grip of colonialism, under different banners gave primacy to industrialisation, education and agricultural growth. India, Vietnam, Cuba being some of those, which despite the remnants of fundamentalists, marched towards the states upholding the concerns of the struggling and deprived people of the countries, away from the stifling grip of politics in the name of religion. Of course there were some of the countries where the rulers allied with the clergy to keep alive the feudal norms, perpetuating the grip of backwardness. These had sectarian approach to their policies. Our two neighbours Pakistan and Myanmar do fall in this category.

From the decade of 1980s many factors contributed to the retreat of secular democratic forces and politics wearing the clothes of religion marched trampling the inclusive ethos, marginalising the welfare policies and giving a go by to development and progress as far as industrialisation and education is concerned. Last three decades in particular has seen the increasing hegemony of politics in the name of religion. Terminologies like Islamism, Hindutva, Christian fundamentalism, Buddhist fundamentalism have come to the fore, becoming more assertive and taking these countries down from the path development and worsening the lot of large sections of society.

Currently in US, Donald Trump is making subtle and overt appeal in the name of Christianity and Ashin Wirathu in Myanmar has been promoting violence in the name of Buddhism. Similar is the phenomena in Sri Lanka, where Wirathu’s clones are on the ascendance. In India the Hindutva has made massive strides. In Afghanistan, Al Qaeda Taliban has tormented West and Central Asia apart from Afghanistan itself. The most blatant expressions of these have been the mutilation of the idols of Lord Gautama Buddha in Afghanistan. Similarly demolition of Babri Mosque in Ayodhya is a painful chapter which was used as springboard by Hindu nationalists.

These are just visible symbols, while the socio economic impact has been dangerously retrograde, the status of rights as citizens, rights of minorities have suffered a severe setback at the same time. This does reflect the direction of global trend. Many slogans have been dominating the scene. Earlier the major propaganda from imperialist forces was ‘Free World versus authoritarian system (socialism)’, later in the aftermath of 9/11 the ruling phrase has been ‘Islamic terrorism’. Currently different fundamentalisms are ruling the roost, stifling the democratic ethos and undermining human rights in general.

It is in this background that conversion of Hagia Sophia from a museum to Mosque can be understood. Turkey was one of the major countries which under the leadership of Kemal Ataturk had embraced the path of secularism, overthrowing the Caliphate the carryover of Ottoman Empire. This Caliphate even had some approval from section of global Muslim community. Ataturk had unshakable commitment to secularism and Hagia Sophia, which initially was a Church and changed to a mosque in 15th Century was converted to a Museum, a space for all with equal and due respect. Erdogan, who has been at the forefront of power from last many years; has been gradually shifting to Islamism. Islamism is to Islam what Hindutva is to Hinduism or Christian fundamentalism is to Christianity. Erdogan rose in the power hierarchy from the competent mayor of Istanbul to later become Prime Minister of Turkey. After the initial years where he could deliver on economic front, he slipped into self adulation and power hunger kept him shifting the fulcrum of politics towards Islamic identity. The downslide in the condition of the citizens was pathetic and it also got reflected in Erdogan loosing the local body elections.

This is when his turn to Islamism has become more overt and this grand structure of Istambul, more or less the most important architectural symbol of Turkey, was converted in to a mosque. Sections of Muslims are celebrating this as ‘victory of Islam’. Other Muslims more committed to values and humanism of Islam; are severely critical of this move of Erdogan. They point out that there is no compulsion in Islam in matters of religion. (To you your religion, to me mines). This is in contrast to the popular belief that in India Islam spread on the point of sword.

These serious scholars of Islam also remind us that, at one point of time Prophet Mohammad even invited non Muslims to the mosque to offer their prayers. Of course each religion has multiple sub sects and multiple philosophies associated with each. Islam has the range of Shia, Sunni, Khoja, Bohra and Sufi with various legal streams like Hanafi, Hannabali etc. Christians, do have Catholics with few sub streams and Protestants again with many streams. Each claims to be the ‘real’ one. While perhaps what is real in the religions is the love and compassion for fellow human beings. Some aspects of religions are just a cover for lust of power. So we also see that some will approve Jihad, others will defend Crusades and yet another will uphold Dharm Yudh.

The turning of Hagia Sophia to a mosque has two dimensions, one of the losing popularity of Erdogan so resorting to populism of religion as a crutch to hold to power, and other is the impact of global rise of fundamentalism in many a countries. In 1920s Kemal Ataturk could take on the mighty institutions of ‘religion’ to introduce the secular policies on solid secular foundations. In turn of events during last many decades the fundamentalism has hit back. The main reasons have been the role of America in propping up Al Qaeda to counter the Russian army in Afghanistan and later decline of Soviet Union leading to emergence of America as sole super power for some time. America did proactively promote fundamentalism at multiple places. That set the ball rolling and gradual occupation of secular space by the language of religion. What we are witnessing in Turkey is yet example of this retrograde phenomenon.