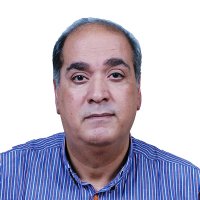 KATHMANDU - A newly elected President Refat Sabbah, the General Secretary of the Arab Coalition for Education for All (ACEA), takes the reins and leads the movement into a transformative, sustainable and just future to ensure strengthened collective efforts that hold governments accountable to free, quality public education worldwide.

“Throughout my life I have been immensely supported by my friends and colleagues, whom I consider as role models and who play a significant part in this growing movement. I will do my utmost best to bring us the just transition we all strive for. I will still need and rely on you all, to advise, guide and to promote the movement throughout your regions and national coalitions. I remain committed to serving you all and propelling the movement to the next level” said Refat Sabbah, President of the Global Campaign for Education.

Voted in on the 17th November at the 6th World Assembly, by an overwhelming majority, Sabbah will provide overall strategic direction for the next four years. Refat Sabbah brings a wealth of knowledge and experience. A lifelong human rights and education activist, he is the General Director and Founder of the Teacher Creativity Centre in Palestine, the Chair of the Arab Network for Civic Education (ANHRE), and served on the board of GCE since 2015. Refat also founded ACEA, which represents eleven national and three regional education coalitions across the Arabic-speaking world.

Over the years, the movement has been steered by incredible leaders, from Kailash Satyarthi the first President, to Camilla Croso who served for two mandates 2011 (re-elected in 2015). These crucial elections of both the President and Board Members determine the shape and direction of the movement for the next few years.

The coordinator of Campaña Latinoamericana por el Derecho a la Educación (CLADE) and outgoing President Camilla Croso added “serving as the President of this global, diverse movement has been both an honor and a pleasure. I wish to express my sincere gratitude for the collective commitment to economic, social and environmental justice as well as to human rights. In this World Assembly we confronted challenges and celebrated successes, yet we know that tangible actions are still required to ensure a truly transformed education system. I am proud to have stood and walked this journey with you all and now I leave you in the hands of Refat Sabaah to lead us into a future that ensures good quality, public education for all.”

During this 6th world assembly, the various GCE constituencies chose their new board members and board officers.

Mr Samuel Dembele (ANCEFA) was appointed Board chair. Samuel Dembélé is the president of the board of the African Network Campaign on Education for All (ANCEFA; since November 2015), president of the board of the Coalition Nationale de l’éducation pour Tous du Burkina Faso (CN-ÉPT BF; since April 2014) and secretary-general of the National Union of Teachers for Secondary and Higher Education (SNESS, Syndicat national des enseignants du secondaire et du supérieur; since 2010).

The sixth Global Campaign for Education (GCE) World Assembly convened from the 16th to 18th November 2018 under the theme “Transforming public education systems for equality, inclusion and justice” in Kathmandu, Nepal.

The Global Campaign for Education is a civil society movement that aims to end the global education crisis. The movement promotes and defends education as a basic human right.

Arab Campaign for Education for All (ACEA) is an independent, non-profit coalition, consisting of networks, coalitions, non-governmental organizations, community-based organizations, teachers’ unions, associations and other sectors interested in education in the Arab countries.

Palestinian Education Coalition (PEC) is its Palestinian civil institutional framework, working to pressure and influence on Polices in order to deliver a qualitative, free and compulsory education for Palestinian Children in accordance with the fourth goal of global development goals. This coalition consists of associations, federations, trade unions and committees, working together to reach a safe educational environment to enhance the national identity.