Home > English > NEWS AND ANALYSIS > Gaza Needs Action by the UN, Not Another Report 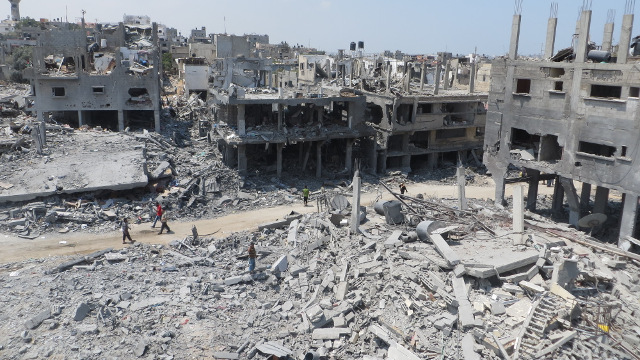 Gaza Needs Action by the UN, Not Another Report

A study was released Wednesday by the United Nations Country Team (UNCT) arguing that Gaza may be uninhabitable in five years if current economic conditions persist. The report described Israel’s devastating blockade and regular military assaults on Gaza, combined with the area’s high growth rate, as the major factors causing Gaza’s impending inviability.

Haidar Eid, professor at Al Aqsa University in Gaza and prominent BDS activist, was puzzled by the report’s preoccupation with the year 2020. Eid explained that the report’s information proves that “Gaza is already uninhabitable.”

A general response to the report in Gaza may be summed up with the phrase “this is nothing new”.

One conclusion that the UNCT report and Gazan activists do have in common, however, is the ineffectiveness of humanitarian aid. The UNCT report stated: “no amount of aid would have been sufficient to put any economy on a path of sustainable development under conditions of frequent military strikes and destruction of infrastructure, isolation from global markets, fragmentation of domestic markets and confiscation and denial of access to national natural resources.”

Amjad Shawa, director of Gaza’s Palestinian Non-governmental Organization (PNGO) network, agreed with this point, saying that while it is important to ease suffering, donors have given billions of dollars of aid to Gaza over the last 80 years and the situation has only deteriorated. Indeed, unemployment in Gaza is now at an all time high of 60 percent.

Aside from the report’s disillusionment with humanitarian aid, however, many feel the report is indicative of the international communities’ tendency to share information, to a fault.

Referencing a report on Gaza’s economy in 2020 written by the UNCT in 2012, Shawa explained, “the information is there, the warning is there, but [there is no] real action on the ground.” While many may be appreciative of UNCT efforts to disseminate this information, Gazans distinguish between providing descriptive information and committing to real action.

On the other hand, Eid does not see hope in this most recent report. Instead, he sees it reflecting the international communities’ widespread hesitation to hold Israel accountable for crimes against Palestinians. This is because while the report details shocking facts about life in Gaza, it does not say what actions the UN will take to stop these injustices. Nor, he argues, does it even fully acknowledge that the disaster in Gaza is not a natural disaster, but “man-made, by apartheid Israel.”

Consequently, for Eid, the only productive sphere to invest energy in for political change is civil society. Specifically, he sees “our only window of hope... [as] the BDS campaign.”

The report described Gazans suffering from regular electricity blackouts and unsafe drinking water. It also focused on the effects of Israel’s 2014 military attack – namely, how it caused Gaza’s GDP to plunge by 15 percent, food insecurity to soar to 72 percent and 500,000 Palestinians to be displaced without hope for home reconstruction.