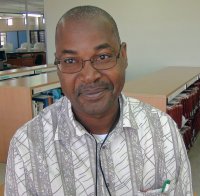 LET US CONTINUE THE MOBILIZATION FOR MOUSSA TCHANGARI

Moussa Tchangari, secretary general for Alternative Espaces Citoyens in Niamey (member of the International Council of World Social Forums) and member of the Board of the Foundation Frantz Fanon, has been arrested on Monday May, 18. He was arbitrarily detained in Niamey by the Counter Terrorism Cell originating from the Ministry of Justice. According to his lawyer, the casefile is empty. He was accused of dealing with a terrorist venture by the Ministry of Interior and Public Security.

On the 27 of May, Moussa Tchangari was provisionally released, until the investigation progresses. He remains accused of activities likely to undermine the morale of the troops.

The sole purpose of his arrest was to prevent him from denouncing the many human rights violations experienced by the displaced populations of the islands of Lake Chad – and to maintain a feeling of insecurity within the Nigerian population which allows the State to rule through a strategy of domination and fear.

We must remain mobilized to get the dropping of all charges against him without any basis.

Let us continue the campaign, Moussa Tchangari is innocent