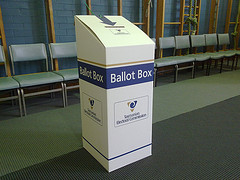 Sudan’s first elections in 24 years are set to begin in less than 22 days. And not without major controversy.

The logistical challenges faced by Sudan’s National Election Commission (NEC) and organizations providing support toward the elections are staggering. According to the a UNifeed report, “The first batch of ballot papers was airlifted to Sudan’s southern capital city Juba, on Friday [March 12, 2010].” The United Nations Development Program (UNDP) is providing logistical support to the National Elections Commission for printing and distributing the estimated 180 million ballot papers to the “close to 15,000 polling centers countrywide,” established by the NEC.

Opposition party Umma Reform and Renewal Party (URRP) accused the United Nations Mission in Sudan (UNMIS) of granting contracts for the printing of the election ballots to printers inside Sudan. UNMIS denied the accusations, saying that they regret the news reports that their Chief Electoral Affairs Officer was involved. According to China Radio International (CRI) English news service, “UNMIS spokesperson categorically dismisses such an allegation as unfounded.”

In a later Reuters report published on AlertNet, opposition parties are demanding an investigation into the Sudanese printing company who holds a contract to print the ballots for executive offices that include presidential and gubernatorial positions. Apparently, the UNDP had planned to give the contract to a Slovenian printer but the NEC intervened and gave it to the Sudanese Currency Printing Corporation, the government printer that also prints Sudan’s currency. It is unclear why the UNDP did not report the irregularity.

Other ballot papers were awarded by the UNDP to South African and British printing companies. Fears of potential fraud are mounting as the Sudanese Currency Printing Corporation could conceivably print illegal ballot papers to manipulate election results by stuffing ballot boxes. This opens the door to the dispute of election results after the voting period and increase instability in an already volatile setting.