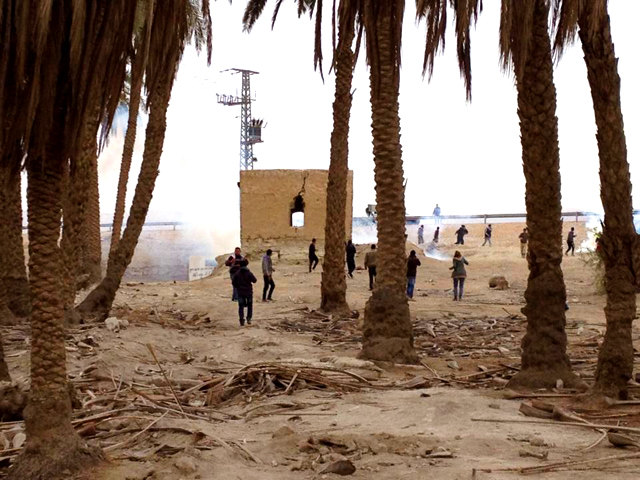 A large number of Israeli army and border police officers who stormed the revived Jordan Valley village of Ein Hijleh several times were confronted by residents of the village. Israeli troops shot large amounts of tear gas, and several cases of tear gas suffocation were registered. One Palestinian activist was hit by a tear gas canister in the foot.

As part of its Melh Al-Ard (Salt of the Earth) campaign, the Palestinian Popular Struggle Coordination Committee began on Friday January 31 to revive the village of Ein Hijleh in the Jordan Valley. The objective of the campaign is to protest the ongoing Israeli annexation of the Jordan Valley.

In the morning of Tuesday, February 4, Israeli soldiers confiscated a banner with the name of the village which was hung by residents over the nearby road 90.

Later in the day Israeli army and police forces attempted to enter the village but were repelled by the residents.

So far the residents have restored a number of houses in Ein Hijleh and continue to work on its reconstruction. The residents also planted 150 trees donated by the Palestinian Agricultural Relief Committees (PARC).

“We are now in our fifth day at Ein Hijleh in the heart of the Jordan Valley, with Palestinian and international volunteers engaged in an act of popular nonviolent resistance against the illegal Israeli occupation and settlement polices and their efforts to keep the army in the Jordan valley . Our goal is to revitalize and restore this village, which was depopulated with the onset of military occupation in 1967, and to preserve our presence in the Jordan Valley, without which there can be no sovereign Palestinian state.

This operation builds on the success of last year’s actions at Bab al-Shams and Ahfad Younis, when we set up tent cities in the so-called “E-1” area outside of Jerusalem, occupying our occupied land in order to show the world the absurdity and brutality of the injustice against the Palestinian people.

This action in Ein Hijleh is more advanced, and others like it have already begun. Beyond symbolism, we are restoring this land and this village for future Palestinian generations, revitalizing “the Salt of the Earth.” We have been repairing the buildings, planting trees, cleaning and clearing the grounds, and preparing for agricultural work. We have set up a clinic and been screening films.

All the while, the Israeli army has been harassing us—setting up checkpoints, encircling the village, confiscating food and water, entering the grounds—in a vain effort to provoke our volunteers to respond with violence or to vacate the land. But we will do neither.

Our action counters the illegal settlement policies of Israel with a de facto constructive Palestinian presence, and we ask the world to show support and solidarity with the campaign, to speak out against discrimination and apartheid. Our mission is not only to free ourselves but also to free the Israelis from this system of oppression and Apartheid.

We invite international delegations to come and join us, to see for themselves with their own eyes, how beautiful, efficient, and powerful this model of resistance is”.