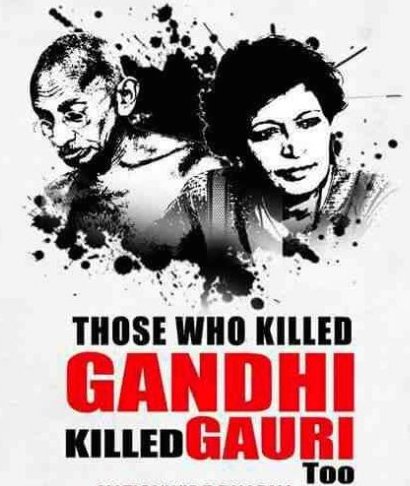 Well-known Indian journalist and editor Gauri Lankesh was gunned down on Sept 5, 2017, by unidentified assailants. Her assassination comes on the heels of murders of M.M. Kalburgi, Govind Pansare, and Narendra Dabholkar - all outspoken critics of right-wing Hindu nationalists, killed in a similar fashion in direct retaliation of their challenging caste and majoritarian tyranny. Their killers are still at large.

Gauri Lankesh’s murder has generated unprecedented and widespread demonstrations and vigils across India, and protests on social media too, as Hindutva (Hindu-nationalist militant) forces and their supporters ratchet up their vigilante violence, attacks and lynching of minorities, lower castes and tribal people they accuse of being ‘anti-national’ and against Hindu tradition, and staff educational institutions only with those who further their agenda of turning India into a fascist, authoritarian state not unlike Germany under the Nazis.

The New York Times wrote recently that the BJP government “has let a climate of mob rule flourish in India, with (its) right-wing Hindu supporters vilifying secularists,” adding: “The venom that reactionary social media trolls direct at journalists, or “presstitutes” as they call them, is especially vicious....”