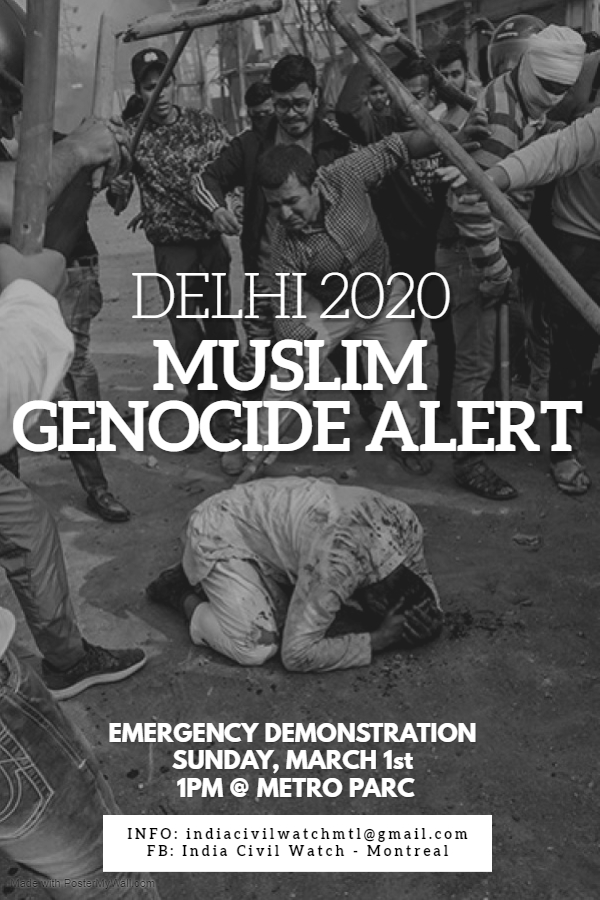 Montreal, February 29, 2020. At 1pm, on Sunday, March 1st, at Metro Parc, Indians and Canadians based in Montreal are demonstrating to denounce the genocide in Delhi, in solidarity with the Muslims, Dalit-Bahujans (so-called lower castes), adivasis (Indigenous peoples) and other victims and minorities in India who have been subjected to Hindu nationalists’ discriminatory policies.

At least 42 people have been killed and over 140 people have been grievously injured. The goons unleashed an atmosphere of terror by destroying local Mosques and committing acts of arson against Muslim owned establishments, setting on fire a number of neighbourhoods.

In a chilling reminder of the 2002 genocide in Gujarat, India, many incidences of sexual violence against Muslim women were also reported as the goons broke into Muslim homes targetting women and children. Hindus who supported Muslim families during the violence have also been gravely injured and killed.

The attacks were incited by a BJP leader Kapil Mishra to crackdown on the peaceful sit-ins led by the Muslims against the exclusionary and discriminatory Citizenship (Amendment) Act (CAA), 2019 which will render millions of Muslims stateless. The attacks were carried out with full state impunity. In some instances, Delhi Police stood back as spectators of the gruesome violence and in others, it actively colluded with the goons in brutalizing the peaceful Muslim protesters. The attacks were part of a process that seeks to realize the rabidly fascist ethnonationalist project of the BJP government, which aims to establish an upper-caste Hindu Nation. Here, one can witness all ten stages of genocide as outlined by Genocide Watch, including organization, persecution, discrimination and dehumanization.

Repression of Muslims, Dalit-Bahujans, human rights activists, journalists, and intellectuals, has been historically aided and abetted by the BJP and its ideological mastermind, the Rashtriya Swayamsevak Sangh (RSS). The pace and the nature of repression against minorities has only intensified since May 2019 when the BJP led by Narendra Modi came to power for a second term.