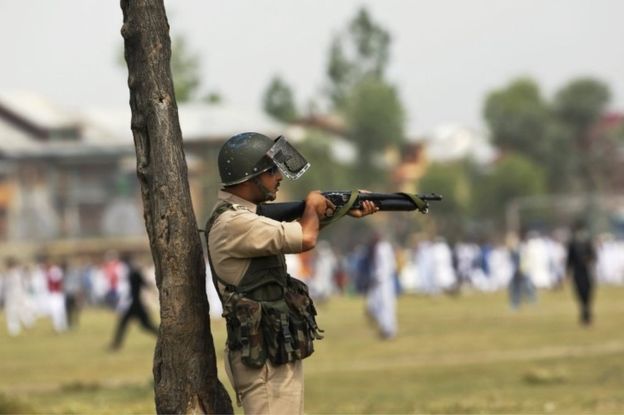 The Indian government’s push, through a pliant media, for the use of plastic bullets bodes disaster for Kashmir

One has to muster every last ounce of one’s incredulity at the latest hare-brained idea to use plastic bullets for crowd control in Jammu and Kashmir.

We are told by The Times of India that “non-penetrative plastic bullets may be used in Jammu and Kashmir for crowd control or stone-pelting mobs to reduce collateral damage during counter-insurgency operations”. The South Block oracle has spoken. You shall gulp it, hook, line and sinker, without a simple ‘where, what, why and how’, query.

We are informed, “The government sources, however, said the pellet guns will continue to be used as the last resort in the non-lethal category.” Please suspend all reasoning as a plastic bullet makes the medicine go down. Apologies, Dr Dolittle.

Plastic bullets, if you please, are not plastic. They are plastic-coated metal bullets. And the hype about them being “non- penetrative”! Tell me another fairy tale.

A paper known more for its matrimonial ads than its editorial content sagely echoes some government spokesperson illiterate in technology or ballistics: “Plastic bullets can be fired from a normal AK-47 rifle but in a single shot mode. Burst mode firing is not possible with them.”

Contrast this with the well known democratic Israeli paper Haaretz, which “learned that soldiers sometimes separate the rubber-coated bullets, which come in packs of three, and insert them separately into the adapter on the rifle muzzle to achieve a more harmful effect — even though the army forbids this”. So much for fact-checking by the ever gullible mainstream Indian media!

In an appeal to the High Court of Justice in Israel, the deputy chief of army staff declared: “Because of the characteristics of the plastic bullet, which are quite different from those of live ammunition, the correct use of this bullet at certain distances is not supposed to be fatal.”

The deputy chief of army staff explained the restrictions on the use of plastic bullets: “The soldier must aim the weapon to strike below the knee. He must avoid aiming at the legs of women and children. He must observe a minimum and maximum range when firing plastic bullets.”

However, from “testimony of officers in the Israeli army reserves” given to B’Tselem, the following facts emerge:

Training in the use of plastic bullets lasts for less than a minute, using 3 bullets (one round) at a distance of 70 meters.

Instructions stipulate that firing must be from a minimum distance of 70 meters, and not after physical exertion.

Estimating a distance of 70 meters is difficult by day and even more difficult at night.

There is no certain method of ensuring, even for experienced snipers, when firing from a distance of 70 meters, that the weapon is aimed precisely below the knee. The plastic bullet is less heavy than the regular bullet, and its aim is less accurate.

At a distance of 70 meters it is difficult to distinguish with certainty the age of children.

In a situation where the soldier is engaged in dispersing riots, he will often have to fire after engaging in physical exertion.

The claim that the plastic bullet is not fatal results in the “trigger-happy” phenomenon.

I would be happy to evaluate the training manuals of the Central Reserve Police Force and the Jammu and Kashmir Police on this. Any takers?

In a written opinion, the eminent Israeli surgeon Dr Yitzhak Vinograd notes that “the kinds of injuries resulting from live gunfire are also caused by plastic bullets fired at short range”. “Shooting from a long range can also be very dangerous,” he writes. “In my view, the use of plastic bullets has an immediate fatal potential at short range, and from a distance of more than 70 meters there is also the possibility of later fatal complications, several days after the injury, as a result of untreated infection.”

A government spin doctor goes to India Today to sell plastic bullets and they buy the yarn. “A top officer of the MHA said, ‘We have conformed to highest standard by going with options mentioned in UN Pre-Deployment Training standard list. Our aim is to prevent any civilian casualty and minimise collateral damage.”

The sheer number of injuries inflicted on non-combatant civilians in Kashmir gives lie to this gentleman’s assertion. He is being economical with the truth. He should perhaps read the United Nations Infantry Battalion Manual, which forbids the use of “weaponry like rifles” by UN forces “until and unless the level of threat is elevated to one of a military nature.” Instead, it insists on the use of “non-lethal weapons” such as Oleoresin Capsicum spray, tear gas, smoke grenades, water cannons, flash and stun grenades. The use of rubber bullets by UN police units is banned by the Department of Peacekeeping Operations. Reading this manual would be quite instructive for all in India’s home and defence ministries.

Ravi Nair is executive director of South Asia Human Rights Documentation Centre. He is a recipient of the MA Thomas National Human Rights Award and the All India Muslim Majlis-e-Mushawarat’s Lifetime Achievement Award for his work on the defence of minority rights in India. Feedback at ravinairsahrdc@gmail.com