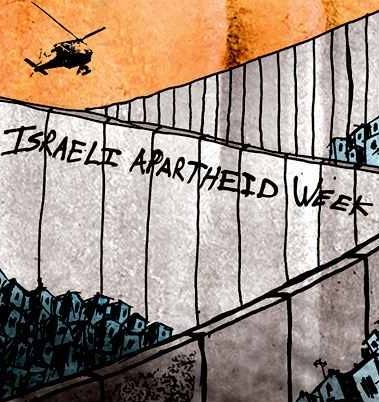 Tear Down This Wall

This week, for the sixth year in a row, Israeli Apartheid Week (IAW) events are taking place on campuses and communities across Canada and worldwide. It’s also during this week that Conservative MP Tim Uppal of Edmonton will rise in the House of Commons to introduce a motion to condemn IAW, seeking the unanimous approval of all MPs.

Uppal’s anti-IAW motion adds to a recent spate of similar statements and motions— from the MPPs of Ontario’s Legislature to Federal Opposition Leader Michael Ignatieff— not to mention numerous editorials and op-eds in the pages of Canada’s mainstream newspapers, including a National Post editorial not-so-subtly entitled "A festival of bigotry". In sum, the public condemnations of Israeli Apartheid Week are an extraordinary— and arguably unprecedented— rhetorical attack by the highest levels of Canada’s political class on autonomous organizing and free speech on Canadian campuses.

It’s a platitude to state there is wide disagreement between pro-Israel and Palestine solidarity supporters on even basic understandings of history and contemporary events. But the recent critics of IAW allege bigotry, hatred and anti-Semitism, using language that is meant to smear. Another platitude: you can disagree with the use of the term apartheid in relation to Israel, but it can certainly be the basis for a rational discussion, debate and disagreement.

In all the rhetoric condemning IAW, never has one shred of clear proof been offered to indicate that any words or actions by IAW speakers or organizers are linked to anti-Semitism. In reality, IAW is organized by diverse groups of students and political organizers, including both Jewish and Palestinian organizations and individuals. IAW is rooted in social justice organizing, which unequivocally and pro-actively condemns racism and anti-Semitism in all its pernicious forms. Jewish anti-occupation groups such as Independent Jewish Voices and Not In Our Name actively support IAW.

In light of recent motions and statements that equate calling Israel an apartheid state with anti-Semitism, it’s instructive to remind ourselves about the different people who’ve applied the term previously and recently.

In Israel itself, various politicians, including current Defense Minister Ehud Barak, have used the term. In Barak’s words, as reported by the Economist in February 2010: "If, and as long as between the Jordan and the sea, there is only one political entity, named Israel, it will end up being either non-Jewish or non-democratic... If the Palestinians vote in elections, it is a binational state, and if they don’t, it is an apartheid state."

Several South Africans who understand firsthand the reality of South African-style apartheid have made the connection as well, from Desmond Tutu to John Dugard, formerly the UN Special Rapporteur for Human Rights in the Palestinian territories.

This week, Michael Ignatieff described Israeli Apartheid Week as "counter to our shared values" and urged "all Canadians to join with us in condemning Israeli Apartheid Week." But the 2010 version of Michael Ignatieff needs to speak with his 2002 edition. Writing in the Guardian (before the separation barrier or "Apartheid Wall" was constructed inside the Palestinian occupied territories), Ignatieff wrote: "When I looked down at the West Bank, at the settlements like Crusader forts occupying the high ground, at the Israeli security cordon along the Jordan river closing off the Palestinian lands from Jordan, I knew I was not looking down at a state or the beginnings of one, but at a Bantustan, one of those pseudo-states created in the dying years of apartheid to keep the African population under control."

Clearly, the apartheid comparison is fair grounds for discussion and debate, at least by Israeli politicians, South African human rights advocates, and Michael Ignatieff before he became a politician.

What the political and media attacks on IAW amounts to is a form of neo-McCarthyism. Classic McCarthyism dismissed progressive movements as treasonous agents of a foreign Communist regime, offering little to no evidence to back up their destructive smears. It was a useful tool during the Cold War to marginalize and silence left-wing dissent. Similarly, the 2010 neo-McCarthyism dismisses certain critics of the state of Israel as anti-Semites, particularly those who support the Palestinian civil society call for Boycotts, Divestment and Sanctions against Israel, and are skeptical of the justice of a "two-state solution".

The extraordinary condemnation of IAW by Canada’s politicians doesn’t show any particular insight into the Israel-Palestine conflict, but rather obliviousness to grassroots solidarity organizing that grows in its effectiveness each year. If readers are curious about what has provoked Canada’s politicians to near-unanimously take steps to condemn a series of modest educational events organized mainly by students on campuses across the country, I encourage them to consult www.apartheidweek.org and to attend an IAW event in your community. Make up your own mind.

This article was written by Jaggi Singh, who has organized in support of Israeli Apartheid Week in Montreal for five years.