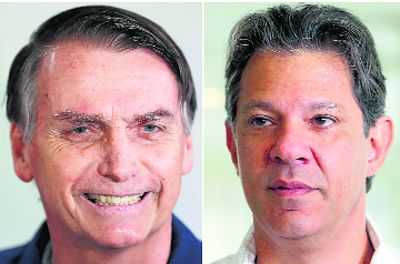 A white backlash much like India’s upper caste consolidation makes it appear that the right-wing candidate might win in the second round as he was close to the 50 per cent threshold in the first round. But the left candidate might win if the dynamics of voting intentions changes in the next few weeks.

The results of the first phase of the general election in Brazil on October 7 have attracted worldwide attention because Bolsonaro, a right wing candidate for Brazil’s presidency, has surprisingly received significantly more votes than his rival Haddad, a candidate of the centre-left party, popularly known as the PT.

In one sense, this global attention is justified because Brazil is the largest and most important economy in Latin America, and by virtue of its membership of the BRICS (Brazil, Russia, India, China and South Africa) bloc of countries, it is an important economy and nation. However, overemphasis on the first phase of this election and only on the voting for Brazilian presidency is somewhat misplaced because of broad unfamiliarity with the complexity of the election process in Brazil and the limitations on the powers of the president in the structure of governance architecture in Brazil.

Voting is mandatory in Brazil unless one can prove sound reasons for having to be absent from one’s place of voting. In this first phase of the election, the abstention percentage (20.6) was a bit higher than the normal and could have implications for the second round of voting. The voting took place for the office of president as also for electing a governor for each of the 27 states, two-third of the 81 members for the senate (three for each state) and for the central parliament (513 seats) and provincial parliaments.

For the election to the presidency and governorship, a candidate must secure more than 50 per cent of the valid votes to be successful straightaway in the first round, otherwise voting moves to the second round between the two most voted candidates in the first round.

Overall, the right has made substantial gains, but the left remains a powerful force. The centre-left PT, whose candidates Lula and Dilma have been elected to presidency in the past, has emerged as the largest party in the central parliament. The PT has won 56 seats and Bolsonaro’s right-wing party PSL is behind it with 52 seats. The remaining seats are shared among parties, some very small, politically ranging between different shades of left, centre and right. The winner will be forced to build a coalition with other parties to secure majority vote in parliament to pass any legislation. This system should ensure inbuilt institutional and democratic check against monopoly control of political power.

Two things that might decisively affect the voting in favour of Haddad are the changed preferences of the abstentionist voters from the first round and women voting in large numbers against Bolsonaro because of his anti-women views.

The establishment in Brazil, that includes the industrial, financial and large landowning capitalist classes; military, judiciary and corporate-controlled media have acted in unison in creating an impression that the PT is the main source of corruption in Brazil. This propaganda does not affect the poorest, black racial minority and the indigenous sections who have experienced palpable improvements in their living conditions due to PT’s welfare and social protection policies. These sections concentrated more in the north and north-east Brazil have voted decisively in PT’s favour in the first round itself. However, a section of the white middle class, especially in the south and south-east, is influenced by the anti-PT media campaign, partly because it resents PT-led government’s the pro-poor reservation policies in education, housing and jobs.

If the right-wing Bolsonaro wins in the second round, the regime will try to introduce strong neo-liberal pro-market agenda by dismantling all elements of the state welfare support structures created during the PT-led governments.

If the centre-left Haddad wins in the second round, there is no doubt that the establishment will defend its class interests by launching coordinated economic and political campaigns against any alternative initiatives that the Haddad-led government would attempt to undertake. A section of the establishment does not agree with the Bolsonaro perspective on cultural issues, such as his anti-gay, anti-women and anti-black views. There are conflicting economic interests too between the factions of the ruling classes, but the establishment will act in unison in defence of the economic reforms proposed by Bolsonaro, especially relating to limitations of labour rights.

The outcome of the second-round voting in Brazil will not only impact the political and economic debates, discourse and policies immediately in the neighbouring Latin American countries, but its ramifications will also be felt far beyond that continent in terms of ongoing struggles between democracy and authoritarianism.