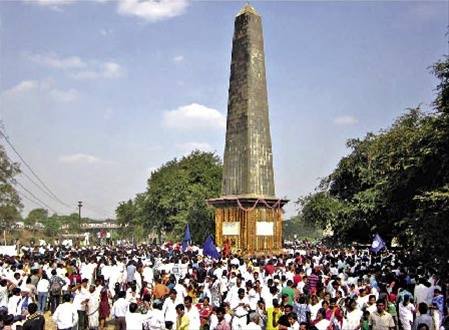 On 24 January 2020, the Bharatiya Janata Party (BJP) led central government abruptly transferred the inquiry into the Bhima Koregaon case from the Pune Police, in the state of Maharashtra to the National Investigation Agency (NIA) which is a central agency. The move has been criticised by human rights defenders and has raised serious concern regarding the course of the investigation. The case involves nine human rights defenders – Sudha Bhardwaj, Vernon Gonsalves, Varavara Rao, Arun Ferreira, Sudhir Dhawale, Rona Wilson, Shoma Sen, Mahesh Raut and Surendra Gadling – who have been in detention since 2018.

The decision to transfer the case to the NIA is seen by human rights defenders as an attempt to maintain control over the political narrative on this case, in which nine human rights defenders are incarcerated and several more are falsely implicated. In June 2018 five human rights defenders, Sudhir Dhawale, Rona Wilson, Shoma Sen, Mahesh Raut and Surendra Gadling, were arrested followed by the August arrest of Sudha Bhardwaj, Vernon Gonsalves, Varavara Rao, Arun Ferreira and Gautam Navlakha. All those arrested with the exception of Gautam Navlakha remain in jail, with their bail applications postponed or denied. Several other HRDs had their homes and offices raided, were labelled as urban Naxals and were the subject of false propaganda and a misinformation campaign by Indian authorities. The detained defenders are accused, without any clear basis, of inciting the violence that took place at Bhima Koregaon on 1 January 2018. They are also accused of sedition; criminal activity and conspiracy against the State. Front Line Defenders has previously raised concerns over the safety of the human rights defenders falsely implicated and has called on the Indian state to cease reprisals against human rights defenders based on their peaceful human rights work.

Following the State elections in Maharashtra the new government set up a Special Investigating Team (SIT) to inquire into the case. Given the hostile conditions for human rights defenders under the previous BJP led state government, there was hope among defenders of a positive resolution and greater protection for those involved under the new government and the SIT. The decision to transfer the case to the NIA and remove it from the State police comes in the wake of this development and may be interpreted as an attempt to prevent the new government in Maharashtra from carrying out a review of the controversial inquiry into the case. Effectively the case is back under the control of the BJP led central government. This has raised fears of the prolonged detention of those already in jail and further targeting of local defenders on account of their work.

Human rights defenders have consistently sought an independent probe in this case. In September 2018 the Supreme Court of India rejected a petition seeking an independent court-monitored probe. The then BJP led state government vigorously opposed the petition for independent monitoring. Prior to 24 January 2020, there had been no attempt by the central government or the previous state government to direct the case to the NIA.

Front Line Defenders believes that the nine human rights defenders currently in jail and others implicated in this case are being targeted due to their work in the defence of human rights. It believes that the timing of the transfer is a matter of serious concern as the investigation is over and pending adjudication in the court. It is an attempt to undermine an independent inquiry through a Special Investigation Unit and further compromise the safety of the human rights defenders involved.

Front Line Defenders reiterates its calls to the authorities in India to:

1. Ensure an independent thorough and impartial inquiry into the Bhima Koregaon case and the targeting and false imprisonment of human rights defenders related to this case, free from all political interference;

2. Immediately and unconditionally release from jail, Sudha Bhardwaj, Vernon Gonsalves, Varavara Rao, Arun Ferreira, Sudhir Dhawale, Rona Wilson, Prof Shoma Sen, Mahesh Raut and Surendra Gadling and return any property seized, as Front Line Defenders believes that the human rights defenders are being held solely as a result of their legitimate and peaceful work in the defence of human rights;

3. Immediately and unconditionally drop the charges against the nine human rights defenders;

4. Conduct an independent, thorough and impartial investigation into the widespread violence organised against human rights defenders, in the aftermath of the Bhima Koregaon commemoration;

5. Guarantee in all circumstances that all human rights defenders in India are able to carry out their legitimate human rights activities without fear of reprisals and free from all restrictions.