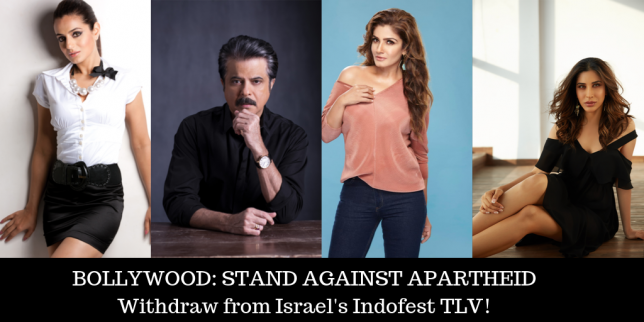 We, members of the artistic community in Canada and the USA, appeal to the actors from Bollywood to withdraw their participation to the Indo Fest TLV to be held in Tel Aviv, Israel later this month.

We make this appeal because Israel overtly uses culture as a form of propaganda to deny human rights to Palestinians and justify occupation and apartheid type of horrors against the Palestinian people. Just as South African anti-apartheid activists had called on international artists, writers and cultural institutions to culturally boycott South Africa, we are urging the Bollywood artists to call off their visit, like hundreds of artists from world over.

An appeal* from the Palestinian BDS committee has been circulating regarding this matter.

A senior representative of the far-right Israeli government, urged Bollywood producers to invest in Israel during a trip to Mumbai. He admitted that the aim of his visit was to “fight BDS”. Israeli prime minister Netanyahu said, “we want Bollywood in Israel”.**

These events are part of the ‘Brand Israel’ project, which works hard to exploit the Indian film industry to whitewash, or art-wash its violations of international law and Palestinian human rights.

While Israel is using Bollywood to cover up for its crimes, it is selling arms worth over a billion dollars each year to India. Israel’s drones, guns and missiles are fuelling India’s militarization, most evident today in the over two month long blockade in Kashmir.

We appeal to the actors of Bollywood industry to boycott the festival and stand in defense of and in solidarity with Palestinian human rights. Request to do so is coming from the Palestinians living under Israeli occupation.