Home > English > NEWS AND ANALYSIS > Another Iraq is Possible! 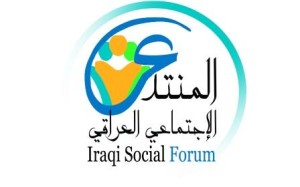 Another Iraq is Possible!

Another Iraq is Possible! With Peace, Human Rights and Social Justice!

We invite you to attend and seek your support for the first Iraqi Social Forum [ISF] to be held on September 26-28, 2013 in Baghdad, Iraq .

Active international solidarity is the need of this hour!

The Iraqi Social Forum is an extraordinary event that opposes decades of immense violence and destruction. It proposes a time and a space managed by civil society and social movements to build another Iraq based on peace, respect for human rights and social justice, in partnership with all those who adhere to the principles and charter of the WSF, adopted in Porto Alegre in 2001.

The loss of the lives of over one million people, the destruction of infrastructure, fatal and debilitating effects of depleted uranium and chemical weaponry used by the occupation forces cannot be forgotten, neither by the Iraqi people nor by the international movements who have been mobilizing against the war and the occupation.

The withdrawal of the US and occupation troops has opened the way to complete the struggle of Iraqi people for democracy and social justice, but the current Iraqi leadership has been built on sectarian lines, and does not guarantee the rights and safety of its citizens. Hundreds of thousands have protested in the streets of Iraqi cities since 2011 against corruption, for social services, for freedom of expression, and for an independent judiciary system. More than 2600 Iraqis have been killed since April 2013 in terrorist attacks, most of them in Baghdad. Still Iraqi civil society acts for change.

Now it is the time to all work together to build a way for hope to emerge, and to contribute to the desires of the Iraqi people for a civil, democratic society and State, based on respect for different cultures. The country is experiencing a political, economic and social crisis: this is the time to build partnerships, foster dialogue and cooperation, to find solutions to outstanding problems. Now is the time to end violence and terrorism for which the people of Iraq have paid, and continue to pay, a heavy price. These are the challenges of the Iraqi Social Forum, we believe that these are our shared challenges!

The WSF process is now well anchored in the region. Since 2008 we have witnessed successful regional social fora in the Maghreb/Mashreq, a World Education Forum in Palestine and the World Social Forum in Tunis earlier this year. These collective experiences provide a fertile ground for the Iraqi civil society to build the first Iraqi Social Forum as an open space for exchange of experiences and ideas, and to build a movement against neo-liberalism, for social change.

Iraqi civil society organizations will raise the following issues within the ISF: building a civic and democratic country; challenges faced by minorities; equitable distribution of wealth and social justice; trade unions, and peasant associations; rights of women, youth, children; economic, social, and cultural issues; nonviolence as a way of social, cultural, and economic change in Iraq; international solidarity campaigns with the Iraqi civil society. Sports Against Violence and Artistic activities will be associated to the forum.

The world witnessed huge demonstrations, unparalleled in the history, against the US invasion of Iraq. This international solidarity is now once again being convened in support of the Iraqi Social Forum. International participation in the Baghad ISF forum event will be limited in numbers for security reasons, but the ISF preparatory committee is looking for a venue in Baghdad safe enough for some internationals to attend. We strongly encourage your remote participation from your own country, via the “Extended Iraqi Social Forum”.

Please consider the following ways of joining us:

1) Be with us in Baghdad. Be aware that this entails a certain degree of risk, and that we will confirm international participation only in early September depending on the situation. Meanwhile, you need to register before the 15th of August in order to receive a letter of invitation and apply for the visa at the Iraqi Embassy in your country.

You will be contacted individually after submitting the application form here: http://www.iraqicivilsociety.org/registration-form-iraqi-social-forum-2013

2) Extended ISF. Organize a solidarity event in your own country, before or during the ISF, or a live exchange via Internet with a group in Baghdad , or a tele-participation in an activity held in Baghdad . A group of Iraqi volunteers is being trained to help connect with counterparts who want to exchange via Internet. Define with the local organizers which ISF activities will be enlarged for Internet participation, and build the corresponding connections.

You can learn more about the Extended forum and announce each of your extended collective participations in the ISF in a form accessible here: http://www.iraqicivilsociety.org/extended-iraqi-social-forum-registration-form

Let us know if you are willing to participate!

Member organizations of the Iraqi committee:

Members of the international committee: